Three men in Bangladesh have been arrested for allegedly hacking a Hindu man to death over the weekend, the latest in a series of murders by fundamentalists claiming to represent militant groups like the Islamic State of Iraq and Greater Syria (ISIS).

The three suspects in the murder of Nikhil Joarder include a leader from local Islamist group Jamaat-e-Islami and a member of the opposition Bangladesh Nationalist Party, the Dhaka Tribune reports. ISIS had earlier claimed responsibility for the attack.

The Bangladeshi government, however, continues to insist that the international terror group has no presence in the country.

Read more: Here’s What You Need to Know About Growing Extremist Violence in Bangladesh

Joarder, a 50-year-old tailor, was hacked to death by three assailants on a motorcycle in a suburb of the country’s capital Dhaka on Saturday afternoon and died on the spot. He is the fifth victim this month of purported Islamic fundamentalist attacks, following the killings of a gay-rights activist, a university professor and a law student within the past three weeks. At least one of those attacks was claimed by Ansar al-Islam, a local offshoot of international militant group al-Qaeda.

Bangladesh has seen a sharp rise in sectarian attacks by Muslim extremists over the past year, with at least a dozen people, including several atheist bloggers, an Italian priest and a Japanese aid worker, being attacked and killed. 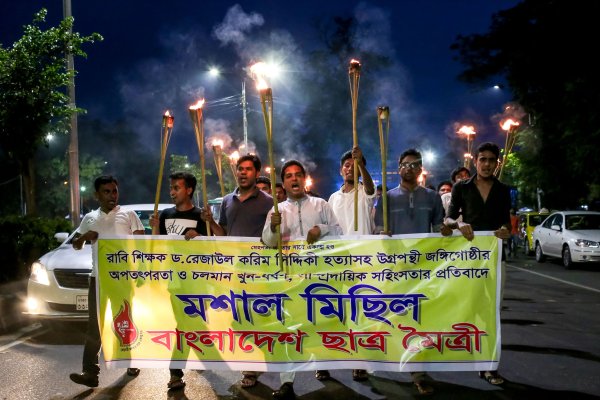 Extremist Violence Grows in Bangladesh
Next Up: Editor's Pick