If sport is a quest for the epic then this English premiership football season is one for the ages. Little Leicester City has spent most of its 132 years flitting between the top two tiers of English football. Their best-ever finish to a season came when they finished second in 1929. Last year only an end-of-season rally allowed them to avoid being relegated from England’s top flight yet again. And when this season began, almost every pundit assumed the Foxes, as Leicester are known, would again, at best, be embroiled in a dog-fight to avoid relegation. That has been Leicester’s way; that has always been Leicester’s fate.

Even the appointment of Claudio Ranieri, a 64 year-old Italian, as manager did little to inspire confidence. Ranieri’s peripatetic 30 years in management had seen him take command at no fewer than 15 clubs in Italy, Spain, France and England without every winning a title. He was respected as a nice guy who always finished, at best, second. In Italy, Jose Mourinho, then in charge at Internazionale, had mocked Ranieri as “Zero Tituli” – “No Titles”.

Revenge is a dish to be savoured, however, and certainly not one to be rushed. Ranieri has had the last laugh and no-one, anywhere, can begrudge him it. He has taken a team of no-hopers and led them to the kind of glory that’s so improbable it belongs to the realm of fanciful Hollywood movies. No-one in English football has seen anything like this in the modern age. It is a year that will never be forgotten.

Unlike American sport, European soccer is based on ruthless meritocratic principles. There is no draft to assist weaker teams, no salary-cap to minimise the advantage enjoyed by large-market teams. Television money is shared, but not on an equal basis. If American sport is organised, at least to some extent, on the Marxist principle of “to everyone according to their needs, from everyone according to their means”, European soccer prefers the bracing clarity of the free-est of free markets.

Read More: What to Know About the Greatest Cinderella Story in Sports History

That’s why suggestions Leicester’s run to glory is akin to a major league baseball or NFL team’s progression from last-to-first in a single year miss the mark. A much more fitting comparison is with college football. Leicester’s race to the English title is like Northern Illinois or Tulsa defeating Alabama, Ohio State, LSU and Florida State en route to winning the college football national championship. The kind of thing, in other words, that doesn’t happen because it cannot happen. It stretches your power of disbelief beyond breaking point.

Leicester’s wage bill of around £50m this year is barely a quarter of what clubs such as Manchester United, Chelsea, Manchester City and Arsenal have spent. It is an iron law of modern soccer that money buys success. The global free market in players allows the wealthiest sides to purchase the world’s best players. High-end talent is concentrated like never before.

The results have been predictable. In England, every championship since 1996 has been won by one of the five wealthiest sides. In Germany, Bayern Munich and Borussia Dortmund have, between them, won 18 of the past 22 titles. In Italy, the ‘Big Three’ of Juventus, Internazionale and AC Milan have won all but two of the championships held since 1991 while in Spain either Barcelona or Real Madrid has won 26 of the last 31 titles. Moreover, most of the gatecrashers in this period – clubs such as Roma in Italy or Atletico Madrid in Spain – have been large clubs capable of dreaming that the title might one day be there’s. They have not, in the main, been provincial nobodies like Leicester.

Leicester’s success is a throwback in another way, too. Ranieri’s side lacks the ability to play the Barcelona way, so they do not try to. Ever since Barcelona – and, on the international stage, Spain – first bewitched the world, controlling possession has been the trendiest, most fashionable, concept in soccer. Barcelona’s “tiki-taka” style is inspired by a simple idea: if your opponents do not have the ball, they cannot score.

Leicester do not play that way. Only two premiership sides have held the ball for less time than Leicester this season. On average this season, Leicester have had the ball for just 43 percent of the time. Instead their triumph has been built upon a rock-solid defence and lightning-fast counter-attacks. The speed with which Leicester attack when they do have the ball has confounded opponents all season long. Ranieri’s tactical astuteness has been married to an unquenchable never-say-die spirit that has kept Leicester afloat long past the point at which it had been assumed they must sink and drown. Everyone is a believer now; everyone feels a little better for being a soccer fan because of Leicester City’s achievement this season. They have reminded us what sport is all about.

And all this has been achieved by a team of cast-offs, misfits, and journeymen. No-one else wanted Leicester’s players; if they had these players would not have been at Leicester. N’Golo Kante, the leading tackler in the league this season, was playing in the French eighth division five years ago. His performances for the Foxes have made him, in the view of the legendary Manchester United manager Alex Ferguson the best player in England’s top-flight “by a long way”. Kannte’s story is typical of the Leicester fairytale. Riyadh Mahrez, named the player’s MVP last month, cost Leicester just £400,000 — or less than Europe’s richest players make in a week — and began his career in the French seventh division. Jamie Vardy, Leicester’s chief goalscorer, was until recently playing non-league football and working in a factory making medical splints. He’s now an England international.

Like many of Leicester’s players, Vardy was released by a bigger club earlier in his career. Almost without exception Ranieri’s players have experienced the bitter reality of rejection. For years they were told they weren’t good enough, as individuals, to play in the upper echelons of European football. Collectively, they have used this to their advantage. The longer Leicester’s improbable challenge lasted the greater the expectation that they would choke, leaving nothing but the wistful memory of what might have been.

But, guided by the unflappable Ranieri, Leicester has shrugged-off pressure that might have crippled another side. They weren’t “supposed” to be here, so they might as well enjoy the ride for as long as it lasts. Paradoxically, it has been easier for Leicester to cope with the pressure than it might have been for, say, a side like Liverpool weighted down with history and the need to rekindle the memory of past glories by winning the title for the first time in more than 20 years.

Of course they have enjoyed some good fortune. Jose Mourinho’s Chelsea went off the rails early in the season, leading to the Portuguese manager’s dismissal. Arsene Wenger’s powers of inspiration at Arsenal appear exhausted. Manchester United have still not successfully managed to replace Alex Ferguson, the greatest manager of the modern era. Most of England’s wealthiest clubs have, for reasons unconnected to Leicester, struggled this season. Even so, no-one but no-one thought Leicester could be the club to take advantage of this weakness.

It shouldn’t make sense. It still doesn’t make sense. As Ranieri has said, “Once in [a] life, it could happen. This is football. Every fifty years a little team with less money beats the biggest. Once.” That’s why this season has been so special. Even if reality returns with a vengeance next season and English football is once again dominated by the biggest battalions no-one will ever forget these little Foxes. They have rewritten the rulebook and, in the process, reminded us all of what sport is really all about: the joyous search for glory. It has been a thrilling, heartwarming, ride all the way to the finish line. An epic adventure of the kind that’s supposed to be impossible. No wonder it has captured the imagination of soccer fans across the world. This is what it’s supposed to be about. This is it. 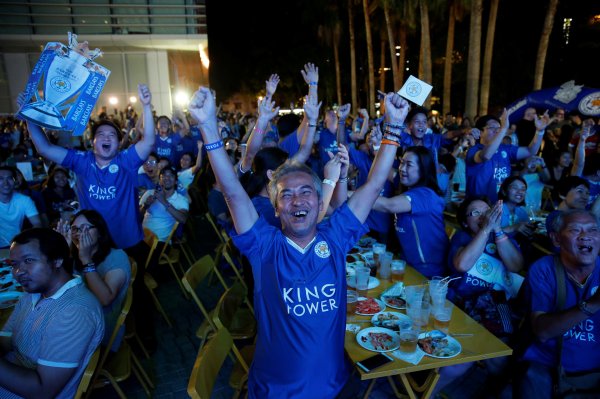