A body full of what ought to be pulverized bone tumbles through a floor of rotten timber, rolls, rises, spots an enemy, lunges and punches. Bullets tattoo a mud-gunged Henley tee, but our hero brushes them off with aplomb. After a kick and withering rifle-stock jab, the bad guy crumples. Up comes a rifle (plus a few well-aimed grenades) and assailants drop in droves. This is no mere human, but Nathan Drake, the stubbled swashbuckling protagonist of Naughty Dog’s PlayStation 4-only Uncharted 4: A Thief’s End, out May 10.

It’s the sort of gratifying, pulpy action sequence you’d expect from a series about doing impossible things in impossibly beautiful locations. But for some reason it’s prefaced by hours of lurching exposition, including a retcon designed to give Nate a long-lost brother named Sam, who seems at first like a gimmick to lure Nate from his state of home-bound bliss. Yes, our hero’s hung up his shoulder holsters as the game opens, settled with love interest Elena and resigned himself to working commercial salvage.

This, unfortunately, lets players experience Nathan Drake as domestic bore: An early level has you scuba-dive to find the wreck of a semi-truck, swimming cables around tether points so you’ll understand how to use the winch on a jeep you won’t encounter until hours later. Another has you ambling around your cluttered attic, dusting off relics from old adventures before putzing around with a toy gun and making wisecracks. Instead of angling for lost cities and buried treasure, you’re stamping papers in a dingy office and taking potshots at dangling bullseyes with ping-pong balls instead of bullets.

Then Sam shows up with a price on his head and a promise of pirate treasure to clear the cobwebs away and, quickly, you’re slipping on that well-worn pair of Timbs. Here’s an opulent Italian manor you’ll plumb from wine cellar to rooftop searching for treasure clues. There’s some Scottish ruins you can clamber over after an hour or two of craggy Alpinism. Now see if you can scale a bunch of sun-beaten towers in Madagascar bristling with enemies and squirreled away collectibles.

Some have groused the climbing sequences in these games run on autopilot—that nudging a thumbstick in the direction you want to go and effortlessly moving forward amounts to choreographed mountaineering. It’s a criticism premised on a misunderstanding: Uncharted was never about anguishing over jumps or mastering light Newtonian physics. If you want that experience, go play the older Tomb Raider games.

If, on the other hand, you’d rather play something that’s about scrutinizing elaborate set-pieces and puzzling out where to go or how to get there, reveling in the gonzo scenery and connective vertigo, all punctuated by third-person gunplay, play Uncharted.

Uncharted 4 has answers for the complainers anyway, especially the new open levels that support multiple throughways (impeded by potential wrong turns and dead ends). You have to actually explore, in other words, and with a few new tools in the bargain, including a piton you can jab into rock walls to climb in areas without finger-holds, and an extensible grappling hook that supports swinging in any direction. But not every direction: Here again, exploring and testing and figuring out how best to proceed yields dividends, whether contemplating oblique routes, or grapple-swinging out of a combat to change things up. Nothing about any of that feels obvious or automated.

Fold in a new stealth layer and season with tactically deft, brutally efficient enemies. Stealth-play wasn’t impossible in the earlier games, but it’s so much more satisfying when you manage to sneak up behind one of Uncharted 4‘s hypersensitive adversaries, encouraging you to study enemy behavior and ply potential battlegrounds for the best vantages to choke out or drag opponents off precipices. The embiggened levels function like tactical playgrounds, brimming with wraparound overhangs and organic hiding spots that include swathes of waist-high grass or broad leaf undergrowth you can hunker in or creep through.

And that’s just the gameplay. Naughty Dog’s known for bringing processors to their knees, but what the Santa Monica-based studio accomplished here—less a show of raw power than of painterly engineering—verges on sublime. Light off nearby taro fronds or distant vines dims and brightens as clouds pass in front of the sun. Jungle-choked ruins rise crookedly from cliff side foundations like a floating Atlantean paradise. Mist-cloaked mountains frame gobsmacking panoramas that might as well be National Geographic-inspired oil paintings. Foregrounds and backgrounds coalesce in visual pageantry that shouldn’t be possible on 2016-era tech. Nothing you’ve played—on any platform, including PC—approaches what Uncharted 4 looks like.

But the best parts are still the way the characters and story can bolt you to a chair and devour afternoons or evenings. Nolan North as Nate is as always unimpeachable, here joined by Troy Baker (as Sam) in a bit of inspired casting. And while the A-track story about finding a 17th century pirate treasure never surpasses Nate’s past visits to El Dorado, Shambhala or Iram of the Pillars mythology-wise, the B-track about sibling rivalry and friendship and commitment serves up some of the series’ most memorable moments and twists. I can say without spoiling a thing that stuff I was sure would happen didn’t, and things I never guessed were going on turned out to be. 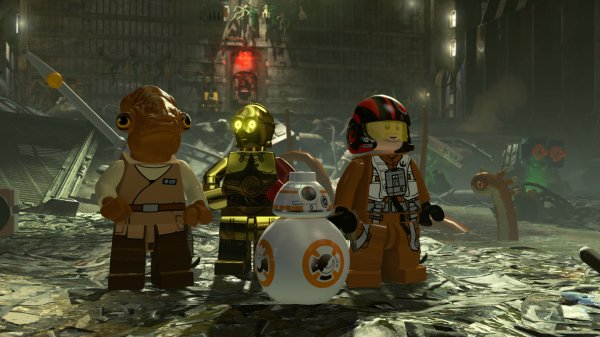 Why Star Wars Fans Will Definitely Want To Play Lego Star Wars: The Force Awakens
Next Up: Editor's Pick