Michael Bloomberg, the former New York City mayor who considered a presidential run this year, blasted the partisan politics and “demagoguery” of the 2016 race in a commencement speech on Saturday, making reference to both Donald Trump and Bernie Sanders.

“In this year’s presidential election, we’ve seen more demagoguery from both parties than I can remember in my lifetime,” the billionaire businessman said, in a column adapted from his remarks at the University of Michigan. “Our country is facing serious and difficult challenges. But rather than offering realistic solutions, candidates in both parties are blaming our problems on easy targets who breed resentment. For Republicans, it’s Mexicans here illegally and Muslims. And for Democrats, it’s the wealthy and Wall Street. The truth is: We cannot solve the problems we face by blaming anyone.”

Trump, the Republican front-runner, has repeatedly promised to build a border wall and get Mexico to pay for it and has called for a ban on Muslims entering the United States. Sanders, a Democratic candidate, has repeatedly targeted Wall Street and the “billionaire class.” Both he and Hillary Clinton have said they will reform big financial institutions if elected.

Bloomberg—who has previously affiliated as both a Republican and Democrat and was considering a run for president as an Independent candidate—criticized “extreme partisanship” and “disturbing” intolerance for other political views in the U.S. and warned that “demagogues are always lurking.” He called on politicians to offer practical solutions instead of “scapegoats or pie-in-the-sky promises.”

“Every generation has had to confront its own demagogues. And every generation has stood up and kept them away from the White House. At least so far,” he said. “Today, when a populist candidate promises free college, free health care and a pony, or another candidate promises to make other countries pay for our needs, remember: Those who promise you a free lunch will invariably eat you for breakfast.” 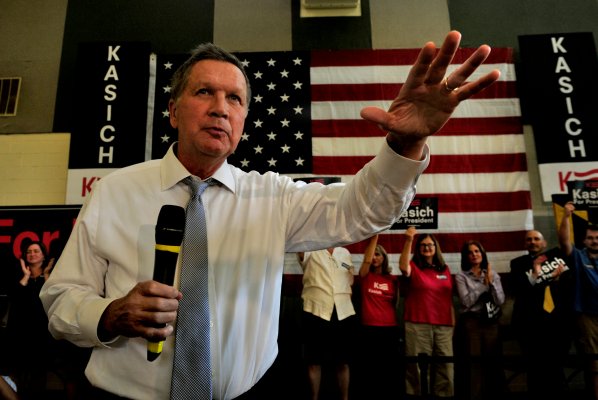