Republican presidential candidate John Kasich said Friday that people are “probably” born gay, when he was asked about it repeatedly by a voter at a forum in San Francisco.

During the exchange, the Ohio governor told Kelly Bryan, a 62-year-old Democrat who said he plans to vote for Hillary Clinton, that he believes in traditional marriage but recently attended the wedding of a friend who is gay, CNN reported.

“Do I think that people are, you know, born gay? Probably,” Kasich said. “I’ve never studied the issue. But I don’t see any reason to hurt you or to discriminate you or make you feel bad or make you feel like a second-class citizen. I don’t think that’s right.”

Bryan later said he asked the question because he’s concerned about recent state laws that many see as discriminating against LGBT rights in the name of religious freedom, according to CNN.

Kasich called for more tolerance and said he would not sign any laws in Ohio that are discriminatory. Republican frontrunner Donald Trump recently split from many conservative leaders in criticizing a North Carolina law that would require transgender people to use restrooms matching the gender they were assigned at birth. Texas Sen. Ted Cruz has voiced strong support for the law.

“In terms of me, I don’t believe in discrimination,” Kasich said. “I think there is a balance, however, between discrimination and people’s religious liberties. But I think we should just try to, like, take a chill pill, relax, and try to get along with one another a little bit better instead of trying to write some law to solve a problem that doesn’t frankly exist in big enough numbers to justify more lawmaking.” 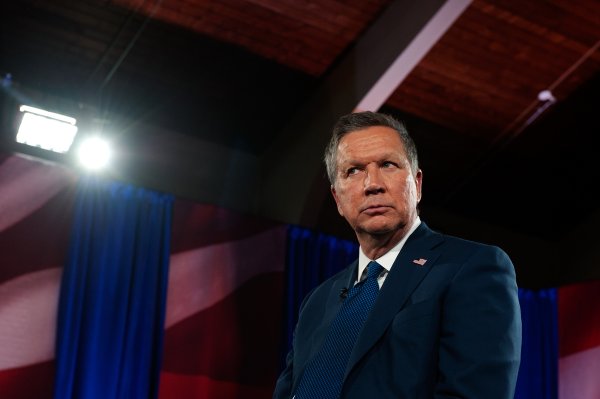