'Most Qualified Pediatrician' Killed in Airstrike on Syria Hospital

One of the last pediatricians in the Syrian city of Aleppo was killed in an air strike Thursday.

Dr. Muhammad Waseem Moaz, 36, was one of more than 50 people killed in the strike on Al Quds hospital, run by Medecins Sans Frontieres in the rebel-held city where experts warn the number of doctors is already limited, the BBC reported.

“Dr. Maaz was martyred due to what staff on the ground believe to be an airstrike perpetrated by the regime or its allies on Al Quds Hospital,” Dr. Mahmoud Mustafa in Gaziantep, director of the Independent Doctors Association, wrote in a statement. “The warplane directly targeted medical facilities, staff and civilians in the area in addition to patients in and outside the hospital.”

In a Facebook post, the director of a separate children’s hospital in Aleppo called Moaz “the city’s most qualified paediatrician.”

“He used to work at our Children’s Hospital during the day and then he’d go to Al Quds Hospital to attend to emergencies overnight,” the director, identified only as Dr. Hatem, wrote. “He was friendly, kind and he used to joke a lot with the whole staff. He was the loveliest doctor in our hospital.”

The Syrian military has denied it targeted the hospital, but locals have blamed the attack on Syrian or Russian planes, the BBC reported. 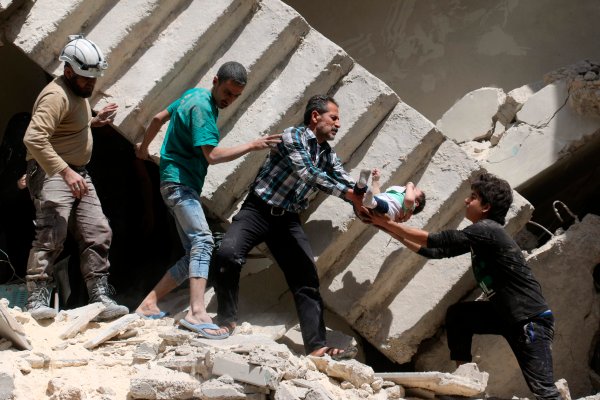 A Toddler's Dramatic Rescue in Syria
Next Up: Editor's Pick