One afternoon in early February, Katja Kipping, a left-wing member of the German parliament, finally got a chance to see the free-trade deal that the U.S. and European Union hope to finish by the end of this year. There were just a few preconditions. She would only get two hours to skim through the complex legal document, which is hundreds of pages long. She would have to surrender her jacket, purse, phone and other electronics before entering the sealed-off reading room at the German Economy Ministry. A guard would watch over Kipping the entire time. And she would not be allowed to tell anyone what she would find inside the agreement.

Read More: Watch the History of Obama’s Presidency, as Told Through His Jokes

“I hope it’s not a crime to speak about this,” she told me recently about the experience. “They didn’t tell me about any clear penalty, but they say it’s forbidden to speak or to write about anything you have read there.” This made our interview feel, at times, like a game of 20 questions, as Kipping would only tell me what she had not seen in the document.

Since initiating the secretive negotiations in 2013, President Barack Obama and his European counterparts have promised that the treaty known as TTIP—short for the Transatlantic Trade and Investment Partnership— would cut the red tape that limits trade between the U.S. and E.U., potentially boosting their economies by a total of more than $200 billion, according to official E.U. projections. But the shroud of secrecy around the deal has not only strained transatlantic relations and provoked a massive popular backlash; it has also been embarrassingly ineffective at keeping the agreement under wraps.

On May 1, the Dutch arm of Greenpeace published nearly 250-pages of confidential TTIP documents, a leak that would seem to include most of what Kipping and other German lawmakers were ordered never to divulge. “Our impression is that this is indeed, as we had feared, a document that puts large corporations, corporate power at the center of policy making,” Daniel Mittler, the political director at Greenpeace International, told me after presenting the leaked files at a press conference in Berlin on May 2. He added: “It is not a treaty that is designed to help small business or, indeed, people and the public good.”

That is exactly the impression that President Obama tried to dispel when he visited Germany last week. Appearing in the city of Hannover alongside German Chancellor Angela Merkel, he urged European leaders to hurry up and finish the agreement, so that Obama might have a chance of signing it before he leaves office. “I know the politics are hard,” he told an audience of German business leaders and politicians at the Hannover Messe, the world’s largest industrial trade fair. “But we have to keep making our case, stating the facts and dispelling any misperceptions.”

Read More: These 5 Facts Explain What Obama Wants From Europe

For Merkel and other TTIP supporters, it has been difficult to dispel the misperceptions around the deal when they are not allowed to publish its actual contents. “I think it’s crazy,” says Sigmar Gabriel, the economy minister in Merkel’s government and the deputy chancellor in her ruling coalition. “It’s not only the Americans. It’s also the Europeans,” he told me on the sidelines of the Hannover Messe during Obama’s visit. “We ask if it’s possible to publish what we have agreed, and they say, ‘No!’”

This has created a bizarre dilemma. In trying to strengthen political and economic ties across the Atlantic, the centerpiece of Obama’s trade agenda seems to be doing the opposite. It has sown widespread anger over what many Europeans see as an American plot to undermine their democracies and national environmental standards. A broad spectrum of German society—from right-wing Eurosceptics and nationalists to left-wing environmentalists and consumer protection groups—have all found common cause in opposing the deal.

Read More: Obama’s Calls for an Open Germany Falter in a Tide of Refugees

In the last few years, their improbable alliance has gathered millions of signatures against TTIP and staged enormous rallies across the country, including one protest that greeted Obama on the eve of his arrival in Hannover. On social media and in the press, the movement against TTIP has also fostered an entire ecosystem of conspiracy theories, which claim that the agreement would allow the U.S. to flood Europe with genetically modified crops, which are largely banned in Europe, as well as with chlorine-tainted chicken and other contaminants.

Partly thanks to this sort of speculation, TTIP has become one of the most toxic issues in German politics, and one that Gabriel has come to personify as his country’s chief negotiator of the deal. All the secrecy has made this a punishing job. “The members of parliament are all angry about it,” he says. And so is a growing segment of the German public. According to a recent nationwide poll, only 17% of Germans consider the free-trade deal a good thing, compared to 55% in 2014, when the negotiations were just getting started.

On April 25, when Gabriel met with U.S. negotiators for another round of talks, his frustration bubbled over. “We are adult citizens. We are adult democracies,” he told his U.S. counterpart, Secretary of Commerce Penny Pritzker, when they appeared at a panel discussion in Hannover. “It must be possible to allow somebody to look” at what’s already been agreed, Gabriel said, because the secrecy around the talks “creates a lot of conspiracy; this creates mistrust.”

It also seems rather pointless. Even before Greenpeace presented its trove of TTIP documents on Monday in Berlin, anonymous whistleblowers have leaked earlier versions of the deal to the public, including once in the spring of 2014. “You will find, after some days or weeks, that the text is in the Internet, because somebody has leaked them,” Gabriel noted rather presciently last week. Yet in spite of these leaks, the U.S. and E.U. still refuse to post official versions of the deal online. “I think sometimes it would be good to be a little bit more, let’s say, flexible,” he told Pritzker.

The U.S. negotiator, who is herself a corporate titan from a powerful family of Chicago billionaires, did not seem moved. “You can’t negotiate something as complex as a trade agreement in the press, where it’s a referendum on every issue,” Pritzker said, echoing an argument that E.U. negotiators have also made in the past. “There is always going to be some element of compromise,” Pritzker said. “So you can’t do it out in the open.” At the same time, she added: “What’s important is that we begin to debunk these myths that are out there.”

Gabriel has been trying to do that. In the spring of 2014, he set up an advisory board of trade union leaders, environmental activists and cultural figures to help shape the German position on TTIP and discuss the negotiations. There was just one problem. None of its members were given access to any part of the deal. “They are being used as a fig leaf,” says Walter Haefeker, the head of the European beekeepers association and a vocal critic of TTIP, who says his petition to join the board was rejected.

As the public debate over the deal began to shift from confusion to hostility, Gabriel pushed for some level of parliamentary oversight in the negotiations, at least in granting the competent lawmakers the right to read a draft of the agreement and calm down their constituents. “This was a heavy debate,” he told me. In the end, it took two years of haggling before the U.S. and E.U. negotiators allowed him to create the TTIP reading room, which was opened to German lawmakers in February, behind two layers of security on the second floor of Gabriel’s ministerial headquarters in Berlin. Even in allowing that sliver of transparency, the negotiators felt the need to draft a separate document to govern the room’s existence, right down to the question of whether pens and paper could be allowed inside. That document is, of course, also confidential.

In a wry gesture of contempt for the reading room and its secrets, Greenpeace activists unveiled their own version of the room on Monday next to Berlin’s iconic Brandenburg Gate. It has glass walls to symbolize transparency and invites passersby to read through the leaked text of the agreement at their leisure, taking as many pictures of it as they like.

As for the reading room at the Economy Ministry, the only “nice gesture” it offers to German lawmakers, says Kipping, is a table in the corner with coffee and biscuits. The rest of the experience struck her as rather infuriating. “I was curious to see it, but I was also angry,” she says, “because I was not allowed to bring some of our experts and assistants with me.” That meant her only means of penetrating the document’s dense legal jargon was a German-English dictionary.

The experience did little to dispel any of the myths and conspiracies that Kipping had heard about TTIP. Though she only had two hours to process the text, she says she found nothing to substantiate the claims of Merkel and Obama that the deal would benefit small businesses. She also found nothing to contradict the claims of TTIP’s opponents that it would allow large corporations to circumvent European laws and regulations. “If you read between the lines,” she says, “it’s clear that a company with a very successful lawyer can use some of the phrases in order to get whatever they want.”

She admits, however, that her knowledge of international law was not strong enough to decipher the fine points of the deal. That would require independent experts to analyze it in detail, and the text obtained by Greenpeace may given them a chance to do just that.

But they will still have to wait a while before reading an official version of the deal, which will not be published until the negotiators agree on a final draft. “The agreement, when negotiated, will become public,” Pritzker said during the panel discussion last week. Before the deal goes to the legislatures in the U.S. and Europe for ratification, she said, “there will obviously be plenty of time for everybody to look at it and understand it.”

Asked whether that might happen this year, Gabriel answered: keine Ahnung – “No idea.” But even if the negotiators manage to finish the job before Obama leaves office in January, the wall of secrecy surrounding TTIP will have left many European lawmakers in no mood to ratify the deal. “I feel like my mouth is closed,” says Kipping. “I feel they want to make me silent.” And that doesn’t seem like an effective way to rally anyone’s support. 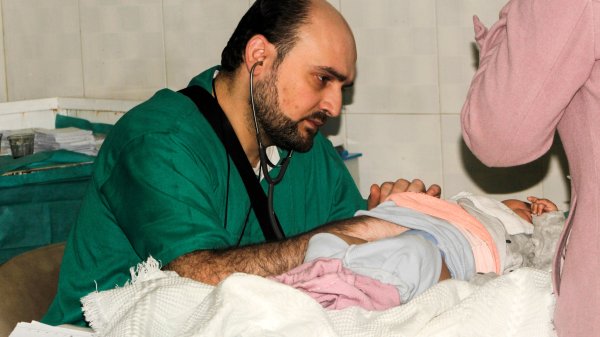 'Most Qualified Pediatrician' Killed in Airstrike on Syria Hospital
Next Up: Editor's Pick