Bob Knight’s big endorsement of Donald Trump started with a phone call–one that Knight himself initiated, reaching out to Trump several weeks ago, the legendary coach tells TIME.

Knight says he told a mutual friend in New York that he’d like to talk to Trump, who he had never met. They connected on the phone. “I just told him I thought that we needed him,” says Knight. “That right now, in this moment in time, he was the man who should be in charge. He should be the guy that can get us back to where we want to be.”

According to Knight, Trump responded: “Coach, I know exactly how I want you involved. And when the time comes, I will give you a call and we’ll go from there.”

And so early one recent morning in advance of the pivotal Indiana primary that may determine whether Trump can secure enough delegates to clinch the Republican nomination, the candidate called the coach. Many people still revere Knight in the state in which he won three national championships as coach of the Indiana University Hoosiers, despite being fired from the school in 2000 for “uncivil, defiant and unacceptable” behavior. So while Ted Cruz awkwardly called a hoop a “basketball ring” at an Indiana gym where the classic movie Hoosiers was filmed––blasphemy in the hoops-obsessed state––Trump wrangled a rock-star surrogate. They’ve appeared at campaign events together over the last few days, Knight’s white mane fixed on the cable news loop. “That son of a b-tch can play for me!” Knight said at one rally.

In an interview with TIME, Knight talked about the endorsement, why he believes Trump is the most honest candidate and whether he agrees with Trump’s proposal to build a wall along the border with Mexico.

Knight has been interested in politics since he was a history and government major at The Ohio State University in the 1960s. “Over the years, I’ve made a little hobby of studying what’s going on, where we are and what’s happening,” Knight, who’s 75 and retired from both coaching and broadcasting, tells TIME. And he says he hasn’t come across anyone else like Trump. “Who reminds you of the best home run hitter?” Knight says. “I don’t think he reminds me of anybody. He’s Donald Trump.”

They’re kindred spirits, accomplished alpha men accustomed to controversy. Knight’s thrown a chair, choked a player, and made an infamous remark about women: back in 1988, when asked by NBC news correspondent Connie Chung how he handled stress, Knight said “I think that if rape is inevitable, relax and enjoy it.” Trump has made several well-publicized degrading remarks about women, and a recent line that Hillary Clinton wouldn’t receive even 5% of the vote if she were a man, appeared to make Mary Pat Christie, the wife of New Jersey Gov. Chris Christie, visibly uncomfortable while she stood behind Trump’s podium.

Both have also made a habit of defying critics. Knight told the crowd at Indiana’s Assembly Hall before a game that “when my time on earth is gone, and my activities are passed, I want [them to] bury me upside down, and my critics can kiss my ass.”

Knight points to Trump’s business success, including developing “The Apprentice” into one of the most popular shows on TV, as a key reason for endorsing him. “You think of the things that are necessary for getting something back together and going in the right direction, you tell me who’s better to do it than he is?” Knight says. “This guy has a better background perhaps than anybody that has ever been a first-time entrant to the White House.”

Asked how he squares that explanation with the multiple bankruptcies of Trump businesses, Knight leans on a sports metaphor. “Everybody has failure,” he says. “We didn’t play very well last night, I’ve got to figure out in our next game we’ve got to play better. We had trouble with the zone defense, I’ve got to figure out a better way to approach the zone. And we’re able to do things that way. I think we were able to look at things that were wrong with the way we were playing, and then we got those things going in the right direction. All you’ve got to do is check the number of times the kids that I coached won.

“It’s the same thing with what he does. He looks at things, and everything isn’t going to go right. But he’s pretty good at looking at things and deciding what has to be done, and then getting it done. And you give me a person that’s as good as he is, that has that experience that he’s had, and has been able to get things on the right track, you find that guy, then I’ll talk to you about it.”

What about the experience of that woman, Hillary Clinton, who’s been a senator and Secretary of State? “I don’t get into all that stuff,” Knight says. “I’m just talking about the guy that I think is the best person that we have to get all that done. Let him figure on the Secretary of State. Let him do those things.”

Knight, who coached Army from 1965-1971, Indiana from 1971 to 2000, and Texas Tech from 2001-2008, has no party affiliation. And while he donated $2,000 to “Texans for Rick Perry” in 2010, $2,000 to President George W. Bush in 2003, and golfed with Vice President George Bush (and country music star Charley Pride) after Indiana won its second national title under Knight in 1981, he says he also admired Birch Bayh, the three-term Democratic senator from Indiana, and Lee Hamilton, the Democrat who represented Bloomington, home of Indiana University, from 1965 through 1999. Knight insists party matters less than the person. “What the hell is a Republican?” Knight says. “What the hell is a Democrat? I don’t care. I’ve always urged people to make sure you vote for the right guy.”

Knight says he doesn’t support every Trump campaign plank. Of the proposal to erect a wall on the U.S.-Mexico border to curb illegal immigration, Knight says “I don’t have anything to do with that.” Instead, he offers his own approach. “I think a great idea would be involving our various military services along the border all the way from San Diego to Houston. We’ve got military bases all over the country. We can just move some people down there and let those cartels who are doing a lot of hurt the youth of America, let those cartels fight against the Marine Corps.”

Knight says he’s discussed this alternative to the wall with Trump. “I think that whatever he would chose to do, however he would go about it, I think that we need to get out of the hands of young American people that crap that comes across the border,” he says.

In a speech Wednesday, Knight said there has “never been a more honest politician than Donald Trump.” Throughout the campaign, however, professional fact checkers have had a field day singling out Trump’s false statements. Politifact has posted a running tally, now at 57, of Trump’s inaccuracies: after Trump’s sweep of five primary states on Tuesday and speech on foreign policy on Wednesday, the Washington Post found Trump uttered eight falsehoods in sixteen hours. “I don’t know anything about that,” says Knight. “As I look at him, I just say that what he’s done, he’s worked hard at it. He’s worked hard to do what he has accomplished. I think that — I don’t remember if I said whether he was the most honest guy or not, I don’t think I said that.”

He did. “Well, I think that may be, I don’t know,” says Knight. “I think the guy has done a great job. I don’t think that political history is full of whole lot of tremendously honest people. I have never found any fault about that as far as Mr. Trump is concerned in my relationship with him.”

I ask Knight if he sees similarities between Trump and himself. “I don’t think that’s even important,” Knight responds. “You ask 50 people about that question, they’re all going to have a different answer. I think that doesn’t mean anything.” Does he agree with Trump’s controversial remarks about women and Mexicans? “I don’t get into that,” he says. “That’s what he does. And what he thinks he should do. That’s up to him. It’s not me to judge what he says or prejudges or whatever. It’s just, it’s a very simple thing as far as I’m concerned. And I’ve told you this about three times now. Maybe somebody else doesn’t think like I do. But you seem to want to know why I think as I do. And I’ve told you — I think at this time, and with the circumstances that face America at this time, there is no better person available, not even close, to do what he can do, what he’s capable of doing. Rather than get into all these little side things — this happened, and that happened — I’m concentrating on what I think is the most important thing, and that’s getting the U.S. on track. And he’s the guy that I think can do it. Far more so than anybody else. And my relationship with him is just that simple.” 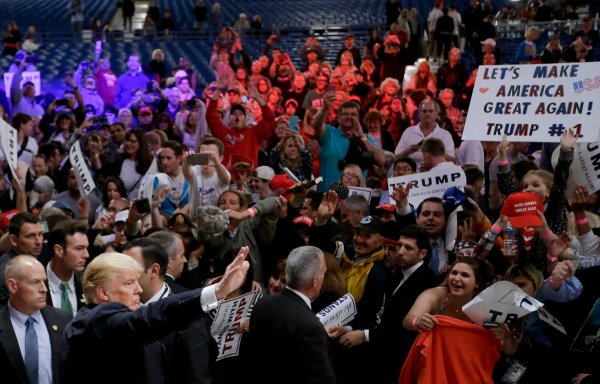