How the New Lara Croft Film Can Sidestep Her Sexist Baggage

Oscar winner Alicia Vikander will be our next Lara Croft. Let us hesitatingly celebrate.

Many women have a love-hate relationship with Lara Croft. In theory, the video game character-turned-action movie heroine is an independent badass: She’s a self-employed explorer who knows how to climb mountains, take on mystical forces and wield a gun. Think Indiana Jones, if he wasn’t afraid of snakes. And yet, the character has often been portrayed as a sex object.

If there was any time to reboot the Lara Croft films, it’s now. When Angelina Jolie played her in two early 2000s films, Croft was pretty much the only female action hero starring in her own blockbuster (save those infantilized Charlie’s Angels). Fifteen years later, we’re finally reaching an era when women can be both empowered onscreen and wear an outfit someone could actually run/climb/jump in. Jennifer Lawrence in The Hunger Games! Charlize Theron in Mad Max! Daisy Ridley in Star Wars! Now Vikander, who proved she can be both vengeful in Ex Machina and cool in Man from U.N.C.L.E, will get her turn.

But unlike those recently conceived characters, Lara Croft comes with a lot of baggage. The original animated Croft from 1996 was designed for heterosexual men—or, perhaps more accurately, hormonal teenage boys. (Just Google “Lara Croft sexy” if you don’t believe me.) Say the name Lara Croft, and the first thing that likely pops into your head are her gigantic breasts and total lack of a supportive bra. In Lara Croft 2, the animated character—which looks nothing like a human being because it was 1997—is about to get into the shower when she says flirtatiously, “Don’t you think you’ve seen enough?” Ick.

Things have gotten better over the years. In the 2013 reboot of the video game, Lara Croft’s proportions were more human than Barbie doll. Shockingly, giving Croft a more athletic physique did not send gamers fleeing. In fact, it boosted the game’s sales, with over 1 million games reportedly flying off the shelves in just 48 hours.

And yet some gamers in dark corners of the Internet have already complained that Vikander doesn’t have the right proportions for the role. Hopefully Vikander takes a cue from Gal Gadot who earlier this year said about some fans’ complaints she wasn’t curvy enough to play Wonder Woman: “If you want to be original to the story, the Amazons used to have only one breast [in order to more easily shoot a bow and arrow].”

But it’s not just Croft’s body, it’s her clothes: Poor Lara often traipses around the arctic without a jacket because a proper puffy coat would cover up her curves. Again, the new video games are better: she even got to wear cargo pants instead of shorts in the 2015 iteration. Of course, we ogle our male action heroes too, from that James Bond beach scene to a shirtless Thor. But filmmakers often imbue these men with the sort of power and intelligence female characters in action movies are rarely afforded. So please, put some clothes on Vikander when filming in the northern regions of Canada so she doesn’t get hypothermia.

And then there’s the issue of story. Lara Croft is appealing because of her power. There are many different ways for a woman to be powerful—Croft’s involves a large inheritance, insatiable curiosity and the propensity to treat dangerous adventures like a game. Angelina Jolie gave us a cocky Croft with a secret heart of gold. (But who wouldn’t have fallen for Daniel Craig with an American accent?)

In other versions, she is more vulnerable, and here’s where the game makers have historically run into trouble. In theory, it’s possible for Croft to be young, confused and still finding her power without taking away her agency (again, see Rey from Star Wars). But last year, the creators of Rise of the Tomb Raider stirred up controversy with a scene in which Croft must shoot an assailant who tries to caress her and then kill her. Many called the scene attempted rape. Here was the explanation of the moment that Crystal Dynamics Executive Producer Ron Rosenberg gave gaming site Kotaku:

While sexual assault is a reality of being a woman in today’s world, major motion pictures don’t have the best track record when it comes to portraying these types of complicated issues. I highly doubt the new Lara Croft film will tackle rape, but audience members familiar with the controversy will be looking out for this sort of thing—another land mine for the producers to avoid.

The casting of Vikander offers hope. All three of her major roles last year in U.N.C.L.E., Ex Machina and The Danish Girl initially appeared to be well-trodden tropes: the damsel, the sex slave and the supportive wife, respectively. But in all three cases, her characters turned out to be more complex. In short, the accomplished actress has risen to “it girl” status by snagging the few meatier roles for women that Hollywood has to offer. Let’s hope the new and improved Lara Croft is another one. 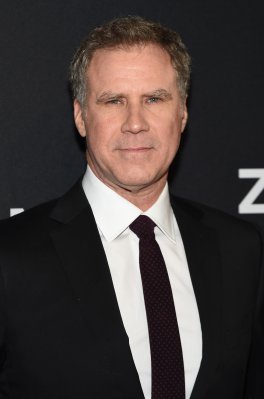 Will Ferrell Drops Out of Ronald Reagan Comedy
Next Up: Editor's Pick