The appeal of watching the NFL draft live on television, as far as there is any appeal to speak of, is the sweet, inconsequential taste of manufactured drama. Which players are rising? Which are falling? Whose dreams have come true? Whose dreams have been crushed? The actual football analysis offered on telecasts like Thursday night’s, on the other hand, tends to have limited use. After all, it’s hard to know months before training camp which college players will make much of a professional impact; there is always dissension among the draftniks and so much that is unpredictable besides.

Even so, the people who every year try to make sense of the slew of NFL prospects had before this draft reached considerable agreement on Ole Miss offensive tackle Laremy Tunsil. ESPN’s draft experts, Mel Kiper and Todd McShay, ranked him No. 1 and No. 2, respectively, among the whole field. Mike Mayock of the NFL Network ranked him third.

The six-foot-five, 310-lb. 21-year-old projected as the best at his position. He was expected to be selected within the first five or six picks. But bizarre online happenings undid that possibility and gave the evening new and unforeseen stakes.

Thirteen minutes before the 8 p.m. start time, Tunsil’s own Twitter account sent out a 30-second video of someone smoking a substance from a bong by way of a gas mask then coughing. (Tunsil would admit later in the evening that he was the man in the video.) The tweet would be quickly deleted, and Tunsil’s account with it, but the video had made its way around the web and around team front offices. And Tunsil, like so many lonely green-room prospects from prior years, began to slide.

Connected reporters suggested that the video had scared teams off; both the Baltimore Ravens and the Tennessee Titans took other offensive tackles, rated less highly than Tunsil, and the tackle-needy New York Giants passed him up for a cornerback. Tunsil’s powerful agent, Jimmy Sexton, was said to be calling teams around the league, insisting that the video depicted his client’s uncharacteristic lapse in judgment. His college coach, Hugh Freeze, defended him live on ESPN. Meanwhile the network showed Tunsil about to cry. His fall likely cost him on the order of $10 million over the life of his first contract.

Putting a seeming end to the chaos, the Miami Dolphins picked Tunsil at No. 13. But things somehow managed to get stranger from there. Tunsil’s Instagram account posted screenshots of text messages purportedly between Tunsil and an Ole Miss athletic department staffer in which Tunsil asked for rent money. Paying players — which Freeze has in the past denied doing — runs afoul of NCAA rules. When reporters asked Tunsil after he had been picked if he had taken money from his coach, he denied it at first. Then, reconsidering, he said, “I’d have to say yeah.”

Could even Taylor Branch have scripted a more cathartic evening? Tunsil’s social-media tormentor had taken a shotgun to two myths central to maintaining the college-sports cartel. Of course major college football players are not amateurs playing just for the love of the game and its — ha! — pedagogical benefits. And of course college football players smoke pot (assuming that’s what was depicted in the video); not only are they prone like any college students to such indulgences, but they are also football players, apt to self-medicate and, as author and former NFLer Nate Jackson has argued, perhaps better off doing so with marijuana than with opiates. (The NFL has a funny relationship with marijuana, banning it but testing for it only during the offseason, recognizing perhaps that its use is too widespread — or benign — to thwart.)

Yet for all the satisfaction one can derive from watching an egg land squarely on the smug visage of big-time college sports, Thursday night’s proceedings had a darker human side. Someone close to Tunsil had betrayed him on the biggest night of his life. (Tunsil’s stepfather, who had been involved in a domestic dispute with the player last June and filed a suit against him on Wednesday, has denied being that someone.) And having seen Tunsil nearly broken by the first ploy, the saboteur took a second swing during a moment of comparable vulnerability. He seemed, all things considered, to handle it fairly well. But the opportunistic smearing of Laremy Tunsil is nonetheless ugly and sad, and decidedly too consequential for this most frivolous of NFL nights. 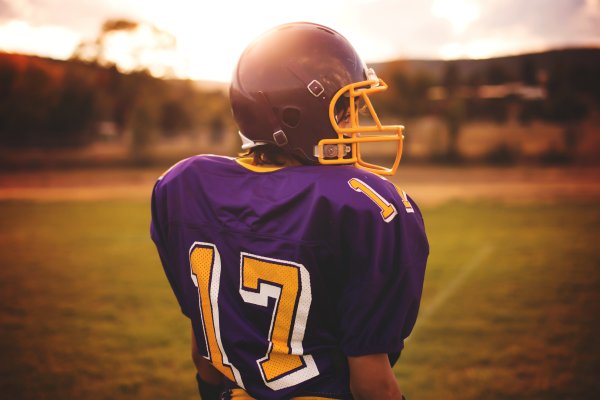 CDC to Investigate Best Age to Start Playing Football
Next Up: Editor's Pick