Carly Fiorina appeared in a new advertisement with Texas Sen. Ted Cruz shortly after she was chosen as his running mate.
By Sam Frizell

Ted Cruz and Carly Fiorina have released the first advertisement of their joint campaign to stop Donald Trump and win the Republican nomination.

The ad features Fiorina, the former CEO of Hewlett-Packard, speaking to the camera over footage her and Cruz clasping hands in victory.

“Jobs. Freedom. Security. They feel out of reach because corrupt politicians have sold us out to the insiders,” Fiorina says. “Neither Hillary Clinton or Donald Trump will fight the system, because they are the system.”

In a last-minute gambit to prevent Trump from winning the nomination, Cruz chose Fiorina on Wednesday as his vice-presidential running mate. The two have begun campaigning together in Indiana in a public move meant to draw attention from Trump. But Cruz is far behind Trump in the delegate count and mathematically eliminated from winning the nomination through state primaries (a contested convention is his only hope).

Fiorina is seen as an effective critic of former Secretary of State Hillary Clinton, and played that role aggressively before she dropped out of the running for the Republican nomination herself in February. 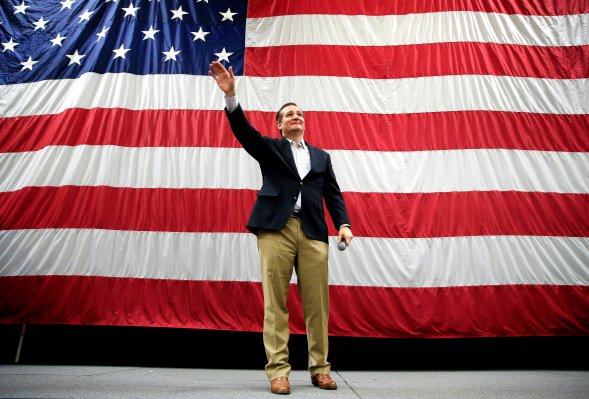 Ted Cruz Says He Doesn't Actually Have an Alliance With John Kasich
Next Up: Editor's Pick