Stop the Surge of Anti-Semitism in the U.K.

Labour Party leader Jeremy Corbyn leaves after meeting with US President Barack Obama after he spoke at the Royal Horticultural Halls in London on April 23, 2016.
Matt Cardy—Getty Images
Ideas
By Rabbi David Wolpe
Wolpe is the Max Webb Senior Rabbi of Sinai Temple in Los Angeles, the author of eight books and has been named one of the 50 most influential Jews in the world by the Jerusalem Post.

I was sitting with a small group of students in a lounge at the University of Edinburgh when he said it. In a conversation about World War II Justin, an English student, remarked: “Well, Hitler’s only mistake was removing the gentlemen of the star.” I was an anglophilic Jewish kid from Philly and had never met English anti-Semitism head on. I couldn’t believe what I was hearing.

“Do you mean, murdering millions of people?” I said. At that point my friend Eric stepped in, and said to Justin, “I’d like you to meet Rabbi Wolpe’s son, David.”

Justin had the good grace to be embarrassed. He and I had many conversations over the course of that year. He told me frankly that he revered his father, and his father hated Jews. All his father’s friends hated Jews. That was how he had grown up. He couldn’t bring himself to believe they were all wrong.

Apparently things have not changed much. The Labour party is enduring a spasm of public anti-Semitism. First MP Naz Shah posted on her Facebook page: “Solution for Israel-Palestine conflict. Relocate Israel into the United States… The transportation costs will be less than 3 years of defence spending.” Shockingly she was then defended by Labour leader Jeremy Corbyn, who said in a dizzying display of spin: “She made remarks … that she doesn’t agree with.”

The public outcry led to her suspension and to an apology. The deeper question is not her retraction but the constituents who, presumably aware of her beliefs, voted her into office in the first place.

Of course there is evidence the voters knew exactly what they were getting. Naz Shah replaced George Galloway, who openly supported Hamas and Hezbollah and called for the end of Israel. Whether anti-Semitism took a step up or down in the election is an open question.

There’s more. Into the fray steps, or rather goosesteps, the egregious former Mayor of London, Ken Livingstone. He delivered himself of this inaccurate scurrility: “Let’s remember when Hitler won his election in 1932,” he told BBC Radio London. “His policy was then that Jews should be moved to Israel. He was supporting Zionism before he went mad and ended up killing six million Jews.” Livingstone followed this up by insisting that it is “over the top” to equate racism and anti-Semitism.

Apart from the historical fact that Hitler did not “win” in 1932 (he received 33% of the vote), his policy was not repatriation of Jews to Israel, but the expulsion of Jews wherever they might go. This provisional plan was before he achieved the power to simply march people to camps and kill them. Why would a modern politician—a former Mayor of London, no less—refashion the greatest mass murderer of Jews in history as a proto-Zionist? The only possible reason to make such a statement is to antagonize the Jews whom you loath, a hatred which appears increasingly endemic in British politics.

The controversy has occasioned hand wringing and calls for self-examination. There are appeals to the special nature of the British character. All of this is taking place against the background of Britain’s debate over Brexit, the vote over leaving the E.U. The Brexit question arises from Britain’s sense of distinction from the remainder of Europe. As anti-Semitism surges throughout the continent, it appears that in this respect, there is increasingly no difference. 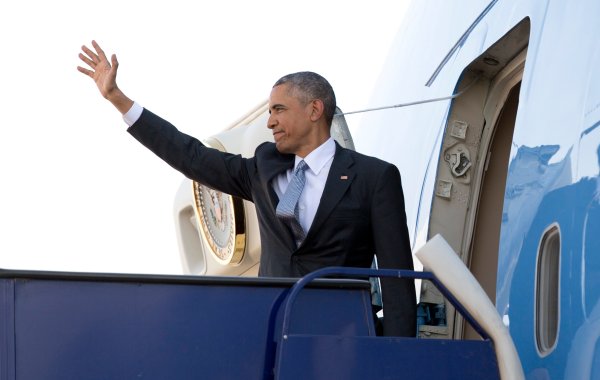 Obama Raises Hackles in Europe Debate as He Visits U.K.
Next Up: Editor's Pick