Former House Speaker John Boehner on Wednesday evening called Republican Sen. Ted Cruz “Lucifer in the flesh,” a reflection of just how much the Cruz is disliked by many of his colleagues on Capitol Hill.

In a talk at Stanford University on Wednesday evening, Boehner was asked about his views on the presidential candidates.

“Lucifer in the flesh,” the former speaker said about Cruz to laughter, according to the Stanford Daily, the university’s newspaper. “I have Democrat friends and Republican friends. I get along with almost everyone, but I have never worked with a more miserable son of a b—h in my life.”

Cruz has positioned himself as an outsider on Capitol Hill, making few friends among his colleagues, who widely distrust and dislike him. Even among those who have endorsed him, support for Cruz is often a begrudging tactic to defeat the even more feared Donald Trump.

“If you killed Ted Cruz on the floor of the Senate, and the trial was in the Senate, nobody would convict you,” South Carolina Sen. Lindsey Graham said in February. Just six of Cruz’s Senate colleagues have endorsed him for president.

The Texas senator has about 550 delegates compared with Donald Trump’s near-1000, and hopes to win the nomination at the Republican convention. On Wednesday he chose former Hewlett-Packard CEO Carly Fiorina as his running mate, a remarkable move so early in presidential contest.

Cruz fired back Thursday morning in a Tweet, using Boehner to position himself as more of a Washington outsider than Donald Trump: 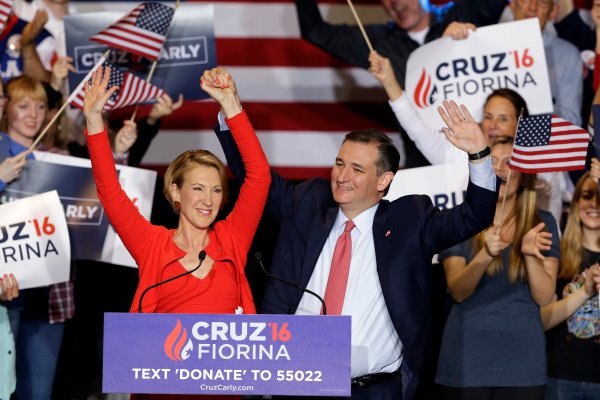 How Ted Cruz Threw a Hail Mary Pass
Next Up: Editor's Pick