The U.S.S. John C. Stennis, a Nimitz-class nuclear-powered aircraft carrier, plowed through the azure waters of the South China Sea in late April, as implacable as one of the world’s largest warships ought to be. Escorting the supercarrier, which was carrying more than 3,000 military personnel on a route some 125 nautical miles east of Malaysia, were a trio of guided-missile destroyers and an Aegis cruiser. Overhead, F-18 strike fighters, Seahawk helicopters and Hawkeye early-warning radar aircraft swooped through the sky. “We’re committed to security at sea,” said Rear Admiral Marcus Hitchcock, who commands the Stennis Strike Group. “We are very invested in the economic development and building of commerce in the region.”

The South China Sea is one of the world’s busiest shipping lanes, through which more than $5 trillion in maritime trade passes each year. But the vast waterway is also one of the planet’s most contested spaces, with competing claims from various regional governments that have led, over the decades, to fatal skirmishes and diplomatic deep freezes. China, the region’s greatest power, demarcates nearly all of the South China Sea as its own through maps marked with a U-shaped, nine-dash line that overlaps with exclusive maritime economic zones claimed by Vietnam, the Philippines, Malaysia, Taiwan, Brunei and Indonesia. (Indonesia, however, has said it is not a claimant to any of the disputed islets of the South China Sea.)

Since taking power in late 2012, China’s President Xi Jinping has asserted his nation’s South China Sea claims more vigorously, embarking on an island-building campaign that has turned mostly underwater features into patches of land large enough to host military runways. The nine-dash line itself is only around 70 years old, having been drawn by a Chinese cartographer shortly before the Communist Party won the Chinese civil war. But the Chinese government claims most of the South China Sea’s outcroppings as its historic birthright, so-called “integral” or “inherent” territory. The Philippines has sued China in the Permanent Court of Arbitration in the Hague, and a decision is expected as early as June. But China has already indicated it will not honor the international court’s ruling if it goes against Beijing. The U.S. says it takes no sides in the South China Sea dispute, even if it has bolstered defense ties with some of China’s rival claimants.

In mid-April, a Chinese military jet landed on Fiery Cross, a man-made island in the South China Sea that just a couple years ago was mostly underwater reef. Days before, China’s top uniformed military officer turned up in the Spratlys, a contested collection of islets, reefs and shoals. “In my opinion China is clearly militarizing the South China Sea,” Admiral Harry Harris Jr., commander of the U.S. Pacific Command, testified to Congress in late February, after China had stationed radar and surface-to-air missile batteries in the Paracels, another disputed scattering of reefs and rocks. “You’d have to believe in a flat earth to believe otherwise.”

For its part, Beijing accuses the U.S. of being the one that is “militarizing” the South China Sea. “The United States has repeatedly questioned China’s intentions,” said Chinese Foreign Ministry spokesperson Hua Chunying on April 22. “But will the U.S. explain its real motive in stoking tensions and increasing military presence in the area?” The John C. Stennis Strike Group’s Admiral Hitchcock dismissed this claim. After all, he says, the U.S. Navy has been plowing Asia-Pacific waters since 1853. (The same year, U.S. Commodore Matthew Perry steamed into a Japanese harbor and used gunboat diplomacy to foist international trade upon a once isolated island nation.) Since the end of World War II, East Asia has enjoyed remarkable economic growth. “We are very proud of what the U.S. Navy has done to help this region begin a very historic economic rise,” Hitchcock said, “because of the maritime security that we provide, and the reassurance we give our partners and allies.”

An air show for a group of visitors flown out to the carrier served as a potent reminder of America’s projection of power. A formation of F-18 Hornets soared. A Seahawk helicopter probed the waters for submarines. Aircraft strafed the sea with bombs, sending white spray into the tropical air. Around 100 sorties take off from the Stennis’ flight deck each day, each plane’s pilot executing a catapult takeoff and arrested landing in which the velocity decreases from 105 m.p.h. to 0 m.p.h. in two seconds. The roar of aircraft shakes the 24-story carrier every few minutes. The Stennis’ permanent mission is to “protect American interests on the waters of the world” and visitors are reminded that the 1,092-ft. carrier is “4.5 acres of sovereign U.S. territory capable of traveling to the furthest reaches of the globe.”

Although China is rapidly assembling a blue-water navy, it currently boasts only one aircraft carrier, a retrofitted Ukrainian ship that was once considered for use as a floating casino. But Beijing is constructing a second aircraft carrier, and President Xi — who last week donned camouflage fatigues and was described in Chinese state media with a new title of “Commander in Chief” of the central military commission’s joint battle command center — has been shifting military resources from a defensive army posture toward a more expeditionary naval and aerial one. China is setting up its first overseas military base in the African horn nation of Djibouti.

Before a port call in Singapore on April 19, the Stennis had participated in joint patrols with the Philippines, one of the U.S.’s treaty partners in collective defense arrangements. (The U.S. has seven treaty partners in the world; five are in the Asia-Pacific.) It was while aboard the Stennis that U.S. Secretary of Defense Ashton Carter announced earlier in April that the U.S. and the Philippines would conduct future patrols together. In recent months, the U.S. has also sailed warships within 12 nautical miles of a Chinese-controlled island and reclaimed reef, in exercises the Pentagon says are designed to underline the importance of freedom of navigation in such a vital waterway for global commerce. “This is not a challenge to sovereignty,” says Hitchcock. “These are challenges to excessive territorial claims. And we take no position on sovereignty other than to say we hope there is a peaceful and diplomatic resolution to sovereignty challenges here in this region.”

Captain Kavon Hakimzadeh, the John C. Stennis’ executive officer, says he has never seen so many Chinese vessels tracking the American ship, as when it has cruised through the South China Sea during its latest deployment. “I would say they are a continuous presence,” he says, of the Chinese People’s Liberation Army (PLA) navy vessels in these disputed waters. “They clearly want to know what we are doing and where we are going.” But Hakimzadeh also underlined that “our interactions with the Chinese navy have been totally professional.”

On land, though, practitioners of Chinese defense and diplomacy have taken a more strident tone, prompting American political rhetoric calling for further challenges to Beijing. The same day that Hakimzadeh was showing off the inner workings of the John C. Stennis — 18,600 meals served per day! 12,000 eggs at breakfast! — the Chinese Ministry of Defense assailed the fact that U.S. Air Force planes had days before crossed international airspace near the South China Sea’s Scarborough Shoal. Known as Huangyan Island in Chinese, the shoal is 120 nautical miles from the Philippines. In 2012, the Chinese seized Scarborough Shoal from the Philippines after a months-long standoff, and military analysts say that China may begin reclamation work there soon.

Tensions have bubbled up further south as well. Earlier in April, an Indonesian government vessel was towing a Chinese fishing ship that Jakarta said was illegally fishing in its territorial waters. Suddenly a Chinese coast-guard vessel, which is not bound by the same code of conduct to which the world’s navies are supposed to adhere, rammed the Chinese fishing ship to compel the Indonesians to release the towline. Jakarta officials were furious. Although Beijing says it does not question Indonesian sovereignty over nearby islands, a Chinese Foreign Ministry spokesperson said the incident had taken place in China’s “traditional fishing grounds.”

The South China Sea has long been a rich fishing ground for dozens of different Asian cultures and civilizations. The U.S. Navy has plied its waters for more than 160 years, along with a stream of container ships laden with the world’s exports and natural resources. “The ocean is a very connected environment,” says Hitchcock. “The navies that are on it are very connected, no matter what their nations are going through diplomatically.” For the Chinese government, however, the movements of the John C. Stennis and other American warships are tantamount to regional interference and military escalation. “Like the tide that comes and goes, none of these attempts will have any impact,” said Chinese Foreign Minister Wang Yi in March, as the Stennis completed an earlier pass through the South China Sea. “History will prove who is merely the guest and who is the real host.” 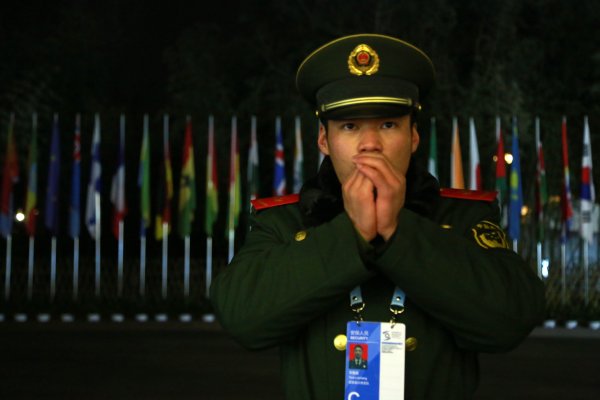 China's Press Freedom Rating Is Worst Ever
Next Up: Editor's Pick