Painkillers Found in Prince's Possession When He Died, Report Says

Prescription painkillers were allegedly found in Prince’s possession when he died in his house in Minnesota, NBC News reported Wednesday.

According to the report, officials have yet to say what role, if any, those medications may have played in his death.

The investigating county sheriff is seeking help from the Drug Enforcement Administration to determine where the medications came from and what prescriptions Prince had obtained, federal law enforcement officials told NBC News.

The legendary singer was found dead alone at his home and recording studio, Paisley Park, on April 21 at age 57. The autopsy was completed the following day and officials determined that there were “no obvious signs of trauma” and “no reason to believe at this point that this was a suicide.”

The official cause of death will likely not be released for several weeks, the Midwest Medical Examiner’s Office told The Hollywood Reporter at the time.

The Hollywood Reporter: Prince’s Estate: No Will Could Mean Chaos, Tax Bills and Lawsuits, Say Experts

There was no cell phone in “close proximity” to Prince when his body was found, Carver County Sheriff Jim Olson said during a press conference last Friday.

According to a transcript released by the Carver County Sheriff’s Office, the 911 call came in from an unidentified male at the residence who said “the person is dead here” and “the people are just distraught.”

TMZ reported last week that Prince had been using the painkiller Percocet to treat chronic hip pain since 2009, stemming from his plane having to make an emergency landing in Illinois on April 15, after which, it has been reported, he was treated and released from the emergency room.

The Hollywood Reporter: What Will Happen to Prince’s Memoir?

The Carver County Sheriff’s Office could not be reached for comment. 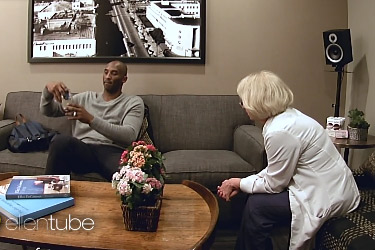 Watch Kobe Bryant Try to Sell a Woman a Jar of His Own Sweat in Hilarious Prank
Next Up: Editor's Pick