A year ago, Maryland State Senator Catherine Pugh stood on the streets of Baltimore urging residents to remain calm as the city was consumed by unrest following Freddie Gray’s death in police custody. Today, Pugh is the front-runner to become the next mayor of Baltimore.

On Tuesday, Pugh won 37% of the Democratic primary vote, beating former Mayor Sheila Dixon, who earned 34%, and Elizabeth Embry, a former Baltimore prosecutor, who came in third with 12% of the vote.

Read more: What’s Next for Baltimore

Polls going into the election showed essentially a two-person race between Pugh and Dixon. Pugh’s campaign, which centered around job creation and education reform, promised to move the city forward, while Dixon, a former mayor who effectively lowered crime during her tenure but resigned after being convicted on embezzlement charges, ran on a campaign that highlighted her past performance leading the city. The race, one of the most expensive ever run in Baltimore, came after Mayor Stephanie Rawlings-Blake announced in September she would not run for re-election after criticism over how she handled last year’s unrest.

According to election results analyzed by the Baltimore Sun, Pugh essentially tied Dixon on Election Day but garnered more of the 30,000 early ballots cast between April 14 and April 21. The Pugh campaign, however, was criticized for busing people who were applying for campaign jobs to early polling places and giving them free meals. The campaign said it would look into any improper activity.

In Tuesday’s vote, David Warnock, a Baltimore businessman, finished fourth with 8%; City Councilman Carl Stokes finished fifth with 3%; and DeRay McKesson, the Black Lives Matter activist whose late entry into the race became a source of national interest, finished sixth with just 2% of the vote.

Pugh, who has lived in Baltimore for decades, worked as both a banker and journalist before serving on the Baltimore City Council, the Maryland House of Delegates, and later the state senate, where she’s in her third term. She finished second to Mayor Rawlings-Blake in the 2011 Democratic primary. 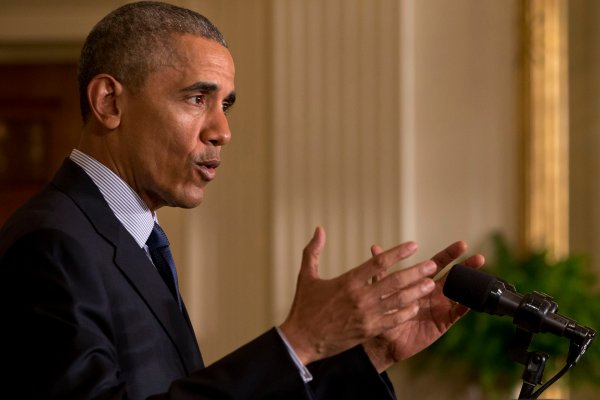 President Obama Plans to Visit Flint
Next Up: Editor's Pick