How GPS Is Messing With Our Minds

Getty Images
Ideas
By Greg Milner
Greg Milner is the author of Pinpoint.

“Your GPS is WRONG,” the sign proclaims. “This is NOT Mt. Rushmore.” It seems a quirk in Google Maps’ database is leading drivers in search of the monument to a seemingly random spot on a highway, 13 miles away. The message is clear: you can believe GPS when it says you have arrived at one of America’s most iconic destinations—or you can believe your lying eyes.

This deception is common—and we are easy marks. Since the rise of consumer turn-by-turn satellite navigation units in the mid-2000s, there has been increasing evidence that GPS is messing with our heads. Every week seems to bring another story, some combination of baffling and tragic. Around the world, drivers follow that soothing voice of GPS into harms way. They drive into oceans and rivers, off decommissioned bridges, down hiking trails that GPS insists are roads. So many of them have found themselves stranded in the wasteland of Death Valley that park rangers gave the incidents a name: “death by GPS.”

When we hear of the couple who wound up in the Italian city of Carpi, after misspelling “Capri”; or the woman who police say drove the wrong way on Interstate 35, on the advice of GPS; or the American tourist in Iceland who wanted to drive to Reykjavik, but found himself in a remote fishing village; or the truly vexing case of the woman in Belgium who blindly followed GPS all the way to Croatia, it seems clear these people turned off part of their brain after turning on the ignition.

But we judge others’ failures at our own peril. Can we really fault the Canadian couple who, while trying to reach Las Vegas, vanished into some of the most inaccessible mountain terrain in the country, because GPS directed them to a “road” that ran through it. Or the woman on her way to (chillingly) Deception Bay in Australia, who flipped her car into a creek, and barely escaped with her two small children—local residents have long known that computerized map databases misleadingly call that road a highway, but how could she?

There is mounting evidence that GPS is doing something to our minds—and maybe even our brains. Several academic studies have proven what any of us who have driven with GPS assistance already know intuitively, that GPS allows a driver to “disengage” from the environment. A useful model is the “cognitive map,” a term first used in 1948 by Edward Tolman, a UC Berkeley psychologist. He argued that experiments with rats in mazes demonstrated their ability to envision the totality of the maze, how the various parts fit together to create a whole. A growing number of researchers now agree that reliance on GPS essentially erodes our ability to build our own cognitive maps.

It may even turn out that our GPS addiction can have actual physiological consequences. In 2006, a British study made headlines by announcing that London taxi drivers, whose jobs require them to integrate a vast body of knowledge, have above-average amounts of grey matter in the region of the brain responsible for complex spatial representation. Preliminary research also suggested that the volume of grey matter decreases when these drivers retire. At least one of the neuroscientists involved in the study has speculated that prolonged GPS use could have a similar effect.

It will be a long time—if ever—before scientists are able to reach this conclusion. But a clue to this process may be sitting in your glove compartment, gathering dust. It’s probably been a long time since you unfolded that paper map. Again, we have anecdotal evidence—ask a Baby Boomer or Gen-X-er about millennials’ lack of map-reading skills, and you’ll get an earful—along with empirical data. A Japanese project in 2008 that compared three navigational methods—GPS, paper maps, and direct experience (a guide led subjects through a route and then asked them to repeat it)—found that the GPS group lagged behind the others.

On some fundamental human level, we may need maps. A German study found that people’s ability to point in the direction of landmarks was strongest when they were facing north. They were, in effect, organizing spatial relations like a paper map, which usually has north “on top.” “Physical maps help us build cognitive maps,” one of the authors concluded. So maybe the next time you’re wondering why you’re not seeing a massive granite sculpture of American presidents carved out of a mountain—or, for that matter, the mountain—where you think they should be, consult a map of the area. Chances are, you’ll find it marked.

Adapted from Pinpoint: How GPS Is Changing Technology, Culture, and Our Minds, copyright © 2016 by Greg Milner. First hardcover edition published May 3, 2016, by W.W. Norton & Company. All rights reserved. 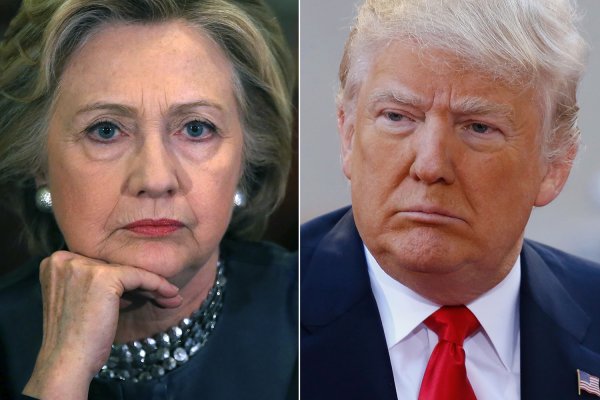 How Clinton and Trump Should Choose Their Vice Presidents
Next Up: Editor's Pick