Comcast in Talks to Buy DreamWorks Animation for $3 Billion

Jeffrey Katzenberg might have finally found a buyer for his DreamWorks Animation.

The Glendale animation company is in talks with Comcast to be sold for more than $3 billion, sources confirm to The Hollywood Reporter.

The potential acquisition would fold DWA into an entertainment conglomerate that controls key properties such as NBC, Telemundo, the USA network and Universal Studios. It also would be a strong fit for DWA, which has 19 animated television shows in production alongside blockbuster film franchises like Kung Fu Panda and Shrek.

The move would provide Katzenberg, CEO of the animation company, with a strong buyer after years of searching. In November, he held advanced talks with toymaker Hasbro about a possible tie-up after months earlier holding a round of discussions with Japanese telecommunications giant SoftBank. The mogul also has courted everyone from 20th Century Fox to various Chinese companies.

A $3 billion offer would offer a decent premium for shareholders who have invested in a company presently worth $2.3 billion.

It was not clear if Katzenberg would maintain a role in running the studio he helped to form in 1997 under parent company DreamWorks SKG, which he created five years earlier along with Steven Spielberg and David Geffen. The animation studio was spun off as a separate company in 2004, with Katzenberg at the helm.

On the flip side, by adding DWA to its fold, Universal would have two animation studios competing for coveted release slots in the crowded family-film market.

Katzenberg has steered the Glendale film studio through a number of financial challenges during the past few years as he has worked to diversify the company. He formed a joint venture in 2012 with Chinese companies to build a Shanghai-based studio, Oriental DreamWorks, which was involved in the company’s latest animated movie, Kung Fu Panda 3, which has grossed $504 million worldwide since its Jan. 29 release.

Meanwhile, DWA has been in the process of transforming its film operations after a series of box-office disappointments, including Turbo and Penguins of Madagascar, weighed on its quarterly results. DWA responded by cutting 500 jobs last year, closed an animation studio in Redwood City, Calif., and put new executives in charge of the film studio.

Katzenberg — who received $13.5 million in compensation last year — has focused on turning around the company, which will release its next movie Trolls in November in hopes of launching a new franchise. He has been attempting to duplicate the success seen in earlier hits like the Shrek series. Shrek 2, DWA’s top-grossing movie, collected $909 million worldwide when it was released in 2004.

Last year, the company reported a $53.9 million loss that was a big improvement from the $308 million deficit it registered in 2014.

However, the stock price has remained choppy during the past few years. Though it closed last year about 15 percent higher, it was still rebounding from a brutal 2014 when the stock cratered 37 percent. It closed on Tuesday down fractionally at $27.12, giving it a market value of $2.35 billion (though, factoring in debt, it is worth about $2.6 billion). 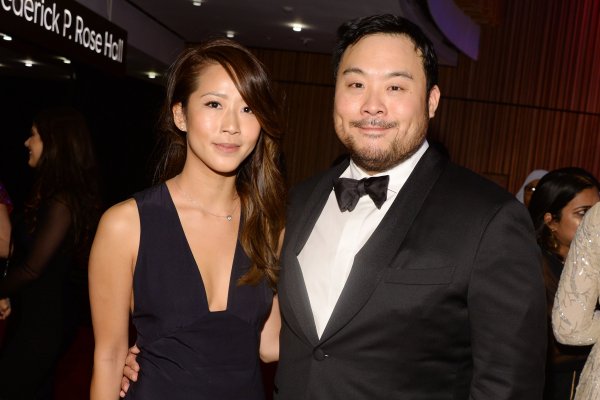 David Chang: The Restaurant Industry Needs a 'Kick in the Ass'
Next Up: Editor's Pick