The Sad Truth That Apple and Exxon Reveal About Our Economy

How the mighty have fallen.

Tuesday brought two seismic announcements in the business world. First, ExxonMobil was stripped of its AAA rating by S&P, which it held since 1949. The downgrade was thanks to a ballooning of debt, driven in part by a share buyback and dividend program that continued even as the price of oil fell. Hours later, tech giant Apple announced its first quarterly revenue loss in 13 years.

At first glance, these two stories appear unconnected, just two bits of bad news for a couple of corporate giants. But in reality, they are part of a larger trend that reflects just how disconnected stocks — and the capital markets in general – have become from corporate fundamentals and the real economy.

Let’s start with Exxon. It’s certainly not the first energy company to suffer during the recent drop in commodities prices. As I recently wrote, a number of corporations in the energy, mining and related manufacturing sectors have been downgraded in recent months. That’s largely because they issued “high-yield” debt during the boom in commodities prices in the wake of 2008, only to go bust when prices began falling precipitously. The big question was whether this “junk bond” crisis would make its way into the investment-grade market, as it so often does. (Remember the telecom bust of the 1990s, which started in junk bonds and spread out from there.)

Exxon’s downgrade shows that risk has spread more broadly. But what’s ironic is that Exxon was able to pay all of its $31 billion in capital expenses last year with cash from operations. This is not a company with nosebleed leverage ratios. What’s giving it trouble now is not just falling oil prices, but also the fact that it continued, under market pressure, to borrow money to fund dividend and share repurchases that have helped bolster its stock price.

That’s where Apple comes in. While it still has plenty of cash on hand ($233 billion), it has also issued vast amounts of debt in recent years to do exactly the same sort of share buybacks – often at the top of the market, just like Exxon. Apple’s strategy is less a reflection of confidence that its stock will rise than a desperate attempt to keep that price up when the company’s underlying growth strategy isn’t making investors bullish enough.

Apple’s disappointing sales news Tuesday underscores a deeper story. The company hasn’t introduced out any truly game-changing new technologies since Steve Jobs’ death in 2011. But in order to pacify investors who demand continued quarterly growth, the most cash-rich company in the world has borrowed billions to do these payouts. As I explained in this 2015 piece on the topic, not only does issuing debt in order to hand over cash to investors save Apple billions in taxes (it’s far cheaper to issue debt at current low interest rates than bring back cash from overseas havens and pay U.S. taxes on it), it almost always boosts Apple’s share price. Buybacks necessarily do that, as they artificially decrease the amount of shares on the market without actually changing the real value of the company via true strategic investments, like research and development, worker training, or anything else that might bolster the underlying prospects of the firm.

All of this financial wizardry underscores one of the great ironies of American business today. The country’s biggest, richest companies have more contact with investors and capital markets than ever before, yet they don’t actually need any capital. At least, not to run their daily business. The biggest economic conundrum of our age–why many companies aren’t investing their cash in things like factories, workers and wages—turns out to have an easy answer. It’s because they are using those funds to bolster markets and enrich the top quarter of the population that owns 80% of stock via capital return programs instead. A recent paper from the Roosevelt Institute shows that as borrowing to fund paybacks to investors has increased over the last few years has increased, investment into the real economy has decreased — as has growth.

This “financialization of America,” which is the topic of my own upcoming book, “Makers and Takers: The Rise of Finance and the Fall of American Business,” is at the heart of the biggest economic and political issues of our day. As both Exxon’s downgrade and Apple’s revenue decline show, when companies try to keep their share prices up with financial engineering rather than the real kind, you get an asset bubble that eventually pops. The fact that America’s capital market system has so little to do with what happens in the real economy is a key factor in our slow growth economy — and the populist politics of the day. And it’s a situation that the next administration — not to mention anyone invested in the markets, which are unlikely to show the sort of gains we’ve seen over the last several years in the near- to medium-term — will have to grapple with. I’ll be writing more on this topic in an upcoming issue of TIME. 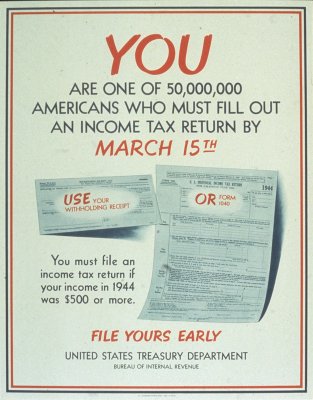 How World War II Still Determines Your Tax Bill
Next Up: Editor's Pick