After a week’s delay, South Sudan’s rebel leader Riek Machar landed in the capital, Juba, on April 26, closing fears that an eight-month-old peace deal might collapse before it had a chance to end a two-and-a-half-year-long civil war marked by gruesome atrocities and tens of thousands of dead. Machar was greeted by several dignitaries and diplomats as he stepped off the United Nations plane and set foot in Juba for the first time since December 2013. “I am here to implement peace,” he told a gathering of journalists, according to tweeted reports from local correspondent @DenisDumo. But that won’t be easy.

Machar, who was originally slated to return April 18, had been held up over negotiations of how many troops he would be able to bring with him and what kind of weapons they could carry. After a weekend of tense debate over the precise number of rocket-propelled grenades and machine guns permitted, the government finally authorized Machar’s arrival from neighboring Ethiopia. Upon landing in Juba, Machar immediately departed for the Presidential Palace, where he will be sworn in as Vice President by his arch rival President Salva Kiir.

Once allies in the battle for South Sudanese independence from Sudan, then rivals, Machar became Vice President under Kiir when the country became independent in July 2011. Two years later, Kiir dismissed Machar on unfounded suspicions that he was fomenting a coup, precipitating a brutal war for supremacy that broke down along ethnic lines—Kiir belongs to the politically dominant Dinka tribe, and Machar to the Nuers. The United Nations office on Human Rights has accused both sides of committing atrocities ranging from massacres to mass rape, forced cannibalism and the recruitment of child soldiers.

In August 2015, the United States, the African Union and several other nations forced Machar and Kiir into a peace agreement that paved the way for Machar’s eventual resumption of his former post. The cease fire was largely ineffective—fighting escalated in the months following the signing of the treaty as both sides attempted to gain ground and influence—but South Sudanese civilians fatigued by war have clung to the hope that Machar’s return will herald a return to peace and stability.

Machar’s northern strongholds have borne the worst effects of the war, especially his hometown of Leer, where government forces embarked on a literal scorched earth campaign in July, and then again in October. A recent helicopter flight above the area revealed a wasteland of burnt fields and abandoned villages pocked by the circular scars of torched mud brick huts. Farmers scared away by the fighting have fled their fields for the relative safety of UN bases or ramshackle settlements. As a result, there is no food in a fertile region that should be the breadbasket of Africa. “We are all waiting for peace,” says Taban Aldo Alex, a teacher at Leer’s Mary John Primary School.

The school, which normally hosts several hundred students, is largely empty. Students are too hungry to come to class, says the teacher. Farmers won’t farm, and children won’t go to school, until Machar returns to the capital to launch the peace process. “The problem started in Juba, and the solution will come from Juba also,” he says. “If things calm down there, [and] especially if the transitional government is formed, that goodness will flow out, up to Leer.”

Those are high expectations, but Machar’s arrival won’t be enough to solve the country’s myriad problems. The economy is in tatters, malnutrition stalks the capital, and more than two million people have been displaced from their homes in what has become one of the word’s worst—if large uncovered—human rights catastrophes. Even is peace is achieved it will be tenuous—armed supporters of both sides have yet to lay down their weapons, and remain ready to plunge back into war at the slightest provocation. Such sparks won’t be hard to find, says John Prendergast, Founding Director of the Enough Project, a U.S.-based advocacy organization committed to ending genocide. “Machar’s return cannot hide the most insidious obstacle to lasting peace, which is entrenched competitive corruption. Without an emphasis on consequences for gross corruption and atrocities, it’s unlikely the deadly patterns will be broken.”

Despite the chances of failure, Alex the teacher urges the international community not to give up on the young country. “The world has to be patient about South Sudan. We are like a child that is growing up. In 2011 we got independence, just like a child learning to walk. One two three steps, the child will fall down. So while we are still learning to walk, we will stumble and get better. But it needs time.” 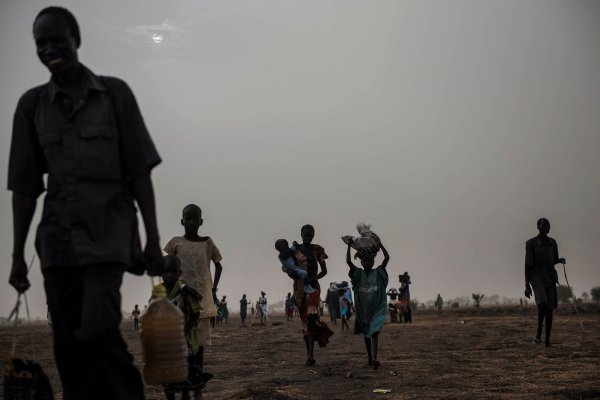