Why Apple Needs To Do Something Huge Soon

If Silicon Valley has anything resembling an action hero, it’s Apple.

Between the summer of ’83 and the summer of ’85, the company that many credit with defining personal computing as we understand it today saw its stock fall 76%. That would be a death sentence for most emerging-tech companies. But Apple – like Bond, Bauer, or Bourne – had a few tricks up its sleeve. The Super Bowl Macintosh ad that has since become an icon of iconoclasm, for one.

Sure enough, Apple had its revenge over enemies and doubters alike. The stock surged 881% in the following six years, while the Nasdaq rose a mere 69%.

Every good action hero has his or her inevitable sequel. Apple was no exception. Between 1991 and 1997, Apple lost 80% of its stock value – and this during a time when the Nasdaq Composite came close to tripling. Any Apple fanboy worth his weight in bile knows what happened next: Apple bought NeXT Software, bringing Steve Jobs back into the fold.

Then came the iPod, the iPhone, the iPad and a mere 21,000% increase in Apple’s market cap between 1997 and its peak of $134.54, reached about a year ago. It marked the end of a historic run. And since then, Apple bulls and bears alike have since been wondering: Is this the end of that great run, or just a pause before the next one starts?

The question has haunted Apple for years. Is there life after the iPhone? The iPad’s introduction in 2010, three years after the iPhone, was supposed to be a robust second act. But iPad sales are softening. Meanwhile, the Apple Watch, introduced last year, has yet to find a killer app to drive sales beyond hardcore fans and early adopters.

So where does that leave Apple? In something of a twilight zone. By no means will it tumble the way it did in the 1980s. But there’s no guarantee it will see the surges it has in the past any time soon. Apple’s stock thrives after it has released a product that appeals to the mainstream. That could be the iPhone 7, due out this fall. But it won’t be a new iPad, or an Apple Watch, or the elusive rumors of something more than the existing Apple TV, or even a new Macbook Pro. All of these will add to Apple’s ever growing revenue and profits, but only incrementally so. These are like an action hero recounting old victories: Bond re-defeating Blofeld, say, or Bauer keeping Nina out of the loop.

The analogies between Apple and action films die quickly because one exists in the realm of fantasy and the other in the very unforgiving world of investor expectations. But they also die hard (sorry) because Apple fanboys have fought so passionately for so long for the company’s over-achieving, underdog image. And because Apple in 2016 is, like any action hero worthy of a long life, in need of a new challenge.

Apple has long been an underdog in tech, largely because of its insistence on manufacturing hardware, rather than being mainly software-driven like Facebook or Google. As an underdog, it has long been subject to low valuations. Apple’s stock is valued around 11 times its earnings this year. Google’s stock is valued at twice that, and Facebook’s forward price-to-earnings ratio is nearly three times as high.

But unlike Google or Facebook, which can promise investors steady growth in both revenue and profit, Apple has a cyclical business. That is, its chief product — the iPhone — is released every two years. In the in-between years, Apple can only hope that incremental upgrades as well as sales in overseas markets like China will offset any cyclical lows.

The chart above shows how Apple’s revenue growth slowed dramatically before the iPhone 6 was released. Thanks to the iPhone 6 and 6 Plus, Apple’s revenue grew in established markets as well as emerging ones like China, a happy ending that boosted Apple’s stock to new highs. All Apple needed was the perfect sequel.

And this brings us to the financial drama that has been playing out this quarter. A fifth of Apple’s market cap has been eaten away during the past year. China’s economy is slowing. And reports have emerged in recent weeks that iPhone sales fell in the first quarter of the year. The question is, just how far did they fall?

And more importantly, what is Apple going to do for its next act of growth? It’s not the Apple Watch, which has proven to be a triumph of design over everyday utility. It’s probably not the iPhone, which, with every release, seems less revolutionary and more iterative. And it’s not something radical like a car, which remains years away, if we’ll see it at all.

Apple CEO Tim Cook has hinted there are new products coming. If Apple’s earnings disappoint today, the sooner those new devices come, the better. Nobody begrudges an aging action hero a few gray hairs. It’s when you run out of tricks up your sleeve that the audience turns away.

Right now, Apple’s stock is trading around $105 a share, not far from where it was four year ago. Now is as good a time as any to do something heroic. 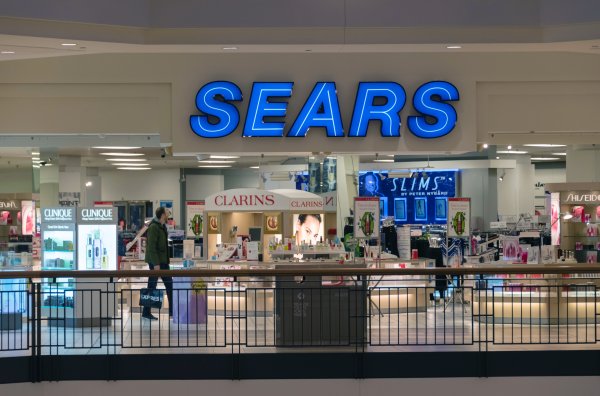 78 Sears and Kmart Locations Will Close Soon
Next Up: Editor's Pick