Burmese dissident Buddhist monk Gambira at a monastery in Rangoon on Feb. 19, 2012
Soe Than Win—AFP/Getty Images
By Simon Lewis

Since the country’s first properly civilian government in decades was sworn in late last month, the gates of Burma’s once notorious network of prisons have witnessed scenes of jubilation. The new government is full of former political prisoners — in contrast to its predecessor, which was dominated by former and serving soldiers. It has pardoned and released scores of activists who had fallen foul of the previous military-dominated government’s restrictions on expression.

But a court ruling Tuesday could temper the mood of optimism in the Southeast Asian nation, formally known as Myanmar, as it means at least one outspoken campaigner remains behind bars — for now at least. Observers in the central city of Mandalay said Gambira, also known as Nyi Nyi Lwin — a former Buddhist monk who came to prominence as a leader of mass demonstrations against the military government in 2007 — was sentenced to six months in prison, with hard labor, on an immigration charge that human-rights groups said was “trumped up.”

David Mathieson, a senior researcher on Burma, at Human Rights Watch, tells TIME the sentence was “quite harsh,” although he held out hope that a presidential pardon for Gambira would be forthcoming. “If not, it seriously weakens the government’s pledge to end the cycle of politically motivated arrests and detention,” Mathieson says by email.

Gambira was detained on Jan. 19, after he returned to the country hoping to apply for a passport. According to Amnesty International, Gambira entered Burma at an official crossing on the country’s border with Thailand, but was arrested in the northern city of Mandalay, where immigration charges were leveled against him. He was denied bail and has been in custody for the past three months. “The Immigration (Emergency Provisions) Act has been used in the past to charge individuals in politically motivated cases,” Amnesty said in an appeal last week for the unconditional release of Gambira, who the group deems a prisoner of conscience.

Campaigners have raised concerns about the activist’s detention, highlighting that he continues to suffer from physical- and mental-health issues related to his previous incarceration.

Gambira, the then head of the All-Burma Monks Alliance — a coalition of monk groups that organized the antigovernment demonstrations of 2007 — was detained, allegedly tortured and ultimately sentenced to 68 years in prison with hard labor for his role in the uprising. In what was termed the Saffron Revolution, robed Buddhist monks took to the streets in the belief that their revered position in Burmese society would provide cover for a long-oppressed public to demonstrate their opposition to the military regime that had ruled since a 1962 coup. Security forces opened fire on the monks and peaceful protesters, killing more than 20 people, and hundreds were arrested.

In 2012, Gambira was released in a prisoner amnesty that came as the country began its transition from military rule. But he was forced to leave the monkhood when no monastery would accept him. He was then rearrested for his continuing political activity and eventually fled to Thailand before returning in January this year.

Aung San Suu Kyi’s National League for Democracy won a resounding victory in elections in November, and took control of the government at the end of March pledging to make good on a promise to free all political prisoners. The Assistance Association for Political Prisoners (Burma) reckons that at least 80 activists have been pardoned this month by the new President Htin Kyaw — who was selected for the role by Suu Kyi. Charges have also been dropped against dozens of student activists who were facing trial.

Burma’s military retains key powers under the country’s 2008 constitution, however, raising questions over how much control civilian leaders will have over the apparatus of state. The police, for example, fall under the remit of the Minister of Interior, who is selected by the military’s commander in chief.

Laura Haigh, Amnesty’s researcher on Burma, says the pardoning of political prisoners had to be followed up with legal reforms to stop more activists being detained.

“Of course, these releases are just a first step, and should be swiftly followed by the reform of Myanmar’s repressive laws which for too long have been used to stifle free speech and lock up peaceful protesters,” Haigh tells TIME. “As long as these laws are on the books, human-rights defenders in Myanmar will remain at risk of arrest and imprisonment.” 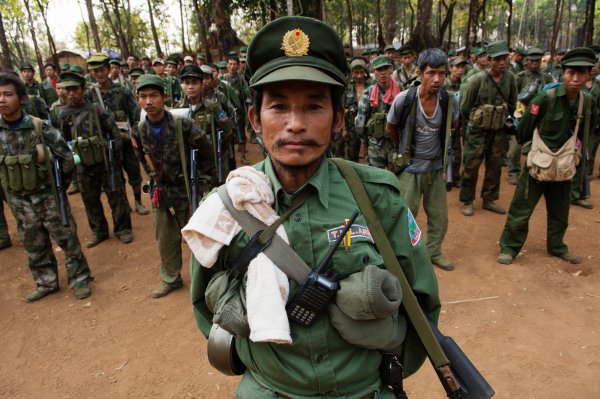 Burma’s Transition Hasn’t Stopped the Abuses of Its Ethnic Wars
Next Up: Editor's Pick