Judaism Is a 3,000-Year-Old Love Affair With a Land

Covered in prayer shawls, ultra-Orthodox Jewish men read from a Thora scroll during the Jewish holiday of Passover in front of the Western Wall, the holiest site where Jews can pray, in Jerusalem's Old City on April 24, 2016.
Ariel Schalit—AP
Ideas
By Rabbi David Wolpe
Wolpe is the Max Webb Senior Rabbi of Sinai Temple in Los Angeles, the author of eight books and has been named one of the 50 most influential Jews in the world by the Jerusalem Post.

On Passover, Jews all over the world change one sentence in their daily prayers; instead of praying for rain, we begin to pray for dew. For in Israel the time for the grain harvest has begun, and if the winds blow and the rains fall, the grain cannot be harvested and will will rot in the field. Dew on the other hand, will moisten the grain without damaging it. That simple change in the prayer marks a profound truth about Judaism that touches on modern politics as well.

Twenty-five years ago I was returning from a two-day trip to New York. I ran into my teacher, the late Rabbi Henry Fisher. We began talking, and he asked me if I had changed my watch to accommodate New York time. “No,” I said, “I kept it on Los Angeles time.” “Why?” he asked? “Because,” I answered, “I would soon be home.”

Rabbi Fisher then told me that that is why Jews all over the world prayed for rain or dew when it was needed in Israel, no matter where they lived. The assumption of Jewish history is they would soon be back in Jerusalem. They kept their clocks to the time at home.

It has also been a tradition for many centuries in Judaism to leave a corner of one’s house unpainted, to remind us that this is a temporary dwelling. We are here only until we are gathered back to Israel.

Such practices remind us that politics should not obscure a deep truth about Judaism—it is a 3,000-year-old love affair with a land. Nobel Prize winning writer Shai Agnon expressed this idea with his usual wit. Elie Wiesel writes: “Shai Agnon had a marvelous word in Stockholm when he received the Nobel Prize. He said, ‘Majesty, like all Jews I was born in Jerusalem, but then the Romans came and moved my cradle to Buczacz.’” Agnon recalls the destruction of the Temple 2,000 years ago as scattering all Jews from their birthplace, the place to which he returned in his lifetime to become a storyteller for his people and the world.

The Western wall may be the least aesthetic of all the world’s great shrines. But Jews coax the mute wall to words by placing notes in its cracks and crevices, filling up the yearning of the ages, reminding themselves that this is the heartland of their history. Throughout unparalleled wanderings, it was always to this spot that they hoped to return.

The realization of a dream, like the landing of a plane, reintroduces the friction of hard surfaces, of forces pushing against each other. The Jewish return to Zion and the revival of Hebrew as a spoken language is an astonishment of history, but it has also been fraught and painful. Yet anyone who questions the Jewish attachment to Israel ignores an ancient, enduring passion. For generations, Jews in every corner of the globe prayed for the land they had never seen, that many would never see. But they believed their children or their children’s children might one day walk its streets and harvest its crops, for they remembered the prophecy of Amos: “For I shall plant you in your land, and you shall no more be plucked up (9:15).” Israel is home. 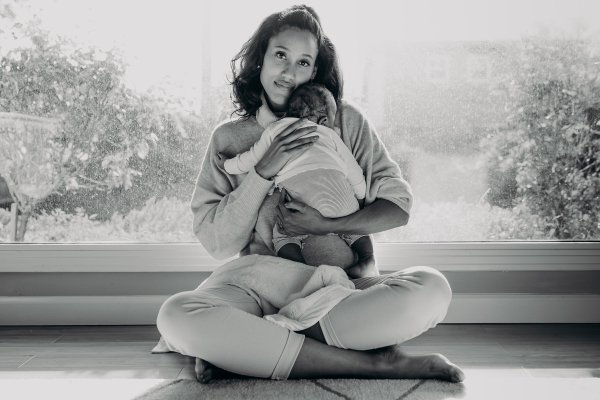 The Problem With Celebrating the Selflessness of Mothers
Next Up: Editor's Pick