Donald Trump seemed clearly rankled Monday by the decision of rivals Ted Cruz and John Kasich to team up against him, spending much of the beginning of his rally in Rhode Island bashing his opponents rather than promoting himself.

Texas Sen. Cruz and Ohio Gov. Kasich announced Sunday that they would campaign tactically in Oregon, New Mexico and Indiana to try to prevent Trump from winning the Republican nomination outright. The businessman referred to the union as “collusion,” and said at the rowdy Warwick rally, “It shows such total weakness and it’s pathetic.”

Trump had seemed to be toning down the bombast recently, appearing on his best behavior at a rally in Delaware on Friday. But that mellower Trump was nowhere to be seen in Rhode Island, advancing both a new nickname and a new personal line of attack against Kasich. Calling him “1 for 41,” in reference to the fact that Kasich has only won the Ohio primary, Trump also mocked and imitated Kasich’s style of eating.

“I have never seen a human being eat in such a disgusting fashion,” Trump said in reference to Kasich’s tour of diners and eateries. Trump said he’s trying to teach his son Barron to eat politely with small bites, so told the 10-year-old to turn away from the television when Kasich was broadcast eating.

Later in the rally, Trump compared Kasich to a beggar asking for money and said he will “collapse like a rock” as soon as negative ads are run against him.

Trump also reserved some choice insults for Cruz. He belittled Cruz for “[getting] like no votes in New York,” and hit him on the proposed Trans-Pacific Partnership, saying of his rival, “He is bad for this country, and he is bad for jobs and business.”

Trump left Rhode Island after the rally to head to Pennsylvania, continuing his final pitch to voters in the so-called “Acela corridor” before they head to the polls Tuesday.

Kasich’s team shot back at Trump after the rally, continuing the food fight by tweeting a reference to his hard-to-find brand of steaks: 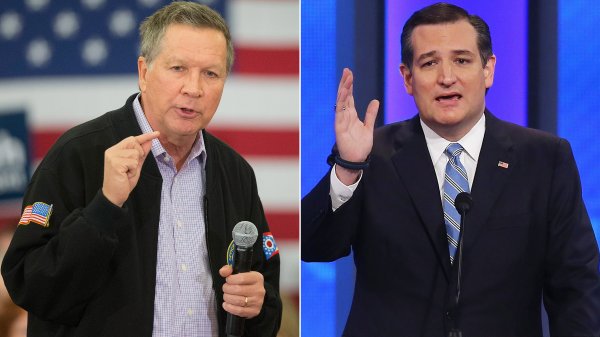 Cruz and Kasich Unite to Block Trump
Next Up: Editor's Pick