Chinese President Xi Jinping waves as he reviews the army, at the beginning of the military parade marking the 70th anniversary of the end of World War Two, in Beijing, China, September 3, 2015.
Damir Sagolj —REUTERS
By Charlie Campbell / Beijing

Li Jiangong and his wife Ding Cuimei stood in front of the bulldozer in a last-ditch protest. A government-backed firm had ordered the demolition of the small church they ran in Zhumadian, in eastern China’s Henan province, on April 14. In the end, the workmen simply ran over the couple, burying them in a deep pit. Li somehow managed to dig himself out, according to the religious-advocacy group China Aid, but Ding suffocated in the dark earth.

“Bulldozing and burying alive Ding Cuimei, a peaceful and devout Christian woman, was a cruel, murderous act,” said China Aid president Bob Fu in a statement. “This case is a serious violation of the rights to life, religious freedom and rule of law.”

Two workmen have apparently been detained in connection with the incident, though no names or charges have so far been released. While Ding’s death is an extreme example, it is clear that there is a widespread attack on religious institutions in China. More than 1,700 churches have had their crosses torn down in the country’s east, according to activists, and many have been completely demolished. Muslims in China’s far-western state of Xinjiang have been hit with bans on beards, veils as well as fasting during the holy month of Ramadan. Religious sects like the Falun Gong have long complained of persecution.

On Saturday, President Xi Jinping indicated there would be no easing of this crackdown, telling a Beijing conference on religion that China must be vigilant against what are seen as pernicious foreign religious influences. “We must resolutely guard against overseas infiltrations via religious means and prevent ideological infringement by extremists,” he said, according to the official Xinhua News Agency.

The constitution of officially atheist China promises “freedom of religious belief.” In practice, that freedom is severely curtailed: there are only five accepted creeds in China — Buddhist, Taoist, Muslim, Catholic, Protestant — and even then must operate under the control and scrutiny of the Chinese Communist Party (CCP). The Chinese Catholic church doesn’t officially recognize the authority of the Pope, for instance, and you will not find any overt reference to the Tibet’s exiled spiritual leader the Dalai Lama — decried by Beijing as a dangerous separatist — in Buddhist temples. Besides the influence of foreign patriarchs, Beijing is also worried about ISIS-inspired attacks by Uighur separatists in Xinjiang, to the democratic values espoused by American pastors, and the self-immolation of Tibetan monks.

And yet Beijing is unable to stifle interest in religion, which emerged following the economic liberalization initiated by Deng Xiaoping in 1978. Much like the Protestant bourgeoisie of Reformation Europe, or the evangelicals of American boomtowns, increasingly affluent Chinese turned to spirituality to complement their newfound wealth and education. Today, house churches are packed across China’s eastern cities, and there are reportedly 100 million Christians nationwide. Sociologists cite the breakdown of traditional family units — given that a large proportion of the population consists of only children, and of migrants who have come from rural areas to the cities to find work — as being behind a yearning for religious ties to replace the dissolved bonds of kinship and village.

Yang Fenggang, an expert on religion at Purdue University in Indiana, predicts that at current rates China could be home to the world’s largest number of Christians by 2030 — with 247 million believers. Considering the CCP currently has only 88 million members, it is easy to see why the party top brass might be wary. Certainly, Xi thought it was necessary to emphasize in his weekend speech that CCP cadres must act as “unyielding Marxist atheists … and bear in mind the party’s tenets.” Deploying an oddly religious phrase, he also told them to “consolidate their faith.”

According to William Nee, China researcher for Amnesty International, obligatory Marxist atheism has been conspicuously absent from party decrees over the past two or three decades. No longer. “It’s not a change per se, but it’s significant when that message is being reinforced by the highest levels,” Nee says.

Essentially, the government wants to ensure any religion in China is sinicized and complements the CCP. Last year, for example, the CCP even insisted that the party would chose who the next reincarnation of the Dalai Lama would be. “They want to find a merger between these religious faiths and ‘Chinese civilization,’” says Nee. “And for religious believers to unite with the party.”

If the alternative is burial by bulldozer, many might be inclined to comply. 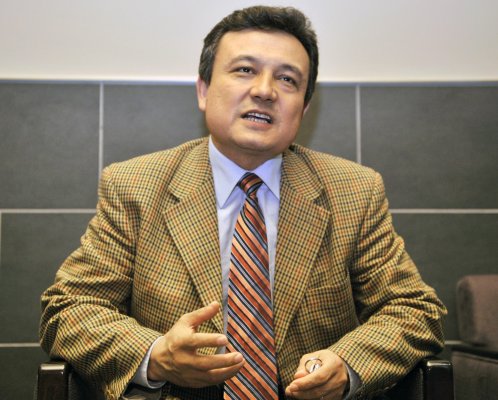