Beyoncé's Lemonade on HBO: A Familiar Message, But a Crystal-Clear Future

In her new visual album Lemonade, available now on Tidal and presented Saturday night on HBO, Beyoncé returned to ideas she’s been working through since the early days of her solo career. To wit: On her second solo album, 2006’s B’Day, the singer declared: “I know she was attractive / But I was here first / Been riding with you for six years / Why did I deserve / To be treated this way by you?” And on the HBO special, Beyoncé devoted an hour’s worth of attention to themes of adultery. “Are you cheating on me?” she asks, opening a church door, and a river’s worth of water follows.

That 2006 song, “Resentment,” is but a song, one that can be pulled up on Spotify (or Tidal!) whenever its listener is feeling kind of low. The 2016 song, presented at first as a component part of an hourlong visual spectacle directed in a grandly cinematic manner, is not lyrically more sophisticated. But no matter: Beyoncé’s ambition has come so far in the past decade.

Lemonade revealed only a little compellingly new about Beyoncé’s perspective on the world, but a great deal about her future. Devoted fans and casual listeners alike know that her music lies at the place where the power of the independent woman runs up against the desire for conventional romance. Given an hour of heavily-promoted airtime on TV and capitalizing on the vast appetite of her fans for new material, Beyoncé made similar points, but—thanks to first-class visuals and extensive voice-over—on a titanic scale.

The storyline of Lemonade follows a character’s gradual journey from repulsion to forgiveness after a betrayal by her partner. That journey felt, in the viewing, at times too gradual; the thread was occasionally muddled, never more so than when Beyoncé’s real-life husband, the rapper Jay Z, appeared and was serenaded by Beyoncé, only to give way to his wife going solo and singing a couple more songs of empowerment. The message Beyoncé sought to send felt at once crystal-clear (she has enough power to make Jay Z show up for the taping of a song about Beyoncé’s own feelings of disenchantment with love) and occluded (how bad could things be, after all, if he didn’t only show up to the taping but was seen, charmingly, chasing daughter Blue Ivy Carter around during the closing credits?). The depiction of young, slain black men like Trayvon Martin and Michael Brown, towards the special’s end, jarred like a loose tooth; it didn’t sit well, and perhaps wasn’t meant to.

Ambition is a tricky thing for pop singers, especially nowadays. It’s easiest to charm and disarm without the heaviness of potentially alienating big ideas. Lemonade, with its say-no-to-nothing visual and aural aesthetic (was that Serena Williams grinding? Was that just a country song?) pushed past taste even as its core lyrical message was simple. It courted the fate of doomed projects of the past like, for instance, Lady Gaga’s Artpop or Madonna’s American Life, albums that placed ideas over the conventional sound or the demands of the marketplace.

But the thing is, Beyoncé is at a level where she defines what the marketplace is. She’s buoyed by the sheer brio of an individual who knows that she cannot fail—and though particular components of Lemonade fell short for this viewer, its unabashed confidence carry it so far past the finish line that few other pop-world contemporaries are in sight.

Yes, this is a Beyoncé who’s (still!) singing about the heartbreak of an unnamed man cheating on her. It’s also a Beyoncé gleefully cursing out the other woman, saying in voiceover that she wants to wear “her skin over mine, her hair over mine, her hands as gloves, her teeth as confetti.” As the saying goes, your fave could never—because which other woman in the pop world would present graphic physical threats and an intimate song to her husband in the same hour?

It’s hard to imagine Beyoncé coming back down to the quotidian earth of classic album releases when her chosen medium, the visual album, provides her not just endless hype (which is not nothing) but expansive space to unfold an imagination that places intriguing frills on classic ideas. “If we’re going to heal,” Beyoncé intones at one point towards the hour’s end, “let it be glorious. One thousand girls, raise their arms.” It’s hard not to imagine many more arms than that rising across America. Who cares if a message is familiar when it’s presented so artfully—and so directly? 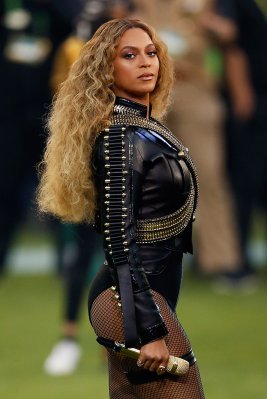