Chernobyl at 30: How Attempts to Contain the Radiation Failed

In the months following the April 26, 1986 explosions at the Chernobyl nuclear power plant, daily life changed sharply for people in Ukraine and Belarus. Parents kept their children indoors for fear of radioactive isotopes in airborne dust. City dwellers faced their tap water with anxiety, while nervously eyeing fresh spring greens and berries in the farmers’ markets. Records I have discovered in the Ministry of Industrial Agriculture archives in Ukraine show that in the wake of the nuclear disaster Soviet officials were faced with new kinds of biological and technical dilemmas, the likes of which no one in the world had ever before encountered.

The health effects of the Chernobyl disaster are greatly disputed. The International Atomic Energy Agency places the number of fatalities at 44 deaths of emergency workers after the accident. Green Peace estimates that up to 900,000 people will die or have died as a result of Chernobyl exposures. There has been no large-scale epidemiological study of the medical effects of the Chernobyl accident, but taking a look at the impact of the accident on agriculture shows just how difficult it was to keep radiation out of harms reach.

A week after the accident, Soviet officials announced that they were evacuating a 30-km. zone around the plant. Farmers on state-owned collective farms populated most of this area. In Ukraine, as truckers came in to evacuate rural families, they also loaded 50,000 head of cows, sheep and goats onto flatbed trucks. Most of these animals had remained outdoors after the accident, grazing on contaminated grass under clouds of radioactive gases. Half of the animals were too contaminated to keep, and 25,000 were sent immediately to slaughterhouses.

Soviet enterprise managers hated to waste valuable animal products. They wrote instructions that the contaminated meat be graded by levels of radioactivity. Then workers were to thoroughly wash the medium- to low-range meat and mix it with clean meat in sausages to send to shops all over the vast USSR. The only place they could not deliver the contaminated sausages, the regulations made clear, were stores in Moscow, where the men who had written the new, post-accident regulations lived.

Officials stipulated that meat that was found to be highly contaminated be placed in cold storage with the hope that in time the radioactive isotopes would decay and the meat could be safely consumed. As the frozen flesh stacked up in the slaughterhouses of small Belarusian and Ukrainian cities, it quickly overwhelmed local cold storage capacities.

Inundated, workers at the Gomel meat factory in Belarus loaded 600 tons of the ‘hot’ flesh into four refrigerated train cars and sent the cars rolling south to the Caucuses. There, radiation monitors waved dosimeters over the freight cars and quickly rejected the load. Town after town refused to receive the radioactive goods. For the next four years, the homeless train cars rolled around the western edge of the USSR, leaving a trail of radioactive exposure. Finally in 1990, KGB officers took charge of the freight, burying the meat where it came from, inside the zone of alienation.

Contaminated sheep presented another set of problems. Before the sheep were sacrificed, they were shorn. The Ministry of Industrial Agriculture originally recommended treating the radioactive wool as workers would any wool. Employees of the Chernigov wool factory, 50 miles from the Chernobyl plant, unloaded the raw wool, sorted it by hand, washed it and baled it. As they worked, dust rose and hovered over the factory floor. Most employees were women. By late summer of 1986, they started to feel strange—often nauseous, with scratchy throats, and unusually fatigued.

In the fall, monitors took measurements at the wool factory and found that the level of radiation of the dust was more than double the already high permissible norms that had been established during the emergency. They checked the wool. Wool is sticky, and holds fast to dust and particles. Monitors found that wool from contaminated animals pulsed with radiation, decaying at rates up to 156 micro Sieverts an hour. That means in a month and a half at work, employees received the maximum allowable annual dose for nuclear workers in the U.S. today. After this finding, officials drew up manuals with complicated instructions to sort the wool by levels of radioactivity and wash the medium and low-level radioactive wool for long periods to cleanse away radioactive dust. The extra washing worked. About 85% of the radioactivity drained away in the process.

The officials in agriculture considered the regulations a success. Instead of throwing away radioactive wool, they had saved it for Soviet consumers, who were in dire need of consumer products. But one inspector was asking questions. What about the danger to workers who had to treat the radiating wool by hand? And how should they handle contaminated equipment and waste water after processing? Those questions were left unanswered, at least in the correspondence I saw in the archives.

A few years later, however, the wool factory appeared again in the document trail. In 1990, a medical official wrote a letter requesting that over two hundred mostly women workers of the wool factory receive certification as “liquidators.” That was the Soviet term for citizens who worked at the disaster site and did their best to contained the smoldering reactor by trying to douse it with water, smother it with sand and lead, burrow under it to release trapped water in danger of exploding, and finally by capping the reactor in a crypt of cement. Many liquidators grew ill after 1986 and, if granted official status as people who performed dangerous jobs, they were able to obtain special medical care and compensation. The medical official testified that workers at the wool factory had received doses as high as emergency workers who had worked directly at the accident site. The wool workers were combatants in an undeclared war to save the drowning Soviet economy, a conflict that they lost in 1991 when the USSR fell apart.

These glimpses from the Chernobyl story underline how “liquidation” of a nuclear emergency is an aspirational term. No one can “liquidate” or eradicate radioactive isotopes. They can just shunt them from one track to another to wait while the radioactive isotopes take their own time to decay.

Kate Brown is Professor of History at UMBC and the author of several award-winning books, including Plutopia: Nuclear Families in Atomic Cities and the Great Soviet and American Plutonium Disasters (Oxford 2013). Brown’s most recent book is Dispatches from Dystopia: History of Places Not Yet Forgotten.

Research for this article was funded in part by the American Council of Learned Societies. 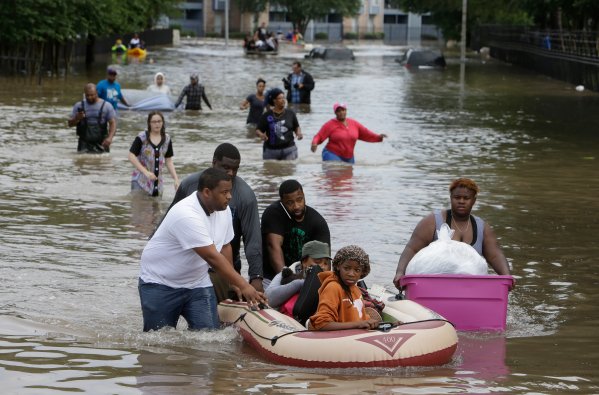 5 Dead in 'Unprecedented' Houston Floods
Next Up: Editor's Pick