Villagers rebuilding houses on April 7, 2016, in Barpak, in Gorkha district, Nepal, at the epicenter of the 2015 earthquakes, which were the worst natural disaster to befall Nepal in more than eight decades
James Nachtwey for TIME
By Nikhil Kumar / Sindhupalchok

It was a year ago that Ram Giri’s home imploded. The earthquakes that killed nearly 9,000 people in Nepal in April and May 2015 twisted the brick walls of the two-room structure, spilling the exterior into what had been the family’s living space. Here is a brick-filled cavity where there was once a roof, now temporarily covered with corrugated tin sheets, and the small annex that housed the family’s livestock been reduced to a dusty pile of rubble. To keep what’s left stable, Giri spent his savings on wooden trusses to hold up the walls. “It can collapse at any moment,” he says, gazing over his village in the country’s Sindhupalchok district, still strewn with debris from the 7.8- and 7.3-magnitude quakes. All around him, desperate villagers remain stuck in shaky tarpaulin tents and small tin sheds that seem barely strong enough to withstand the monsoon rainstorms due this summer, let alone another temblor in this earthquake-prone nation. Yet nearly a year after the first devastating 7.8-magnitude earthquake, which stuck on April 25, 2015, there is no sign of any rebuilding.

The picture is the same across swaths of Sindhupalchok — the hardest-hit of Nepal’s 75 districts — and beyond. The quakes and a succession of powerful aftershocks destroyed more than 90% of Sindhupalchok’s homes. Across Nepal, nearly 650,000 families were displaced, forced to abandon their homes and communities for tented relief camps. Up north, furious landslides left remote alpine villages like Barpak, which sat at the epicenter of the April quake, all but cut off from the rest of Nepal, accessible only by helicopter. Countrywide more than 600,000 homes were damaged beyond repair, as pent-up energy from the collision of two subterranean slabs of rock known as the Indian and Eurasian plates rippled out across one of the world’s poorest countries. The quake was so powerful it actually moved Mount Everest by more than an inch. It was the worst natural disaster to befall Nepal in more than eight decades.

All told, the economic impact was estimated at around $7 billion. The good news was that international donors stepped up to aid Nepal, where the per capita income before the catastrophic disasters was already lower than in poverty-stricken African nations such as Burkina Faso and Sierra Leone. At a June conference in Kathmandu, they promised $4.1 billion to help the country get back on its feet. “The response and the level of commitment was higher than anybody had predicted,” says Renaud Meyer, the country director in Nepal for the U.N. Development Programme (UNDP).

But the money earmarked for rebuilding homes has yet to reach victims like Giri, many of whom have only received around $150 in compensation since the earthquake. With reconstruction work at a virtual standstill and scores stuck in tents, numerous earthquake victims were reported to have perished during the country’s freezing Himalayan winter. “Everything was a on good track [until the donor’s conference]. And then it went wrong,” says Meyer, as the rebuilding initiative was overtaken by a protracted battle over a new Constitution that had been in the works ever since Nepal’s monarchy was abolished in 2008. “This was a moment to focus on rebuilding the country, but the priorities were all wrong,” says C.K. Lal, a prominent Kathmandu-based political commentator. “Instead, we were consumed by a political fight.” For the reconstruction process, the result was paralysis as political dysfunction in Kathmandu turned attention away from the rubble-strewn countryside.

Squeezed into a mountainous crevice between China on the north and India on the south, east and west, Nepal has long been the site of fractious and bloody political battles. The fall of the monarchy was preceded, in 2006, by the end of a violent, decadelong insurgency by Maoist rebels that claimed more than 10,000 lives. A new constituent assembly formally abolished the Kingdom of Nepal in 2008 and set out to write a constitution for the infant Federal Democratic Republic of Nepal. Its failure led to a second constituent assembly, which was meant to have completed its work by January 2015. But Nepal’s leaders yet again failed to agree on such basic matters as new state boundaries and the nature of the new electoral system. It was the twin disasters in April and May 2015 that finally brought the country’s main political forces together—an agreement to fast-track the constitutional process.

The stated aim was to clear the way for the rebuilding process. In fact, the exact opposite happened, as the hurry to approve the new document ended up stoking old political fault lines. A violent confrontation ensued that saw more than 50 people killed in protests beginning in August, as ethnic groups living along the country’s border with India complained that their interests had been sidelined in a new constitution that was officially approved in September. Known as Madhesis and with close language and cultural ties with India, these communities have long felt marginalized by the Nepalese state in favor of the more dominant ethnic groups drawn from areas around the political and economic hub of Kathmandu. “Negotiating the demands of different groups required more time. It couldn’t be done in a few months when the country had been destroyed by a natural disaster,” says Lal.

For a nation already deeply wounded by the quakes, the unrest couldn’t come at a worse time. The border regions at the heart of the protests form a trade lifeline for landlocked Nepal, with India accounting for more than half of the country’s trade. Even when Nepal is doing well, the country’s larger South Asian neighbor is a critical source of food and fuel. With unrest flaring around key crossings, tankers and trucks carrying badly needed supplies were left stranded on the Indian side. Fuel was rationed and hospitals began to run low on essential medical supplies. NGOs based in Kathmandu suddenly found themselves unable to distribute aid to the earthquake-affected regions. “We had to reduce our footprint significantly,” says Meyer.

Nepal blamed India for imposing an “unofficial blockade” and colluding with the protesters. New Delhi denied the charge, blaming Nepal’s internal divisions. Amid the political bickering — the border was gummed up for 135 days until the constitution was finally amended earlier this year — the rebuilding effort was derailed at the worst possible time. “It is politics, not rebuilding, that has dominated over the past year,” says Prashant Jha, a New Delhi–based Nepalese journalist and author of Battles of the New Republic, a contemporary history of Nepal.

The fallout is clear to see in the troubled record of Nepal’s National Reconstruction Authority (NRA), the state agency charged with leading the rebuilding effort. It was in June last year, around the time of the donors’ conference, that Nepal’s government said it would set up the NRA to manage and spend the $4.1 billion pledged by international donors. The then government led by Prime Minister Sushil Koirala named a chief executive for the new body. But a bill giving the NRA the legal authority to carry out its work was blocked amid wrangling between the government and the opposition over its leadership. It wasn’t until December, following the formation of a new government headed by Prime Minister Khagda Prasad Oli, that the NRA was finally given legal backing. A new chief executive was named, but it took until mid-March for the first rebuilding funds to be distributed to quake-hit victims in a section of the country’s Dholaka district. “It has taken a long time for us to establish the NRA and get the leadership [in place],” says Rajan Bhattarai, a ruling party lawmaker and close aide of Oli. “But now the institution is in place, the system is in place, and this will move forward.”

But much more remains to be done, including hiring staff at the NRA itself. “You go to the office of the NRA and it’s still very much empty. You look at their staffing tables and [positions are] either ‘under recruitment’ or ‘to be filled,’” says Meyer, the UNDP director. “There’s a lot of gaps still in the system.” The Prime Minister acknowledged the challenge on March 29, when he told a meeting with officials from earthquake-affected districts that “the reconstruction work is not going to end even in decades at this pace,” according to the Kathmandu Post newspaper. “We will reach a place where the reconstruction would be futile. Because everything will be gone by the time we finish our work. People will die.”

Even as the reconstruction process drags, confusion reigns about how it will actually work. “It is not clear what kinds of houses people are allowed to rebuild,” says Min Bahadur Shahi, the convener of the Humanitarian Accountability Monitoring Initiative, a collective of local NGOs. “For example, even if I’m a private individual and I have the money to start rebuilding my home, the government doesn’t allow me to reconstruct my house because they say they will announce new building codes. But there is no clear information on these codes.” The result, says Shahi, is that even those victims who can afford to start rebuilding their homes are left in limbo as they wait for clearer information from the NRA.

As tens of thousands of earthquake victims prepare to endure a second monsoon season living in temporary shelters, the country also faces the risk of fresh political turmoil. While the border unrest eased after Nepal’s main political parties amended the constitution in January, the changes do not fully address the Madhesi demands for a more equitable settlement, leaving open the door to further strife, according to analysts at the International Crisis Group. In a new report in early April, they warned that the country risked further violence, as Madhesi groups remain dissatisfied with the constitutional changes. There is also the continued threat of natural disasters, with the country experiencing a series of smaller tremors since last year’s earthquakes, most recently on April 9, when a 4.5-magnitude rupture jolted Nepal.

In Sindhupalchok, the prospect of renewed political turmoil fills Giri with dread. Before the earthquake, he earned close to $200 a month as a van and truck driver for a local businessman. His wife worked part-time at a nearby farm. But the quake put a stop to that — landslides and the movement of earth across Sindhupalchok destroyed water pipes and corked natural springs along the hillside, severely restricting the supply of water for drinking and farming. Giri lost his own job when the border protests blocked the supply of fuel to Nepal. “There was no diesel for months,” he says. “What use is a driver without any diesel?”

Though supplies from the Indian side have resumed, fuel remains scarce. Giri says he is now lucky if he drives more than one or two days a week. He spends the rest of the month hiring himself out as a casual laborer. “It’s mostly removing rubble leftover from last year,” he says. “At the end of the month, we now have $30, maybe $40, for a family of four. Our home has been destroyed. Who knows when the government will rebuild it. They say they will give us money to rebuild it. When? Next year?” 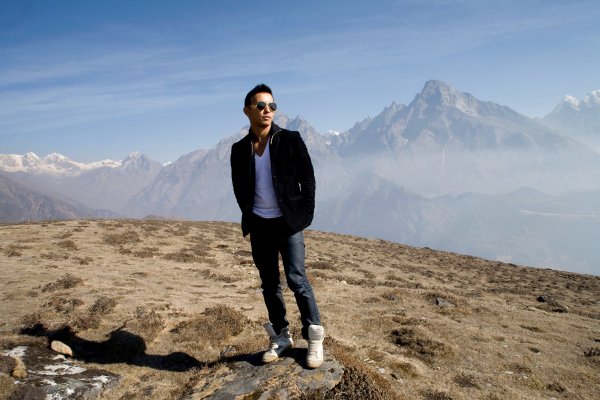 How to Build a Stronger Nepal
Next Up: Editor's Pick