President Obama said laws that have been passed in North Carolina and Mississippi targeting the LGBT community are “wrong and should be overturned” in a Friday joint press conference with the British Prime Minister David Cameron in London.

The president said U.K. travelers would be welcome in both states despite the laws, an assurance that follows a travel advisory from the U.K. Foreign Minister’s office issued in response to the two measures. “You should come and enjoy yourself,” President Obama said. “I think you would be treated with extraordinary hospitality.”

But he added, “I also think that the laws that have been passed there are wrong and should be overturned.”

The president blamed a combination of politics and emotions for the laws that many see as discriminatory against gays, lesbians, and trans people. Mississippi’s bill would go into effect in July and would allow organizations to deny service to LGBT people based on objections to same sex marriage. North Carolina’s bill mandates that transgender people use the bathroom that accords with their birth sex.

“Although I respect their different viewpoints, I think it’s very important not to send signals that anybody is treated differently,” Obama said. “But, if you guys come to North Carolina and Mississippi, everyone will be treated well.” 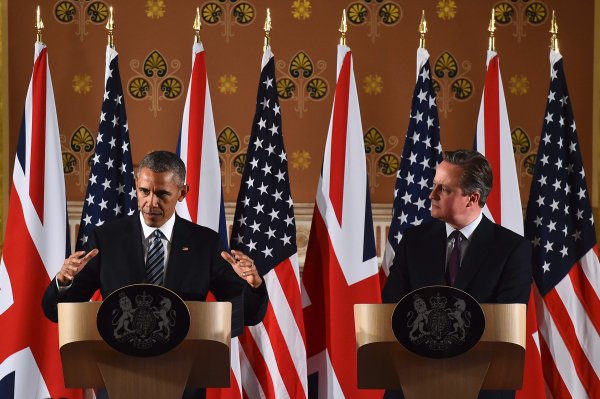 Obama Explains Why He Removed Churchill Bust from Oval Office
Next Up: Editor's Pick