Heads of state and high level diplomats from more than 170 countries signed the Paris Agreement at the United Nations Friday, a key step toward implementing the world’s most significant agreement to address global warming.

The strong show of support on Earth Day from countries representing 93% of global greenhouse gas emissions furthered hopes that the agreement will take effect later this year. No prior global agreement has received some many signatories on the first day.

“Today is a day to mark and celebrate the hard work done by so many to win the battle of securing the Paris Agreement,” Secretary of State John Kerry Kerry said at a speech at the U.N. Friday. “But knowing what we know, this is also a day to recommit ourselves to actually win this war.”

At least 55 countries representing 55% of the world’s greenhouse gas emissions must ratify—not just sign—the agreement for it to be implemented. The ratification process, which is subject to the internal politics and procedures of each country, has held up past agreements including the notorious Kyoto Protocol.

Supporters of them Paris Agreement say that ratification should not be a problem this time around. The document—agreed to in December—was crafted carefully to ensure countries could ratify the document without complicated political fights. Some elements like reporting requirements are binding while others like which specific measures countries should take are non-binding. The agreement aims to keep temperatures from rising more than 2°C (3.6°F) by 2100.

The language in the agreement is particularly helpful for the United States, where a Senate battle could have stalled implementation for years. Kerry said Friday the U.S. would ratify the document by the end of this year, suggesting that the White House would not submit the document for Senate approval. China also committed on Friday to ratifying the agreement before a G-20 summit in September. The U.S. and China together account for 40% of global greenhouse gas emissions.

Many climate experts say they expect formal entry to force to come before the end of the year but after this year’s gathering of climate diplomats in Morocco in early November. 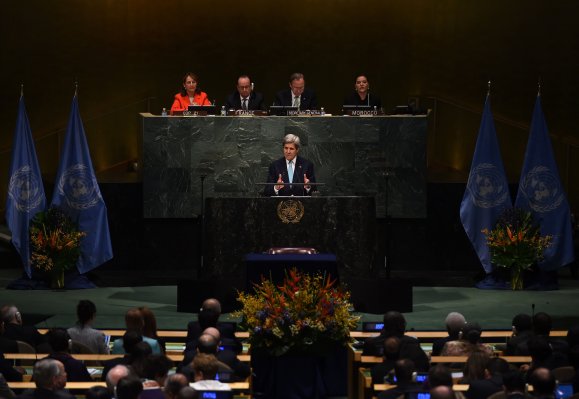