Cloaked in jet-black hoods and wearing green bibs scrawled with marker pen, 77 alleged members of a telecoms-scam ring arrived in Beijing earlier this month after their forced deportation from Kenya. But less than half of the group were mainland Chinese; 45 held Taiwanese passports, and their deportation to the mainland incensed officials in Taipei, who denounced the move as a serious infringement of Taiwanese sovereignty. China may regard Taiwan as a renegade province, but Taiwan sees itself as a sovereign nation.

On Friday, Chen Shiqu, a deputy inspector with China’s Public Security Ministry’s criminal-inspection bureau, told state media that all the Taiwanese had “admitted their guilt” under questioning. “They will thus be investigated, prosecuted and tried in accordance with mainland law,” he added.

Commentators have leaped on the affair as a challenge to cross-strait relations for Taiwan’s President-elect Tsai Ing-wen, leader of the Beijing-skeptic Democratic Progressive Party (DPP), who takes office May 20. Outgoing President Ma Ying-jeou, of the Kuomintang (KMT or Nationalist Party), spent his two terms attempting to build closer ties with Beijing in the hope that a cozy relationship with the world’s second largest economy would boost Taiwan’s own, which hasn’t been performing. This failed, and the landslide win for the DPP in January’s general elections was deemed a clear indictment of his policy and the assertion of a distinct Taiwanese identity.

Many in Taiwan, wary of China’s historic claim over the island despite the its effective split from the mainland in 1949, and Beijing’s loathing of the DPP, saw the repatriation of their citizens to China as a sinister provocation. Taiwan’s parliament released a joint statement, endorsed by all party caucuses, denouncing the “forced deportation” that “seriously infringed upon the basic human rights and the nation’s sovereignty.”

However, the real situation is more nuanced. Way before President Ma’s attempts to chummy up to Beijing, the greatest cooperation between these two longtime foes had been in organized crime, with gangsters operating cross-strait syndicates — in drugs, gambling, protection and prostitution — virtually since the end of China’s civil war. Triad gangs in semiautonomous or autonomous Chinese-speaking territories such as Hong Kong, Macau and Taiwan are unerring backers of the Chinese Communist Party (CCP).

Taiwanese gangsters frequently flee to China when the heat is on. One of the most notorious is Chang An-lo, the Bamboo Union gang boss better known by his nom de guerre the White Wolf, who spent seven years living freely in Shenzhen despite being wanted on organized-crime charges in Taiwan. He was arrested upon his voluntary return to Taipei in 2013 and remains on police bail. (He has also formed his own pro-Beijing political party.)

More recently, Taiwanese criminals operating in China have become a real headache for the mainland authorities. China’s Public Security Ministry says some $1.5 billion is lost annually to scammers posing as police, government officials, banks or insurance firms, and conning ordinary Chinese out of large sums of money. The alleged criminals apprehended in Kenya are alone accused of $93 million worth of fraud. But when crime rings, which typically operate in third countries to evade law enforcement, are broken up, Taiwan’s legal penalties are weak — not least because no crime occurred on Taiwanese soil or targeted Taiwan’s citizens.

As the respected Taiwan-based political blogger Michael Turton adroitly points out, when Taiwan managed to pressure Malaysia to deport a separate group of suspected scammers to Taipei — much to China’s fury — they were immediately released because of “lack of evidence.” Even a senior lawmaker for the KMT admitted, “We have to face reality as well; we had given light sentences to the fraudsters after they were extradited back to Taiwan, which had resulted in certain consequences.”

According to Liao Da-chi, professor of political science at Taiwan’s National Sun Yat-sen University, the Beijing authorities are likely making political capital out of essentially a law-and-order issue. Existing law-enforcement cooperation agreements between Taipei and Beijing are based upon the 1992 Consensus that there is “one China,” even if both sides disagree over which of them is the legitimate China.

However, Tsai’s DPP has refused to acknowledge the 1992 Consensus, opening the possibility of a formal break from the mainland — a prospect Beijing vows would result in a military response. Through the Kenyan deportation, Beijing is hoping to bring Taiwan to the negotiation table. The hope is that Taipei would try to utilize these same law-enforcement agreements to get its citizens back, and that in turn could be interpreted as a tacit ratification of the 1992 Consensus, making any potential rollback by Tsai more difficult.

“China is trying to send a warning to Tsai Ing-wen,” says Liao. “But this is also about law enforcement — the two are connected. Beijing is trying to use every possibility to influence Tsai Ing-wen.”

Certainly, China has not been coy about detaining persons of interest outside its borders, from abducting U.K. and Swedish passport-holding publishers in Hong Kong, to arranging the deportation of 109 Uighur Muslims from Thailand.

In the Taiwan case, China’s heavy-handedness appears to have worked. A high-level delegation went from Taiwan’s Mainland Affairs Council to Beijing this week to negotiate for the return of the 45 deported nationals. On Thursday, 18 of the 20 Taiwan nationals deported from Malaysia to Taiwan and initially freed were rearrested. The remaining two were barred from leaving Taiwan.

Beijing’s message appears to be for Taiwan to get its house in order and clamp down on criminal gangs, or else Beijing will take matters into its own hands. And given that conviction rates on the mainland hover at around 99.9%, Taiwan would be doing its citizens a disservice not to listen.

Also tellingly, public opinion in Taiwan is turning against this being a sovereignty issue, and support for the detained group is draining. For Taiwanese, increasingly burdened by stagnant wages, the soaring cost of living and high youth unemployment, the suspected criminals deserve little sympathy. “People are angry that Taiwan has a reputation as a hub for criminal gangs,” says Liao. “They feel ashamed and are asking why we are trying to help these criminals.” 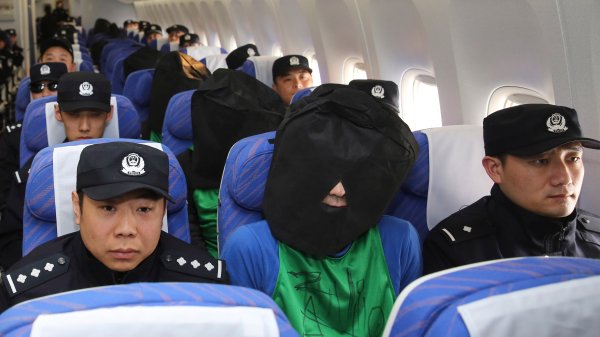 China Irate Over Deportation of Fraud Suspects to Taiwan
Next Up: Editor's Pick