Ecuadorean City Faces Total Rebuild After Quake: 'It Will Never Be the Same'

A resident rides his bicycle past collapsed homes in Pedernales, after an earthquake struck off Ecuador's Pacific coast, April 20, 2016.
Henry Romero—Reuters
By Ezra Kaplan / Pedernales

Search-and-rescue operations in Pedernales, Ecuador, have shifted into simply search and recovery, three days after a historic 7.8-magnitude earthquake left the city in ruins. Workers are now looking for bodies rather than survivors.

Much of the population of this coastal city has fled, while heavy machinery has moved in to clear the rubble. Those who remain wander the streets with faces covered by white face-masks to protect themselves from the thick dust that hangs in the air. The nearly empty streets are permeated by the stench of rotten meat coming from collapsed supermarkets and crushed fridges.

Along the roads leading north from the city, squatter camps have popped up. Families who lost nearly everything gather together under hastily hung tarps with all their remaining belongings piled neatly in one corner and a simple mattress or two providing a place to rest. Good Samaritans from cities across Ecuador occasionally pull up in pickup trucks and unload donations of clothing, food, water and mattresses. Those who can afford to leave have already gone.

“We have a population in panic. There has been an exodus from the city as people have completely abandoned their homes,” Pedernales Mayor Gabriel Alcivar tells TIME. “Here in Pedernales we are not accustomed to such big earthquakes. We’re used to small tremors, but this earthquake has changed the city beyond recognition. We simply aren’t prepared to deal with this.”

More than 500 people died as a result of Saturday’s earthquake that struck the Pacific coast of Ecuador. Search-and-rescue teams have only been able to clear a fraction of the destruction, and officials expect that the death toll will continue to rise. In the 47,000-person city of Pedernales, nearly every multistory building has been marked with orange spray paint designating it for demolition. President Rafael Correa said Thursday the costs of rebuilding could be as much as $3 billion. Meanwhile, aftershocks continue to hit the region, some as strong as 6.8 on the Richter scale, days after the initial tremor.

Aid has come from well outside Ecuador. The U.N. organized an airlift from Copenhagen. Doctors Without Borders dispatched two teams with plans to deploy aid to the most affected remote areas. Search-and-rescue teams have arrived from Argentina and Chile. Volunteer aid organizations from the U.S., like One Flag Disaster Response, have people on the ground assessing the needs with teams ready to deploy at a moment’s notice.

Locally, nearly every Ecuadorean government organization is represented in the Pedernales response headquarters located in the city’s central soccer stadium, from the military to the treasury. Police and firefighters who were bused in within hours of the earthquake have begun to rotate out, replaced with fresh personnel.

“The situation here is desperate. There are many people without shelter. There is still no food available,” said a coordinator for the UNHCR response team. “Unfortunately I think this is a large-scale disaster. I think it will be years before they can rebuild what they have lost.”

Outside the city’s crumbling main church, now unsafe to enter, a few pews have been placed on the sidewalk next to a shattered statue of Jesus. A woman sat sobbing there Thursday after finding out her loved one was killed in a building collapse, surrounded by aid workers and community members comforting her in a surreal, nearly biblical scene.

“The city has been completely destroyed, and the truth is we just don’t know what is going to happen,” said local resident Isabel Rosada as she stood outside a tarp attached to two sticks and a retaining wall. Nearby, family members cooked a simple meal on a bottled gas powered camping stove. “I doubt if Pedernales will ever get back to what it was. It will never be the same.”

As the sound of generators and construction equipment filled the air, some local residents tried to find brief respite from the devastation. Though the normally popular beach is nearly deserted and lined with disaster-response vehicles, a small group of community members waded into the Pacific waters to enjoy a few rare moments of peace. As long as they faced out toward the horizon, they could ignore the cracked and disfigured buildings that now constitute this once ocean-side oasis. 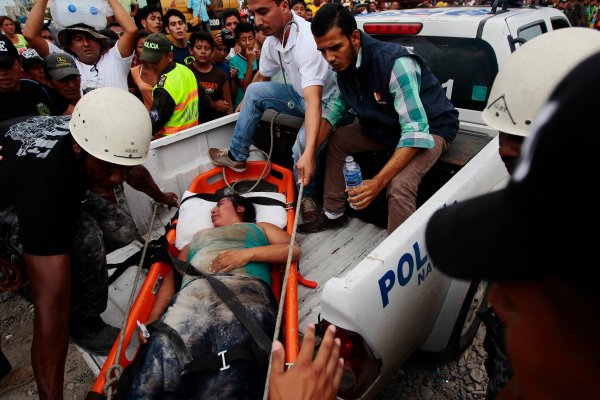