Paris Agreement Signing Comes at Critical Juncture for the Planet

World leaders hailed the passage of the Paris Agreement last December as a transformational moment in decades-long struggle to curb global warming. For the first time, all the world’s major emitters had agreed to specific emissions reductions goals to address climate change and a rough framework on how to get there.

But as heads of state and high-level diplomats gathered at the United Nations on Friday and signed the document, the next step in the long bureaucratic process that could allow the deal to take effect later this year, scientists and policymakers say the agreement leaves many questions unanswered. Chief among them: how will the world actually reduce greenhouse gas emissions enough to meet the agreement’s goal of keeping global temperature rise below 2°C (3.6°F) by 2100? The date the agreement enters into force will determine how soon the mechanisms of international diplomacy begin churning to ensure enforcement elements of the agreement like transparent reporting of emissions.

This is just the beginning, though. Many countries only submitted detailed plans in the Paris Agreement to decarbonize their energy infrastructure through the 2020s, no further, and even those commitments on their own aren’t sufficient to put the globe on a trajectory to prevent 2°C of warming. In fact, the globe would warm by approximately 2.7°C by 2100 if countries only follow through on their current commitments, according to a study from Climate Action Tracker.

The lack of a clearly defined long-term path isn’t an accident, however. The agreement requires countries to assess their progress every five years and—hopefully—strengthen their commitments. The first so-called stocktake will likely take place in 2018, with countries submitting new commitments by 2020. Some climate experts have argued that the time period will allow countries to consider how new and rapidly advancing technologies like carbon capture could change their plans. But in the world of energy—where a power plants contracted today will remain in use for decades—many others say policymakers do not have five years or more to wait.

“You set goals, you should at least do a spreadsheet for what it might look like to get there,” says Jeffery Sachs, director of Columbia University’s Earth Institute, who has called for planning out to 2050. “We’re going to have to invent the idea of a 40-year energy strategy in country after country.”

The Paris Agreement follows more than two decades of largely failed efforts to galvanize the international community to address climate change—decades in which emissions kept rising and the globe kept warming. Study after study has suggested that unchecked greenhouse gas emissions will bring catastrophic and irreversible levels of warming by the end of the end of the century. Research published this year showed that sea levels rose faster this past century than any of the 27 previous centuries, while ice melt from Antarctica led to more than 3.5 ft. (1.1 m) in global sea-level rise by 2100.

Read More: See How Much Nicer Climate Change Has Made Your Weather—And Why That’s a Problem

The academic research has been reflected in today’s weather, particularly in recent months. Last year was the hottest on record by a large margin. This year is expected to be even hotter, potentially bringing the globe close to the 2°C (3.6°F) warming red line, even as El Niño—a semi-regular climate phenomenon that amplifies global temperatures—fades in the coming months. Temperatures in February were the most-above average of any month on record, with global temperatures an astonishing 1.2°C (2.2°F) higher than the 20th century average for that month. In some areas in the Arctic, February temperatures jumped up to 16°C (29°F) above average driving dangerously low levels of sea ice.

The worrying warming news has only increased the resolve of climate experts and diplomats, who are pushing a slew of initiatives in the coming months in advance of the next UN climate summit in Morocco this fall. Most importantly, climate diplomats say they hope countries will signal their commitment to increasingly ambitious greenhouse gas emissions reduction measures. Efforts like new methane emissions standards in the U.S. and Canada, the approval of a series of large-scale solar facilities in India and a five-year plan in China with aggressive suitability targets have all come after Paris

“Paris really set a precedent on the temperature goals,” says Liz Gallagher, senior associate at climate think tank E3G. “And in order to do that we’re going to need really early action and ambition.”

The Paris Agreement provides momentum, they say, but many of the most significant efforts will need to take place outside of its formal framework. Cities, states and regional governments, for instance, have begun long-term planning to reduce emissions—and to adapt to the warming that is on its way. Corporations have taken steps to reduce carbon in their supply chain. None of those are formally accounted for in most assessments of the Paris agreement commitments (though some are trying).

The signing of the Paris Agreement represents a significant step on the path to addressing climate change, but even when it fully takes effect, likely later this year, climate experts say much will remain uncertain. But the only path forward is stronger efforts.

“What we face is two competing realities,” says Mike Brune, executive director of the Sierra Club. “Pessimism and optimism are both fully justified. No matter what, the next decades will be worse than they already are.” 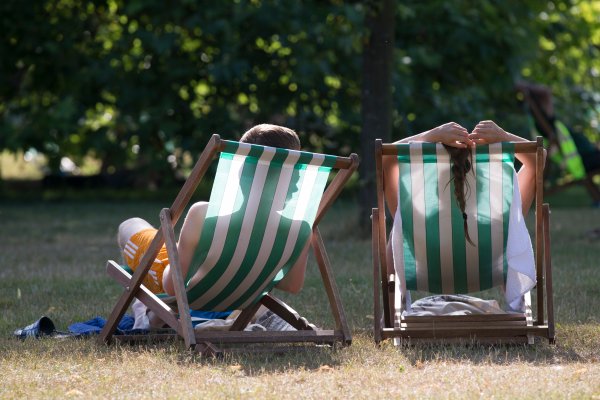 How Nice Weather May Be Undermining Action on Climate Change
Next Up: Editor's Pick