Refugees Are Running Out of Time

A man burns a pair of trousers to make it a bonfire during a foggy morning at a makeshift camp at the Greek-Macedonian border near the Greek village of Idomeni where thousands of refugees and migrants are stranded on March 8, 2016.
Dimitar Dilkoff—AFP/Getty Images
Ideas
By Margaret Huang
Margaret Huang is the executive director for Amnesty International USA.

These are the questions that refugees asked Amnesty International researchers, who were recently in Greece investigating the living conditions for refugees in the country after the complete closure of the Macedonian border in March. The border closure is the result of the disastrous deal struck between the E.U. and Turkey, which has left 46,000 people trapped in shocking conditions. Without decisive action and without help from other countries, the situation for refugees in Greece and throughout Europe will continue to decline. Put simply: Refugees are running out of time.

A Syrian woman camped at Idomeni, Greece, and featured in Amnesty’s new report, Trapped in Greece: An Avoidable Refugee Crisis, told our researchers that she and others are sleeping on the ground, blankets soaked with water, and that she and the other refugees and migrants there live without proper bathrooms. The woman, who is nine months pregnant and was traveling with her husband to Germany to meet family members, told us that disease is beginning to spread in the makeshift camp. She said that the reason she had taken this perilous journey was to settle her children in a safe environment. Her story is emblematic of why so many refugees have taken desperate measures to protect their families.

The U.S. has nothing to gain and much to lose by turning its back on this woman and her fellow refugees.

We must ensure that the countries neighboring Syria do not continue to bear the disproportionate burden in addressing immediate needs. These border countries are housing millions of Syrian refugees while countries further from the epicenter of the refugee crisis continue to fail to provide enough aid or resettlement positions.

All refugees have a right to seek and enjoy asylum. And all countries, especially the U.S. and other wealthy countries, should do everything in their power to help people fleeing conflict and persecution. That includes resettling the most vulnerable and robustly funding agencies and programs working to alleviate the refugee crisis worldwide. The America I believe in protects people from horrific human-rights abuses and makes sure refugees are safe and supported—no matter their nationality, race or religion.

President Barack Obama should increase the number of refugees the U.S. accepts annually and push Congress to provide the appropriations necessary to ensure that resettled refugees—and refugees globally—have the support they need.

The president has committed to resettle 10,000 Syrian refugees in the U.S. by October, and that is commendable. But for the millions of refugees at risk, the reality is that these numbers are far from enough. More than 12 million Syrians—more than half the population—are currently displaced, and there are currently more than 4.8 million registered Syrian refugees who have fled government bombs and attacks by ISIS and crossed borders to seek safety. Only a fraction—1%—of the global refugee population is even considered for candidacy for resettlement in the U.S.

We are in the largest refugee crisis since World War II. As of June 2015, according to the UN High Commissioner for Refugees, armed conflict and persecution had forced a record 60 million people to flee their homes in search of safety, and one in every 122 people on earth was either a refugee, internally displaced or seeking asylum.

Shamefully, here in the U.S., many public officials are resorting to scaremongering and xenophobic attacks to discourage Syrian refugees from seeking or being granted asylum in the U.S. This kind of rhetoric against refugees—particularly Islamaphobic rhetoric—inflames hate and violence at home and abroad.

The fact is that many of these refugees are fleeing violence, and the U.S. vetting process is already lengthy, extremely detailed and very safe. Refugees are subject to the highest level of security checks of any category of traveler to the U.S. and will not be admitted until all security screenings have been successfully completed.

Not only is taking on more refugees the right thing to do, it’s what many in the U.S. want. Many Americans are following the refugee crisis closely and, according a Pew poll from last September, a strong majority of young people strongly favored raising the cap on the number of refugees the U.S. resettles.

During Obama’s visit to Europe this week, he must commit to resettle more refugees and to provide more funding to aid refugees abroad. We are at a defining moment. The U.S. must reaffirm the values upon which it was built. Given the stakes, it cannot betray those values now. 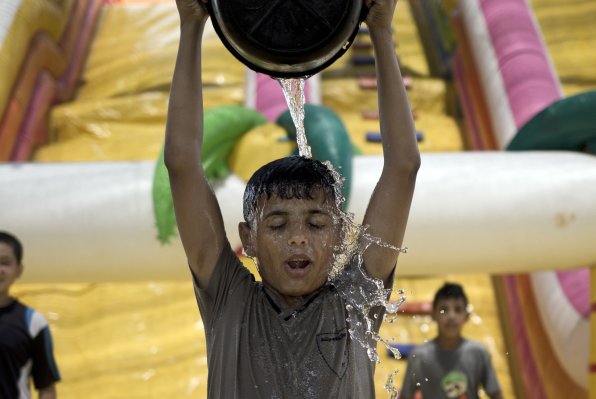 How to Solve Gaza’s Water Crisis
Next Up: Editor's Pick