Texas Sen. Ted Cruz has a clear early lead in the Republican race for unbound delegates who can vote their personal preference on the first ballot at the Cleveland convention, according to a TIME survey, presenting an obstacle for frontrunner Donald Trump if he falls just short of the 1,237 bound delegates needed to clinch the nomination.

Of the 63 unbound delegates who have already been named, 26 have told TIME or other news outlets that they are either committed to support Cruz, lean towards supporting Cruz or refuse to support Trump on the first ballot. By contrast Trump has the public support of only one delegate in North Dakota. Another delegate in American Samoa is Trump’s local campaign chair, but he declined to confirm to TIME that he will support Trump on the first ballot. Fifteen others declined to tell TIME their preference, and 15 more could not be reached for comment.

There are also five named unbound delegates from the Virgin Islands whose fate is unknown because they are in the midst of a legal battle over whether they will be able to vote at the convention. The Virgin Islands’ Republican Party chair, John Canegata, is fighting to have the original slate replaced by a different group.

Trump has said publicly that he may count on the unbound delegates to push him over the line. “If we’re 20 votes short or if we’re 100 short and we’re at 1,100 and somebody else is at 500 or 400, because we’re way ahead of everybody, I don’t think you can say that we don’t get it automatically,” Trump said on CNN in March.

So far, Colorado, North Dakota, Louisiana, Guam, the Virgin Islands and American Samoa have all named unbound delegates. Pennsylvania Republicans will elect another 54 unbound delegates on Tuesday, with Cruz and Trump both circulating slates of loyalists they hope will win a spot on the convention floor. Other delegates could be unbound at the convention under individual state rules if the candidates they are committed to, including Florida Sen. Marco Rubio and retired neurosurgeon Ben Carson, are not ballot options in the early rounds of voting.

“We are very confident Donald Trump will become the nominee in the first ballot,” said Barry Bennett, an aide to Trump working on the frontrunner’s delegate operation. “Between pledged and uncommitted delegates we will surpass 1,237 well before the convention.”

But almost 20 unbound delegates told TIME that Trump will not be able to count on their vote. Some, such as Guam Sen. Tony Ada, said they would vote for Cruz for as many ballots as it takes. “I [feel] strongly about Ted Cruz and plan to support him all the way,” he wrote in an email. North Dakota State Rep. Ben Koppelman also said he wouldn’t vote Trump, even if he comes in almost at the magic number. “I won’t be supporting Trump as long as Cruz is in,” he said.

Others like Utu Abe Malae, chairman of the Republican Party in American Samoa, said that he would never support Trump, though he was not ready to commit to Cruz. Delegates from American Samoa typically vote as a bloc, having done so in both 2012 (supporting Mitt Romney) and 2008 (backing John McCain). Reaching a consensus this election cycle, however, may be harder than in previous years, according to delegate Charles Warren. “Emotions are high, and I personally feel it will be very difficult to reach a consensus for the first ballot, even if one candidate has the requisite 1,237 delegates going in,” Warren told TIME via email. “As a matter of conscience, I will not vote for Trump, and I know some of my fellow delegates feel the same way about Cruz, so consensus will be a real challenge for us.”

Despite Trump’s big win in the New York primary, a contested Republican convention remains a likely outcome of state-by-state primary, caucus and convention process. Cruz and Ohio Gov. John Kasich are now both mathematically unable to win the nomination outright, and Trump would need to win almost 60% of all remaining delegates to secure the nomination with bound delegates on the first ballot. Trump opponents have argued that if Trump falls short on the first ballot, he will have been rejected by a majority of voters and delegates who backed other candidates. Republican party chairman Reince Priebus has indicated that the party will not coalesce behind Trump until he reaches a majority of delegates. “If you have 1,237 bound delegates, you are the presumptive nominee—that’s it,” a senior RNC official said Thursday. “If you’re short, nope.”

Interviews by TIME with 32 of the 63 unbound delegates revealed that 19 are committed to or leaning toward voting for Cruz on the first ballot. Six more, who did not respond to requests for comment from TIME, have indicated publicly their support for Cruz to other news organizations. And one other delegate said that while he was not supporting Cruz, he would never vote for Trump.

Still, Trump may have some wiggle room to woo those unbound delegates who now say they expect to support Cruz. North Dakota State Rep. Wesley Belter, for example, only said he planned to cast his first ballot for Cruz. “My first vote will definitely be for Cruz, and we’ll have to see what transpires after that first vote,” he said. “I think there’s only two candidates that can be considered at this point, and that’s Cruz and Trump.”

Chairman of the Colorado Republican Committee Steve House would not say who he plans to vote for, but said he was open to Trump “depending on what happens.” He said there are “multiple scenarios in which that makes sense” to cast a vote for Trump.

North Dakota State Sen. Jessica Unruh said she’s leaning towards Cruz, but she will do “whatever is best for the party for us to coalesce behind a candidate,” she said. “If that’s Mr. Trump, I think I can do that.” 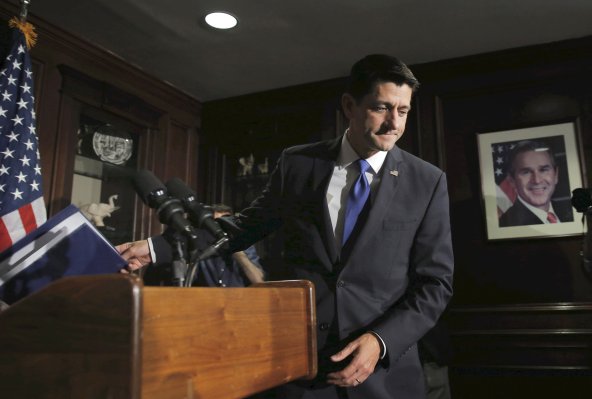 The GOP’s Plan to Look Past the Presidency—and Win Congress
Next Up: Editor's Pick