CHICAGO, IL - APRIL 19: Andrew Shaw #65 of the Chicago Blackhawks watches as the puck sails over Brian Elliott #1 of the St. Louis Blues on a goal by Duncan Keith in the third period in Game Four of the Western Conference First Round during the 2016 NHL Stanley Cup Playoffs at the United Center on April 19, 2016 in Chicago, Illinois. The Blues defeated the Blackhawks 4-3. (Photo by Jonathan Daniel/Getty Images)
Jonathan Daniel—Getty Images
By Daniel White

Chicago Blackhawks forward Andrew Shaw has been suspended one game following an incident where he shouted a homophobic slur at a referee.

The National Hockey League announced Wednesday that they are suspending Shaw for Game 5 of Chicago’s first round series against the St. Louis Blues. Shaw apologized earlier Wednesday after making the remark Tuesday.

“While Mr. Shaw was apologetic and remorseful for both the offensive comments and the inappropriate gesture directed at the on-ice officials, he must be held accountable for his actions,” the league’s Colin Campbell said in a statement. “The emotion of the moment cannot and will not be a mitigating factor for the conduct that is expected of an NHL player.”

Along with watching his team face a potential playoff elimination, Shaw has been fined $5,000 and will be required to undergo sensitivity training. 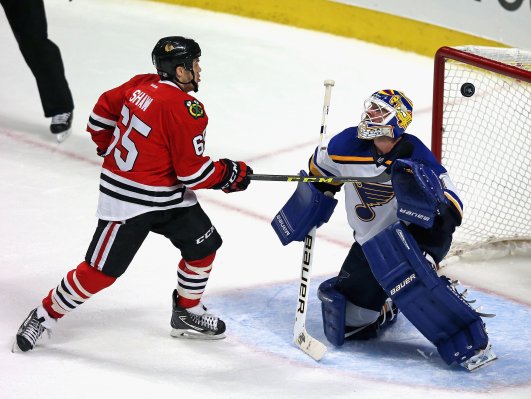 Hockey Player Apologizes for Yelling Homophobic Slur at Referee
Next Up: Editor's Pick