A man votes at Public School 22 on April 19, 2016 in the Brooklyn borough of New York City.
Stephanie Keith—Getty Images
By Sam Frizell

When Gemma Gonsalves gave her name at a public school off of Brooklyn’s Ocean Parkway, she was expecting to be ushered in quickly to vote.

But she said poll workers said she wasn’t listed in the voter rolls, telling her to go to a nearby courthouse and come back with a court order to vote. Already running late for her job cutting hair at a local Supercuts, she left and never did cast a ballot in the Democratic primary.

“I’ve been in this country more than fifty years,” says Gonsalves, an immigrant from Trinidad who voted for John McCain in 2008 and Barack Obama in 2012 at the same polling place. “It’s just so baffling.”

A wave of similar problems in New York prevented thousands of people from voting in the Democratic primary on Tuesday, prompting an investigation by the comptroller’s office and angry statement by New York City Mayor Bill de Blasio.

A total of 125,000 people in Brooklyn were removed from voter rolls between November 2015 and this month “without any adequate explanation” from the Board of Elections, Comptroller Scott Stringer said in a statement. Frustrated voters cast affidavit votes stacked high in polling places across Brooklyn or ran to get court orders. Many did not vote at all.

Both the Sanders and the Clinton campaigns are crying foul, but it may be the Clinton campaign that suffered the most. The areas where the most votes were lost was in Brooklyn—which she won with 60% of the vote, better than throughout the state as a whole.

“We are very concerned about it because we believe we probably lost a lot of votes there,” said Clinton communications director Jennifer Palmieri. “We are winning Brooklyn by a large amount if you look at the neighborhoods that were affected, these were neighborhoods that have very diverse populations, people who have traditionally been Clinton supporters. We think it’s more likely that that hurt us than him.”

Sanders has protested the voting irregularities, too. “It is absurd that in Brooklyn, New York—where I was born, actually—tens of thousands of people as I understand it, have been purged from the voting rolls,” he said during an evening campaign rally at Penn State University.

The executive director of the Board of Elections, Michael J. Ryan, said that thousands of people were removed or added to the rolls every year. He added that 125,000 missing people on the rolls out of 800,000 registered Democrats did not “shock my conscience,” according to the New York Times.

The Board of Elections’ commissioners are recommended by both political parties and appointed by the City Council for four-year terms. It did not immediately respond to a request for comment from TIME.

A total of 1.82 million people cast votes in New York. If tens of thousands of people were unable to vote, it could have meant a swing of a handful of delegates for either Clinton or Sanders. The voter affidavits have not been counted, so it is not clear which candidate they may have benefited. Still, most of the voters stricken from the registers lived in neighborhoods that were favorable to Clinton, based on Tuesday night’s results.

Gonsalves, at least, had been planning to vote for Clinton. 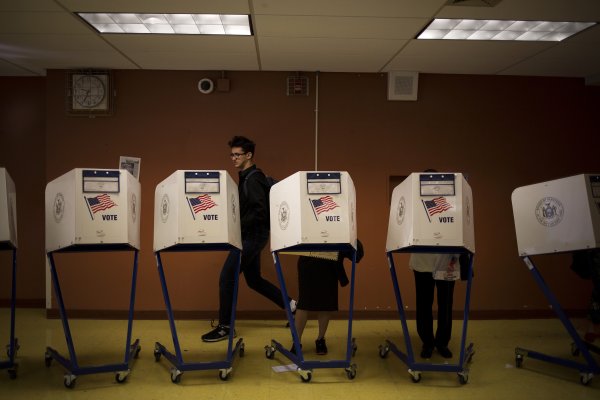 Young Voters Turned Out in Record Numbers in New York
Next Up: Editor's Pick