Why the Criminal Case Against Flint Water Regulators Is So Unusual

Two Michigan state employees tasked with ensuring the safety of the public water supply were charged with multiple felonies on Wednesday in connection with Flint’s lead water crisis—charges that experts say may be unprecedented for a water contamination case.

The charges against two Michigan Department of Environmental Quality (MDEQ) employees, which include misconduct in office and tampering with evidence, follow the disclosure late last year that officials at the state agency falsified reports about Flint’s water to make the lead levels appear lower than they actually were.

In cases involving environmental contamination, prosecutors usually go after the operators of water systems, who actually pump the water into residents’ homes, says Jane Barrett, a University of Maryland environmental law professor. It’s much rarer to see charges against the government regulators tasked with ensuring that the water is safe to drink—and in this case, those regulators now face the most serious charges of anyone involved so far.

“What you have here are regulators providing false information,” Barrett says. “It’s highly unusual for agency personnel charged with enforcing a law to be found tampering with evidence to the level at which a city’s water supply ends up being poisoned.”

The two MDEQ employees, Michael Prysby and Stephen Busch, have been charged with multiple felonies and misdemeanors, Michigan Attorney General Bill Schuette announced Wednesday. Michael Glasgow, Flint’s utilities administrator, has been charged with a felony for tampering with evidence and a misdemeanor for willful neglect of duty. The felony charges could each entail four to five years in prison, while the misdemeanors could mean fines of up to $10,000.

“They had a duty to protect the health of families and citizens of Flint,” Schuette said at a news conference Wednesday. “They failed.”

Internal MDEQ documents released last November showed that at least one MDEQ draft report from last year appeared to have been doctored so that samples of high lead levels in two Flint homes were dropped from the final report. That allowed officials to say that Flint was still meeting federal regulations involving the federal lead and copper rule. Glasgow, the utilities administrator, told Michigan Radio in November that he was pressured by MDEQ to take those high samples off the report.

Michigan Gov. Rick Snyder said Wednesday after the charges were announced that Prysby and Busch had been suspended without pay, the Detroit Free Press reports. Snyder referred to the allegations as “deeply troubling and extremely serious.”

Snyder was asked if he might face criminal charges in connection with the Flint crisis. He replied that he didn’t want to speculate, but said, “I don’t believe so.”

In 2014, Flint switched its water source from Lake Huron to the Flint River to save money, but the city failed to properly treat the water, allowing lead from the city’s pipes to leach into the public supply. For months, officials repeatedly said the water was safe to drink despite reports from residents and independent researchers that it was contaminated. In January, Snyder declared a state of emergency, and several state and federal investigations have been launched to determine what officials knew about the water. The city’s water supply is still not safe to drink without filters.

Earlier Wednesday, Schuette said his investigation was ongoing and more charges could be filed. “This is just the beginning,” he said. “Nobody’s above the law.” 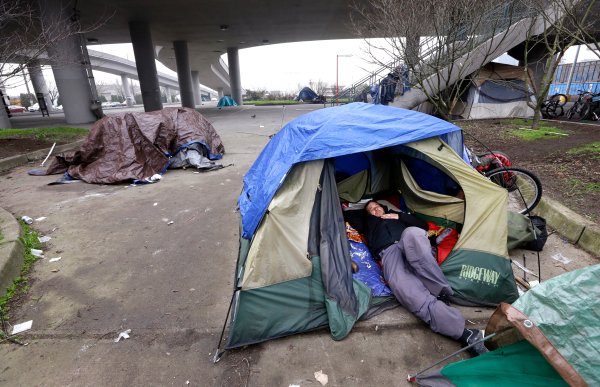 Why Amazon Is Housing the Homeless in Seattle
Next Up: Editor's Pick