Review: Apple's New MacBook Is a Gorgeous Laptop With 1 Drawback

The bad: Only includes one port; Expensive

Who should buy: Apple fans looking for a highly portable laptop who don’t use a lot of accessories or connections.

The MacBook Air set the standard for super-slim ultrabooks when it launched in 2008. Now, Apple is hoping its newest MacBook will have the same effect.

The result is a sleek, gorgeous machine with enough processing power for average users. But Apple still insists on giving the MacBook only a single USB port, and a Type-C one at that. While USB Type-C is a big improvement over past implementations (it’s faster and the cables work no matter which way you plug them in), there aren’t many compatible accessories just yet. I still want to be able to plug in accessories like hard drives and flash drives while simultaneously charging my laptop, too. That isn’t possible with the MacBook sans an adapter.

That being said, I understand why Apple designed the MacBook this way. Users who store most of their data in the cloud and don’t frequently plug their laptop into external monitors tend to value portability over connectivity. And as frustrating as a new standard might be, USB Type-C will be a big improvement when its time comes.

Giving the MacBook only a single port also allowed Apple to make it the company’s thinnest and sleekest laptop yet. The new MacBook is the same size and weight as last year’s model, weighing 2.03 pounds and measuring 0.14 inches thick at its slimmest point. The MacBook’s svelte design is undoubtedly its most striking feature. It’s so lean I almost forgot I was carrying a laptop in my bag. When I went to reach for it one time, I expected instead to pull out the 12-inch iPad Pro, which only weighs about half a pound less than the MacBook.

The only visible physical difference between this year’s MacBook and last year’s model is the new rose gold color option, marking the first time such a color has been available on a Mac product.

The MacBook’s 2,304 x 1,440 resolution screen is nearly as dazzling as the notebook’s design. Having a sharp and colorful screen doesn’t set the MacBook apart from its competitors — most high-end laptops come with incredibly high-res screens — but it’s a noticeable jump for those used to the MacBook Air. Colors looked rich, and viewing angles were wide enough for instances when you’re showing a photos or videos to a group huddled around the screen.

Other than its size and weight, those switching to the MacBook from a MacBook Air or Pro will notice another substantial change: the keyboard. Apple revamped the keyboard last year with a new butterfly mechanism that it says is 40% thinner than the scissor mechanism used on most traditional keyboards. The MacBook’s keys sit flush with the keyboard deck, rather than slightly protruding from it. I was skeptical of this, since I usually prefer keyboards with more depth and tactile feedback. But the MacBook’s keyboard felt surprisingly comfortable. I was actually able to type slightly faster with it than I usually do on my MacBook Air. I imagine this is because the MacBook’s keyboard, although shallow, doesn’t feel cheap like lower-quality keyboards on less expensive notebooks.

The MacBook also comes with Apple’s new Force Touch trackpad, which allows you to access certain shortcuts by pressing down harder on the touch area. You can preview links in Safari before opening them, look up a word on a website without leaving the page, and add dates to your calendar with a gesture Apple calls Force Click. While this worked well overall, I didn’t find myself using it very often. Some may find it helpful, but I wouldn’t consider it to be a deciding factor when shopping for a notebook.

With its latest-generation Intel processor and updated graphics, the new MacBook packs more than enough performance for the average user. Apple’s MacBook is powered by Intel’s new Core M processors, which are designed to enable super slim, fan-less laptops while providing long-lasting battery life. They’re not as powerful as Intel’s Core I processors, like those found in the MacBook Air and Pro models. But they’re plenty capable considering their compact size. I used the laptop for nearly an entire workday, and saw no issues when browsing the Web with multiple tabs and apps open. Apps also opened quickly with almost no noticeable lag.

Apple says the new MacBook’s graphics performance should be about 25% faster than that of its previous model. It’s not powerful enough to run hefty games on high settings, but casual gaming is smooth. Even playing BioShock Infinite on its lowest graphics settings was doable, but gameplay was slow with the settings bumped up to medium or high. Still, Apple isn’t marketing this notebook to gamers. It’s really meant for the average person who uses their laptop to check email, go online, stream Netflix and look at photos. On all of those fronts, it performs just fine.

The laptop’s battery lasted roughly seven and a half hours during my usage, which mostly included browsing the Web, playing casual games, and streaming video. This was almost enough to make it through an entire workday and is about on par with what some critics found when testing last year’s model. It’s important to keep in mind that battery life always varies depending on your own use, so actual results may differ.

The MacBook is a beautiful computer that’s designed for those who want the most portable desktop experience possible with an Apple device. Its lack of ports can be limiting — for some, that may be impossible to overlook. And, as is usually the case with Apple, the MacBook isn’t exactly a bargain. Samsung’s ATIV Book 9 offers similar hardware with a sharper screen and more ports for $100 less. It’s also nearly as light as the MacBook, weighing 2.09 pounds versus Apple’s 2.03 pounds. Still, the MacBook’s design and portability won’t disappoint Apple fans, so long as you don’t mind going all-in on USB Type-C. 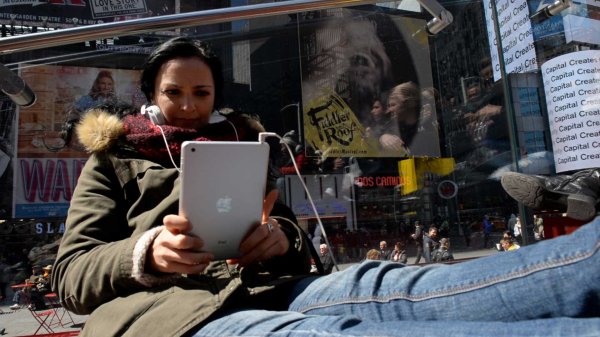 Why the New iPad Pro Could Be Your Next Camera
Next Up: Editor's Pick