The Treasury Department announced Wednesday that Alexander Hamilton will stay on the $10 bill, but abolitionist hero Harriet Tubman will replace Andrew Jackson as the portrait on the $20 bill.

The Department plans to unveil designs of the $5 bill, $10 bill, and $20 bill in 2020, in honor of the 100th anniversary of the 19th Amendment. As TIME reported last week, the timing on the production of the $20 bill is up in the air. Though the designs will be unveiled in 2020, the bills will enter circulation sometime later, with the $10 bill coming first. Because all of the bills will feature tactile changes to aide the blind, changes could take a significant amount of time.

On Wednesday, Secretary Lew said he has instructed the Bureau of Engraving and Printing and coordinated with the Federal Reserve to accelerate the process. Lew said there are two things he and the Chair of the Federal Reserve agree on: “we can’t compromise security and we have to work as quickly as possible,” he said.

Though Hamilton is staying on the front of the $10 bill, an image of multiple women’s suffragists including Lucretia Mott, Sojourner Truth, Susan B. Anthony, Elizabeth Cady Stanton, and Alice Paul, will appear on the back. Andrew Jackson will also remain on the $20 bill, he’ll just be moved to the back.

Treasury Secretary Jack Lew announced last June that a woman would appear as portrait of the bill, though over the course of 10 months—following public input and some intense lobbying efforts by various groups—his thinking changed. “For me, personally, there was an aha moment in July when it became clear that going bigger would give us the ability to tell more stories,” Lew said Wednesday.

Secretary Lew and Treasurer Rosie Rios, who has been working to get a woman on the currency since she arrived at the Treasury Department, said Wednesday the decision to place Harriet Tubman on the front of the currency was an easy one.

“The life of Harriet Tubman is really one of the greater American stories,” Lew said. “I think it’s a story that reflects both American values and American democracy, but also the power of an individual to make a difference in our democracy.”

The Treasury Department got millions of responses when they opened up the process to the public last June—through the mail, via email and on social media. The face of the current $10 bill has a lot of notable fans, including the Treasury Secretary himself, who has called Alexander Hamilton a personal hero. Hamilton has also become a pop culture mega-star thanks to the Pulitzer Prize winning hip-hop musical about his life. The star and creator of the musical, Lin Manuel Miranda, met with Lew to talk currency earlier this year.

Andrew Jackson, on the other hand, has a number of vocal detractors, led by the grassroots organization Women on 20s, which has ferociously lobbied for him to get the boot from the $20 bill. But leaders of the organization have recently shifted their tone given the probable timing of that change. If women have to appear on the back of the $10 bill, Barbara Ortiz Howard and Susan Ades Stone wrote in an op-ed for TIME, the Department should simultaneously redesign the $20.

Lew acknowledged he couldn’t make everyone happy with his decision, but said his decision takes a “long-term view.”

“I knew we couldn’t make everyone happy,” he said. “But there’s a reason the decision rests with the Secretary of the Treasury to make decisions that are balanced and have a long term view.”

The entire series of bills will get a redesign, including the the $5 bill, which will feature images of historic events in the fight for Civil Rights for black Americans that occurred on the steps of the Lincoln Memorial, including Martin Luther King’s “I Have a Dream” speech and a 1939 performance by Opera singer Marian Anderson. 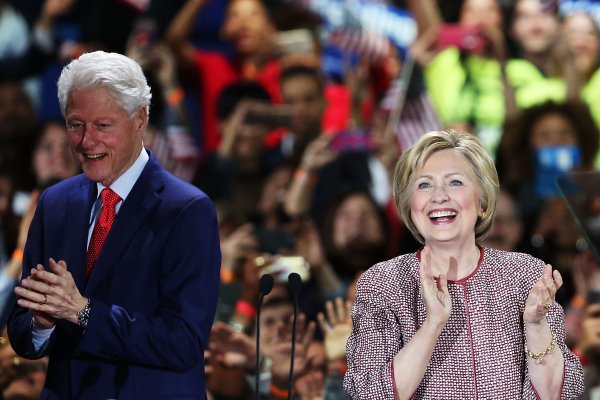 How The Clintons Think About Elections
Next Up: Editor's Pick