Photographs by Ben Hassett for TIME
By Nancy Gibbs

Each year our TIME 100 list lets us step back and measure the forces that move us. Which is more powerful, hope or proof? Ambition or altruism? The lessons of the past or the lure of the future? The people we spotlight range from the globally famous to the literally anonymous—we leave it to you to guess the true identity of author Elena Ferrante. There are world leaders and local activists, artists and athletes, scientists, moguls and a number of people who are running for President of the United States. One way or another they each embody a breakthrough: they broke the rules, broke the record, broke the silence, broke the boundaries to reveal what we’re capable of. They are seekers, with a fearless willingness to be surprised by what they find. As Lin-Manuel Miranda, whose musical Hamilton just won the Pulitzer Prize, puts it, “What’s the thing that’s not in the world that should be in the world?”

There are all sorts of yardsticks for measuring influence: Donald Trump’s 5.9 million Google News mentions in the past year, Adele’s 64.8 million Facebook likes, the records shattered by Usain Bolt on foot, Lewis Hamilton on wheels, Katie Ledecky in the pool, Stephen Curry on the court. To capture what sets the honorees apart, we reached out to people who watched them rise, knew them when, understand firsthand the opportunities they seized and the obstacles they overcame. Bill Clinton writes on how the community health workers dispatched by Raj Panjabi’s Last Mile Health were critical to stopping the spread of Ebola in West Africa. Robert Redford lauds Christiana Figueres—“a force of nature”—for shepherding 196 countries through the historic U.N. climate-change agreement in Paris in December. Anthony Bourdain looks at the next mission for culinary entrepreneur Roy Choi to bring healthy, affordable food to inner-city neighborhoods. Bill and Melinda Gates write about the pledge by Priscilla Chan and Mark Zuckerberg to commit 99% of their Facebook wealth to the humanitarian Chan Zuckerberg Initiative. Astronaut Scott Kelly describes what it was like to watch Lester Holt’s NBC Nightly News from the International Space Station.

The fun of shaping the list is sharing the vision of people exploring the frontiers of art, science, society, technology. Palmer Luckey has a vision, and he wants us to put on his VR headset and experience it. Leonardo DiCaprio has a vision of an ecologically stable planet. Eli Broad has a vision of a revitalized downtown Los Angeles. Jaha Dukureh envisions a world in which girls can grow up without fear of mutilation. Alan Stern had a vision to explore Pluto, and this year his New Horizons spacecraft sent back the pictures. Reince Priebus has a vision … of a consensus Republican nominee.

This issue was designed by Carrie Gee, with Natalie Matutschovsky overseeing photography. The six covers were shot by photographer Ben Hassett. For the seventh year, deputy managing editor Radhika Jones was the impresario of the issue. “When I look at the list overall,” she says, “I’m humbled by the idea that we still have so much to learn—about our species and our place in the universe, about who we are as individuals and as nations, about what we owe each other and what we owe ourselves.”

The people on the list, each in their own way, have lessons to teach. We can debate those lessons; we don’t have to endorse them or agree with them. But the influence of this year’s TIME 100, to my mind, is that down to the last person, they have the power to make us think. And they are using it. 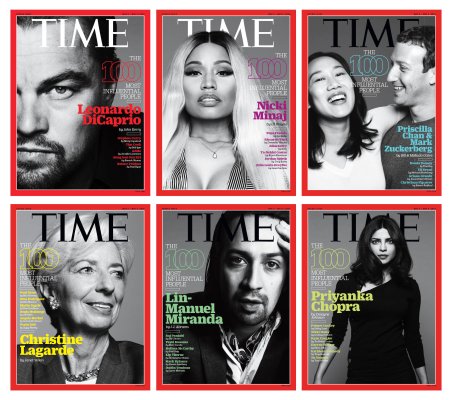 The 100 Most Influential People in the World
Next Up: Editor's Pick