If you’ve recently started to bite your nails, noticed your heart rate speeding up more frequently and are feeling increasingly nervous and helpless, it could just be the 2016 presidential election.

Engaging with politics may be part of our civic duty, but presidential elections can be emotionally exhausting, and the more engaged a person is, the more likely they are to become fatigued, anxious or depressed, says Dr. Margaret Wehrenberg, an Illinois-based psychologist who specializes in treating stress and anxiety. The current state of presidential election coverage in the U.S. is one of constant saturation that lasts for about a year and a half, which is an awfully long time to be stressed out.

Of course, we need and deserve access to information about political candidates. Staying apprised of presidential candidates’ campaigns is part of being an informed citizen, and the news media are supposed to enable this. But does the coverage need to last as long as it does? And are we being given the best information through the best methods? Far from it.

News media often sensationalize stories, especially political stories, and bait audiences with hyped-up language to keep them watching or reading. Cable news stations often repeat the same election updates, video clips, audio clips and images over and over throughout the day. This can make election stories, particularly the more incendiary and sensational ones, seem inescapable.

Feeling committed to a certain candidate but not knowing whether or not they will ultimately be successful in winning their party’s nomination or the general election is anxiety-inducing in and of itself. But engaging with media that constantly plays with this uncertainty by speculating over who may win or lose a given primary, who is up by how many points in a recent poll, and what the outcome of upcoming debates will be likely only fans the flames of anxiety, causing us to feel more unsure, and thus more desirous of information that will give us answers, Wehrenberg says. Some may continue to stay glued to election coverage, scanning for clues of what the future holds.

Social media doesn’t help. Many people can likely relate to the sense of frustration, anger, exasperation and outright stress that results from arguing about politics via Twitter or Facebook. Conversations that happen quickly over written text are much more likely to become hostile and angry than face-to-face interactions, Wehrenberg says. The compulsion to discuss these issues over social media makes sense, given that this is a medium through which we are accustomed to expressing ourselves, but it often seems that social media conversations about politics are counter-productive.

It’s also impossible to ignore the added stress experienced by people of color this election season. With offensive rhetoric plastered all across national and local coverage of the election (particularly of Republican candidates, and especially from Donald Trump, who has repeatedly made racist statements about Mexicans, black people and Muslims), the constant exposure to coverage of these politicians and the offensive rhetoric they espouse can be particularly exhausting for people of color.

So how can we make our experiences with the election less stressful and more productive?

The best solution would be to shorten the election process. For example, in Canada, the federal election process has never lasted more than 78 days, a cool two and a half months. Mexico’s legislature passed a law in 2007 that limits the duration presidential election campaigns. In Argentina, candidates can only run advertisements for their campaigns for 60 days leading up to election day. Coverage this short may seem unfathomable to those of us in the U.S. who are accustomed to a bombardment of political ads, debates and general coverage lasting close to half as long as an actual presidential term.

Unfortunately, the U.S. is unlikely enact legislation that limits the duration of presidential election seasons. Fortunately, there are things we can do to reduce the impact of stress and anxiety on our bodies and minds, while still keeping up with the latest news.

Wehrenberg suggests that certain methods of engagement are inherently less stressful. Reading print coverage such as newspapers and magazines means that we can be more selective about which articles we read and can see a finite end to the story. Print also has the benefit of being free of Internet comment sections.

The information we get in debates is often delivered in the form of sound-bites, and there isn’t fact-checking in real time. By checking out a candidate’s website directly and comparing it with public voting records, we’re not only more in control of how long we’re engaging, but we’re also empowering ourselves to find out if what they’re claiming is true.

Media consumption during the drawn-out presidential election ordeal is a necessary evil: we need to be informed, but there’s little recourse for obtaining information that doesn’t have the potential to send our nervous system into overdrive and trigger anxiety. Since there’s hardly any full escape, we must check the facts ourselves, avoid debates and remember that no matter what, Nov. 8 will come. 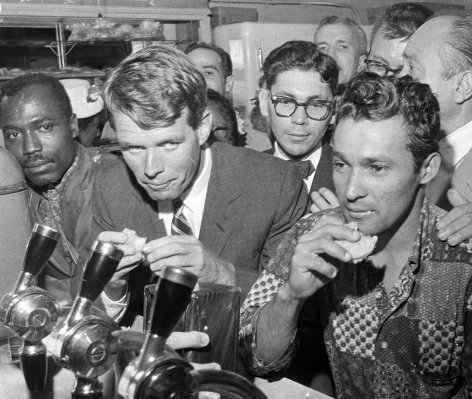 A Brief Visual History of Eating on the Campaign Trail
Next Up: Editor's Pick