They stared at cheesecake and swallowed hot dogs, rode the subway, invoked 9/11 and defended or maligned New York’s values. They pitched to hipsters, Islanders, Brooklynites, Upstaters, Hasids and Baptists. They bragged, insulted and provoked.

Now, they want your vote.

After a circus-like primary of empire proportions, New Yorkers will choose a Republican or a Democrat presidential candidate on Tuesday, playing a center-stage role in a presidential election for the first time in decades.

The primary on Tuesday will cap off rambunctious weeks of campaigning that have favored the home field candidates, Hillary Clinton and Donald Trump.

For the two frontrunners, strong victories in their home states would yield large numbers of delegates (247 up for grabs for Democrats and 95 for the Republicans) and assuage their followers’ angst after a string of losses to their insurgent challengers, Bernie Sanders and Ted Cruz.

Clinton and her aides projected confidence this week, with most polls showing her double digits ahead of Sanders. A strong Clinton victory could all-but secure the nomination for her over Sanders, who currently lags by more than 200 pledged delegates.

Meanwhile, Donald Trump—all but assured of a blowout victory in the state—is planning a victory rally at Trump Towers, the epicenter of his wealthy empire and the place where he began his campaign by entering on an escalator and calling undocumented Mexican immigrants “rapists” and “criminals.”

“New Yorkers are fighters,” said Donald Pagano, a Staten Island electronical contractor and Trump supporter who might have also been referring to Clinton, a self-branded fighter, too. “We always come back. We’re the ultimate fighters.”

No candidate has campaigned as hard as Clinton in New York, and for good reason. She has lost seven of the last eight contests to Sanders over the last few weeks, granting Sanders a flood of fundraising cash and the standing to criticize her harshly on the campaign trail. For Clinton to lose a contest in the state she represented for eight years would be an embarrassment and raise new questions about the strength of her candidacy in a general election.

On Monday Clinton seemed to hit every corner of the city, speaking at an LGBT Center in Greenwich Village and an Irish-Americans event in Midtown, stopping for ice cream in the East Village, bubble tea in Flushing and a carwash in Elmhurst.

“I am hoping to do really well tomorrow. I am hoping to wrap up the Democratic nomination,” Hillary Clinton said at the LGBT Center. “And I know that we’re going to win, because we’re on the right side of history. We stand up for New York values, which are American values.”

Trump is likely to exceed fifty percent of the vote in New York, according to polls that show him defeating Ted Cruz and John Kasich by wide margins. And if Trump wins more than half the vote in any particular congressional district, he will win all three delegates from that district. That means a particularly strong showing could give him close to all of the state’s 95 delegates.

On Staten Island on Sunday at a GOP fundraiser, Trump warned that the Party’s “bosses” are taking over the primary by attempting to fix the rules at a contested Republican convention, and spoke with a veiled threat of violence. “Many millions of people, these are very smart people, very strong people, they see what’s going on,” Trump said. “You’re going to have a very angry, group of people at the convention… I hope it doesn’t involve violence and I’m not suggesting that.”

Sanders and Cruz have made a fight out of the New York primary. The Vermont senator assailed Clinton as unqualified to be president and accused her of making a racist remark in the 1990s when she called certain black criminals “superpredators.” Sanders attacked her relentlessly during last week’s CNN debate and his campaign filed a complaint with the FEC on Monday alleging fundraising irregularities by her campaign.

On Monday morning, the day before the primary, Sanders walked a 15-block stretch through Midtown on 6th Avenue, greeting Manhattanites and posing for selfies. He visited a public housing project in the Bronx and finished the day with a rally in Long Island City, Queens, where he reassured voters he has a shot at a win.

Still, in an email to supporters, Sanders’s campaign appeared to downplay expectations. “Here’s the truth: we don’t have to win New York on Tuesday, but we have to pick up a lot of delegates,” wrote Jeff Weaver, the campaign manager this week.

Cruz, meanwhile campaigned heavily in Western New York’s blue-collar, conservative districts. But on Monday he was plotting a path forward in Maryland and other upcoming contests where he will perform better than here.

Clinton will be in Midtown Manhattan on Tuesday night for what is shaping up to be a victory party, while Sanders will be in Philadelphia—an indication, perhaps, of where the candidates are stronger.

The primary in New York has been an exercise in pandering, with each candidate targeting the state’s myriad groups, each with its own set of interests and cuisines.

Clinton played dominoes in East Harlem and drank bubble tea in Flushing. Sanders took a tour of his old Brooklyn neighborhood. Cruz rolled matzah with the Chabad Jews in South Brooklyn. Kasich sampled sandwiches and pasta fagioli in the Bronx. And Trump loves Staten Island pizza. “I have a lot of them,” he said, when asked what his favorite pizza place on the island is. “I have like, twelve.”

On Tuesday, New Yorkers will remember Clinton as the state’s Senator and Trump as the man who literally has his name all over the city, usually in ostentatious gold on one of his developments.

That will be good enough for some. 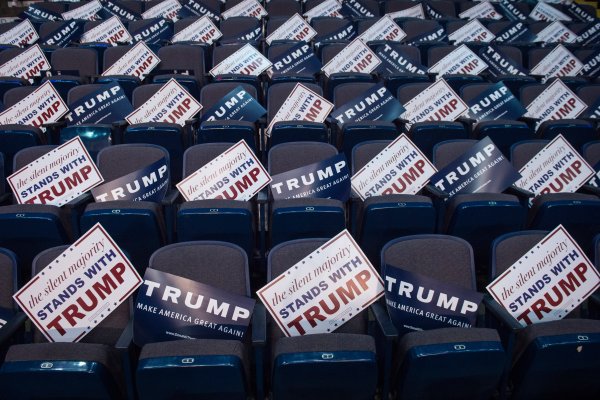 Majority of Voters 'Could Not See' Supporting Donald Trump, Ted Cruz or Hillary Clinton
Next Up: Editor's Pick