How a German Comic Exposed Merkel’s Weakness by Provoking Turkey

Europe’s plan to stop the influx of asylum seekers was always going to be expensive. As a kind of down payment, the E.U. pledged last month to give Turkey more than $6 billion to stop migrant boats from reaching European shores. But the higher price, at least for German Chancellor Angela Merkel, may come in the form of political capital, and she is spending it fast in her effort to keep the Turkish government on board.

On Friday, Merkel offered another gesture of appeasement to Recep Tayyip Erdogan, allowing the prosecution of a German comedian for making fun of the Turkish President on television. After watching the satirical show, Erdogan demanded that its author, Jan Böhmermann, face charges in Germany for insulting a foreign head of state. That offense carries a penalty of up to five years in prison under an obscure German law dating back to the 19th century, and to the outrage of many of her own political allies, the Chancellor agreed on Friday to let prosecutors consider Erdogan’s complaint.

She has already paid a lot for that decision. A nationwide survey published over the weekend showed a steep drop in her popularity, which pollsters attribute in large part to the Böhmermann case. A full two-thirds of respondents disapproved of Merkel’s acquiescence to the Turkish leader on an issue so closely tied up with freedom of expression. A separate survey released on Sunday clocked her overall approval rating at 45%. That’s lower than at any point in the refugee crisis so far, and down from 56% at the start of this month.

This type of fallout from the refugee deal with Turkey has long seemed unavoidable to many in Berlin’s political circles. As the leader of the main transit country for millions of refugees from Syria and Iraq, Erdogan has been Europe’s most important partner in stemming their arrival in Europe. “He is in a very, very strong position. So he is dictating the price,” Peer Steinbrück, a member of the foreign affairs committee in the German Parliament, told TIME when the refugee negotiations with Turkey got under way last fall.

Read more: Why Europe’s Migrant Deal With Turkey Could Lead to More Anguish

As those talks progressed, some of the delegates felt European leaders could afford to take a tougher line, at least in urging Turkey to crack down on the illegal work of migrant smugglers. “Politically and strategically, Turkey needs Europe,” says Nikos Xydakis, who represented Greece in those negotiations as the Alternate Minister for European Affairs. “It has no other allies.”

Turkey has indeed become more isolated in 2016. Erdogan is waging a war against Kurdish rebels in the country’s south, and across the border in Syria he is in conflict with the regime of Bashar Assad and his regional allies Iran and Lebanon. To the northeast, he is in conflict with Russia, which has imposed sanctions against Turkey for shooting down a Russian fighter jet last fall. A series of terrorist attacks in Turkey’s biggest cities have killed scores of people this year. “He’s in a trap,” says Xydakis. And the European Union could have exploited that trap by threatening to sanction or otherwise isolate the Turkish government for allowing the transit of refugees.

Instead, the E.U.’s deal with Turkey in March was all carrot and no stick. The reason came down to the desperation of E.U. leaders in seeking an end to the influx of migrants. They didn’t have time to play hardball with Turkey while xenophobia and right-wing populism were on the rise across the Continent. They needed an urgent solution, and they were willing to pay for it. Apart from the offer of €6 billion in aid, the E.U. agreed to ease visa restrictions for Turkish citizens. In exchange, Turkey has agreed to break up the networks of migrant smugglers that have been operating on its soil with impunity. It has also pledged to take back migrants who fail to get asylum after landing in Greece.

The results so far have been impressive. In the first three months of this year, roughly 22,000 migrants arrived by boat in Greece from Turkey, down from more than 150,000 in the same period last year, according to the International Organization for Migration, which monitors the flow.

The decline has brought relief to E.U. countries, especially Germany, where last year’s arrival of more than a million migrants and refugees overwhelmed the asylum system and caused an all-out political crisis. As a reward, Merkel’s government has even thrown its support behind Turkey’s bid to become an E.U. member. Ursula von der Leyen, the German Defense Minister, told the news magazine Der Spiegel last week that it would be “right to proceed with the negotiations on Turkey’s E.U. membership now.”

But Turkey’s effort to join the E.U. has been stalled for years in part because of its deteriorating record on human rights and freedom of expression. If this bid is to be successful, Erdogan would in theory have to embrace European values of free speech. But his attacks on the media have only gotten worse during the refugee negotiations. Days before signing the deal with the E.U. last month, Erdogan’s government seized control of the country’s most popular independent newspaper. And on Monday, Turkish police arrested more than 100 people suspected of having ties to an exiled opposition leader. The charges? Being members of a “terror group.”

Read more: The First Migrants Deported Back to Turkey Under an E.U. Deal Face an Uncertain Future

The Turkish leader, in power since 2001, has also grown increasingly touchy when it comes to personal insults. In the past two years, his government has reportedly opened nearly 2,000 criminal cases — or about three per day — against Turkish citizens accused of insulting their President. In one case, a Turkish doctor is facing a stint in prison over a Facebook post that compared Erdogan to Gollum, the slimy creature from Tolkien’s Lord of the Rings.

By filing his complaint against the German comedian, Erdogan seemed eager to export this campaign of intimidation to the E.U. “We have already given him the keys to the gates of Europe,” Guy Verhofstadt, a prominent member of the European Parliament, said last week. “Now we risk handing over the keys to our newsrooms to him so that he decides and controls our media.”

Merkel had it in her power to stop him. Under the terms of the law that Erdogan invoked in filing his complaint, the German government must grant approval to its prosecutors before they can charge anyone with insulting a foreign leader. Instead, Merkel pledged to repeal that law by 2018, leaving it up to the prosecutors and courts to decide the Böhmermann case. That didn’t make the comedian feel much more secure in his rights to artistic freedom. Last week, he went under police protection, suspended the broadcasts of his TV show and effectively went into hiding. (Attempts to contact him for this article were unsuccessful.)

None of that looks encouraging for Germany’s commitment to free speech. But in some ways it was characteristic of Merkel. “It is very atypical for her to provoke controversies,” says Hans Eichel, a former German Finance Minister who has known Merkel for years. One of the Chancellor’s biographers, Stefan Kornelius of the newspaper Süddeutsche Zeitung, says she tends to avoid confrontation. “Merkel has a hard time applying toughness,” he told me last fall during an interview for TIME’s Person of the Year issue. “She can only be tough when she has a reason for it.”

Even after a caustic debate within her government that lasted most of last week, Merkel did not find reason enough to stand up to Erdogan in the case of the comedian. Instead she has left the final call to German prosecutors, who have yet to decide whether to file any charges. In some sense this was a clever dodge. It allowed her to invoke the separation of powers by passing the buck to the legal system. Some have even praised her for it. “Merkel’s decision to let the rule of law take its course is a sensible one,” wrote Richard Fuchs, a commentator for Deutsche Welle.

At bottom, though, the decision came down to realpolitik. With a trip to Turkey planned for the end of this week, Merkel did not want to antagonize Erdogan at the moment when his refugee deal with E.U. was just starting to bear fruit. Perhaps more than any other European leader, she needs him to hold up his end of the bargain. Turkey is still playing host to more than 2 million Syrian refugees, and by easing up on the smuggling networks that arrange their journeys out, Erdogan can let their boats set sail for Europe anytime he likes.

Over the coming months, that threat will likely remain his trump card in any talks with the Europeans, and he will not part with it easily, says Aya Burweila, an expert on international affairs at the Research Institute for European and American Studies, an Athens-based think tank. “The worse the refugee crisis gets, the bigger Turkey’s bargaining chip with the E.U.,” she says.

So rather than seeking a permanent resolution to the crisis, Erdogan could just keep demanding more concessions from the Europeans, challenging Merkel to call his bluff every time. The German Chancellor had better hope she can afford to keep him happy. 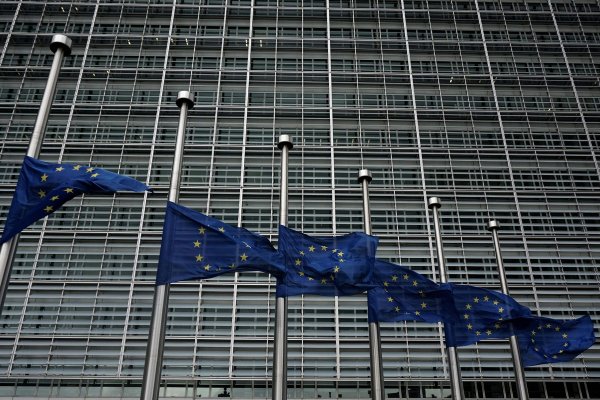 EU Threatens to Require Americans to Get Visas, Report Says
Next Up: Editor's Pick