On Monday, he finally met Trump for the first time, along with 60 other representatives from his coalition.

Cowley’s group, called the “Coalition of Pastors and Ministers in America,” includes preachers with large television and radio ministries, evangelists, Pentecostals and a handful of North American Indians and Mexican American pastors. It is also the heart of Trump’s new National Diversity Coalition effort, the only group with any members listed on the coalition’s website. (Groups such as “Turkish Americans for Trump” and “Minorities for Trump” only name their leaders.)

Until Trump announced his candidacy last June, Cowley and his wife Gillian had never before considered getting involved in politics. “We had a flood of hope come into our hearts,” he says. “I believe it will be a gift from God, of mercy, to save this nation.”

A Seattle pastor who sees himself following the tradition of Billy Graham, Cowley hosts large-scale conversion rallies in Africa. In February, he sent the endorsements—along with his own crusade strategy manual on how he reaches stadiums of people abroad for Jesus—to top Trump advisor Michael Cohen. Within a few hours, Cowley says, the campaign put him in touch with Darrell Scott, a black pastor in Cleveland leading Trump’s diversity efforts.

“I’ve worked in Africa, I’m comfortable with the African people, my wife and I are at home in Africa, now here is an African-American man calling me, this is right down our alley,” Cowley says. “This is God.”

His support for Trump, he says, is spiritually motivated. “As I prayed about it, what dropped into my heart … was a Scripture in the Bible, ‘They strained over gnats and they swallowed camels,’” Cowley explains, citing a verse from the gospel of Matthew in the New Testament. Gnats, he explains, are like Trump’s past indiscretions, and Christians should be more concerned by camels, or issues of substance. “God has restored him, given him Melania, he’s blessed, he has relationship with former wives,” Cowley says. “God doesn’t look at the past, he looks at where we are today.”

Cowley sees in Trump a shared spirit to his own missionary efforts. Like Trump’s self-financing campaign strategy, Cowley says, he too has paid his own way to run evangelistic missions in Africa. The Cowleys organized a mass evangelistic, five-day crusade in Gabon, a majority Christian country in Central Africa, in 2012. The event, called a “Nation Wide Blitz,” featured nine simultaneous crusades led by nine mass evangelist preachers from the U.S., Norway, France and Mexico. Cowley says that some 432,000 people received Jesus Christ as their savior during the event. He reports his own numbers—according to the Pew Research Center, Gabon has 1.2 million Christians but only a combined 340,000 Muslims, folk religion worshippers or unaffiliated people.

Pastors like Cowley, who have large missionary projects abroad, give Trump an unusual way to tout diversity credentials. Trump has cultivated a following among a set of pastors in the Pentecostal tradition, like Scott, and others who believe that God wants people to prosper in health and wealth. Cowley says he is a non-denominational Christian, an independent evangelical category that historically overlaps with Baptist and Pentecostal traditions of conservative Christianity in the U.S. and focuses heavily on missionary work abroad.

More broadly, the diversity coalition’s advisors include leaders of other small, grassroots religious groups. Sajid Tarar, a lawyer and US citizen from Baltimore born in Pakistan, recently started American Muslims for Trump, which he says now numbers about 150 people in Maryland, and he is preparing to go national. Tarar believes that democracy in the U.S. has some flaws that must be corrected.

“Why do we never see a taxi driver becoming a congressman?” he says. “I believe he is the only candidate that can take the U.S. to the next level. He is the only person who has created billions, large billions, who knows how to do it.”

Another diversity coalition advisor, Jasdip Singh, a health care businessman from Baltimore, started Sikh Americans for Trump. Singh, a U.S. citizen who moved to the U.S. 30 years ago, says he wanted to act after he saw a Sikh protestor removed from a Trump rally, when “some in my community started to give it a spin that it was a racist attack against Sikhs,” he says. “That is not true.” Instead, he says, economic concerns motivate him.

“The country that I came to is not what America is today,” Singh says. “Immigrant values are more aligned to the Republican Party than the Democratic Party, they believe in working hard and getting into business.” 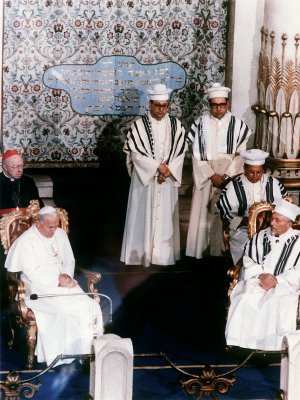 What Happened the First Time a Pope Visited a Synagogue
Next Up: Editor's Pick