Why Amazon Is Now Housing the Homeless in Seattle

A man lies in a tent with others camped nearby, under and near an overpass in Seattle on Tuesday, Feb. 9, 2016. Seattle has the third-highest number of homeless people in the U.S.
Elaine Thompson—AP
By Josh Sanburn

Homeless families in Seattle now have an unlikely location to take shelter: a building that belongs to Amazon.

The tech giant announced last week that it was working with Mary’s Place, a Seattle organization that offers services to the homeless, to turn a building on its downtown campus into a temporary shelter. The non-profit spent much of Monday morning moving in furniture and renovating the building, and expects at least a couple families to move in Monday afternoon.

Amazon bought the building—a former motel and dormitory—in 2014 as part of its downtown campus but has since decided to tear it down. As part of Mary’s Place, the building is becoming a temporary shelter before Amazon demolishes it next year.

“As we grow in Seattle, we recognize the importance of investing in our hometown in ways that benefit our neighbors and our employees,” Amazon said in a statement.

The homeless shelter may be a fitting community giveback for Amazon, which has often come under criticism for its expansion efforts in Seattle. The company’s rapid growth in the last few years has led to a higher cost of living in the city and in turn contributed to the spike in the number of residents without shelter, experts say.

“Homelessness is on the rise in Seattle, and the primary attribution is the rapid increase in housing costs,” says Rachel Fyall, a University of Washington public policy professor. “We have a rapidly growing economy. Amazon in particular has had a lot of growth in the downtown core.”

Officials with Amazon declined interview requests for the story.

In November, the city announced a state of emergency on homelessness, freeing up $5 million in funding and allowing officials to take measures normally reserved for natural disasters or civil unrest. The most recent one-night count of those living on the streets totaled 4,505 people, a 19% increase in homelessness over last year. In 2012, that one-night figure was 2,594.

Hartman says the new building is increasing the non-profit’s temporary shelter capacity from 200 to 400 beds, adding that she’s grateful Amazon has “chosen to step up and highlight this issue and be part of the solution.” The company has also recently launched a page on its site in conjunction with Mary’s Place where shoppers can purchase items for homeless families.

The city has been using a housing-first approach in dealing with homelessness, a strategy that attempts to permanently house those without shelter first before dealing with other issues, including substance abuse or mental illness. Seattle Mayor Ed Murray has also called for doubling the city’s $145 million housing levy to increase funding for permanent housing that has social services built into it. The sheer numbers of those who are now homeless in Seattle, however, will likely need more than just efforts taken at the city level—advocates and researchers say it will require contributions from the very companies that are contributing to the problem.

“Temporary shelter, which is what is being proposed, is certainly helpful,” Fyall says. “But it’s not leading to a permanent solution.” 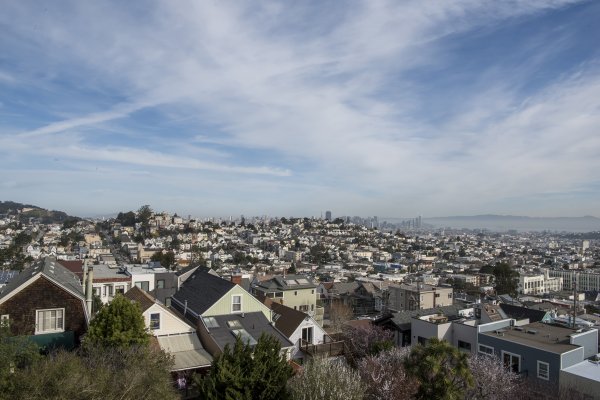 Here's What It Takes to Be 'Wealthy' in San Francisco
Next Up: Editor's Pick