The new iPhone 6s Plus are display in a Softbank store at the high-end shopping district of Ginza in Tokyo, Japan, on Sept. 25, 2015.
David MAREUIL—Anadolu Agency/Getty Images
By Don Reisinger / Fortune

Apple’s iPhone business had a rough first quarter, according to new data from research firm TrendForce.

“Sales of iPhone 6s have been lackluster as the model lacks exciting new features,” the company said of Apple’s first quarter. TrendForce added that Apple itself has become “more conservative” with its smartphone inventory in preparation of launching its next handset.

The findings come on the heels of Apple announcing its latest iPhone, the iPhone SE. The device, which comes with a 4-inch screen, is designed to appeal to the midrange of the market and attract more customers who might be turning to cheaper devices in emerging markets. However, TrendForce, which has offices in Beijing and Shenzhen, says Apple’s latest handset could have some trouble attracting customers in the critical Chinese market.

“As the budget model, iPhone SE will support Apple’s overall shipments in the second quarter before the next major iPhone release,” TrendForce smartphone analyst Avril Wu said in a statement. “However, iPhone SE is going to face severe price competition from Chinese branded products in its target market, which is the mid-range device segment.”

Wu was bearish on Apple’s chances of success with the iPhone SE, projecting that the company will ship fewer than 15 million units this year.

The weak iPhone SE, combined with Apple’s own “conservative” handling of its supply chain, prompted TrendForce to project Apple would ship 213 million iPhones this year, down 10% compared with the previous year.

Despite the bearish outlook on Apple, TrendForce was surprised by Samsung’s success in the first quarter, saying that shipments “exceeded expectations” and reached 81 million units, a gain of 2.5% compared with the fourth quarter. Samsung’s shipments were, of course, boosted by its Galaxy S7 and Galaxy S7 Edge flagship devices, but nonetheless helped it take the top spot in the first quarter with 27.8% market share. The successful first quarter prompted TrendForce to raise its annual Samsung smartphone shipments to 316 million units, nearly matching its total shipments last year.

“Huawei won’t be able to overtake Apple and become the No. 2 smartphone brand worldwide any time soon,” Wu said in a statement. “Still, the market share gap between Huawei and Apple are expected to narrow with each passing year.”

That said, this is just one quarter and it’s unknown at this point what Apple has up its sleeve for the rest of the year. The company is expected to launch the iPhone 7 later this year, which should come with a new design and several improved features. Apple has been doubted before, but one exciting new device could flip forecasts on their heads. Whether the iPhone 7 could be the device to do that remains to be seen.

Apple did not immediately respond to a request for comment on the TrendForce report. 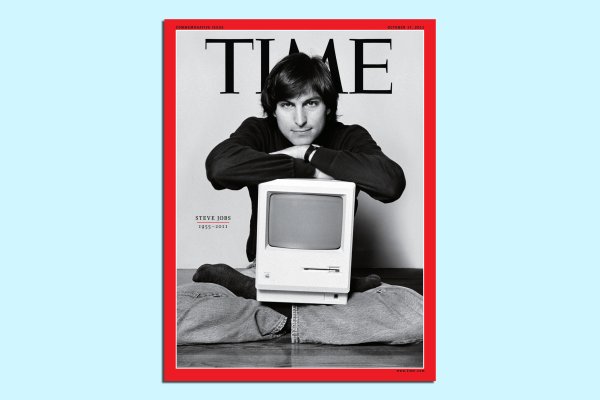 11 Times Apple Appeared on the Cover of TIME Magazine
Next Up: Editor's Pick