Obama Raises Hackles in Europe Debate as He Visits U.K.

Campaigners for Britain to leave the E.U. are seething over President Barack Obama’s visit to the country this week, as he is expected to weigh in on the looming referendum by supporting “a strong United Kingdom in the European Union.”

As Obama prepared to fly to the U.K. for the April 21-23 visit, the country’s former defense secretary Liam Fox joined other so-called Euroskeptics admonishing the president for his planned remarks.

“While the President will be heard respectfully, many of us will be raising an eyebrow at the fact that he thinks that we should accept a diminution of sovereignty that he would never accept,” Fox, a Conservative member of parliament who supports Britain’s withdrawal from the 28-nation bloc, told TIME. The U.S., he argued, would never stand for the kind of control he believes the E.U. has over Britain.

President Obama arrived in Britain at the same time as the Daily Telegraph published his impassioned plea to U.K. voters to stay in Europe. “As citizens of the United Kingdom take stock of their relationship with the E.U., you should be proud that the E.U. has helped spread British values and practices – democracy, the rule of law, open markets – across the continent and to its periphery,” he wrote.

Obama described the close links developed between the U.S. and the U.K. since the Second World War and stressed the importance of the U.K.’s continued membership of the E.U. “I will say, with the candour of a friend, that the outcome of your decision is a matter of deep interest to the United States. The tens of thousands of Americans who rest in Europe’s cemeteries are a silent testament to just how intertwined our prosperity and security truly are.”

Fox joined other Euroskeptic politicians who lambasted the President for involving himself in British affairs. London Mayor Boris Johnson, the Vote Leave campaign’s de facto leader, accused Obama of “hypocrisy” on the BBC. Jacob Rees-Mogg, another Conservative MP, said “perhaps Obama just doesn’t like Britain” in a letter to the Daily Mirror.

The issue of Britain’s sovereignty cuts to the heart of the Euroskeptics’ argument for leaving the European Union. Fox, Secretary of State for Defense in the U.K. from May 2010 to October 2011, says that British parliament is ceding power to European lawmakers who tie their hands on trade and immigration.

Read more: Everything to Know About Britain’s E.U. Referendum

“We don’t have control of our borders. The concept of free movement means that anyone in the European Union can settle in the U.K. whether we want them to or not” says Fox, “and they get to spend 10 billion of our money each year as they see fit.”

The “Remain” campaign — led by Prime Minister David Cameron, and backed by a majority of the country’s MPs — appears delighted by any potential show of support from Obama, who is still highly popular in western Europe.

“He is a rockstar,” Labour Party MP Stephen Kinnock told TIME. “Brexiters are having a hissy fit because they know what President Obama has to say is highly influential and the British people have a natural affinity with our cousins from across the pond.”

Citing a recent poll by the Guardian that found turnout by young Brits would be key in keeping the country in the E.U., Kinnock believes Obama’s popularity in the U.K. will be enough to “galvanize” younger people in the June 23 referendum.

The President is not the only person from the American political establishment alarmed at the risks of Brexit. On April 20, eight former U.S. Treasury Secretaries— who served both Democratic and Republican presidents as far back as Richard Nixon—signed a letter in the London Times urging the U.K. to stay in the union, warning that it would open a “Pandora’s Box” on the world’s economy and risk damaging the U.K’s “special relationship” with America.

However, Fox told TIME that he believes such critics have underestimated the parlous state of the European economy. “The world requires greater liberalization and I am not sure they understand the implications of where the Euro is and that the Euro is a threat to global financial stability in a way the Sterling never has been,” he said.

Obama flies to the U.K. during a week-long trip taking him from the Gulf to Europe. He will lunch at Windsor Castle on April 22 to celebrate Queen Elizabeth’s 90th birthday, followed by a press conference with Cameron, and then dinner with Prince William and the Duchess of Cambridge. It is at town hall with young people in London’s Lindley Hall the next day that he is expected to answer questions on Brexit, before flying on to Germany.

While invoking the special relationship between the two countries, White House deputy national security adviser Ben Rhodes has stressed that the decision to stay or leave the E.U. “is a matter for the people of the United Kingdom to decide.” He also said that Obama’s views on the matter will be offered only if asked and that he will be answering “as a friend.” 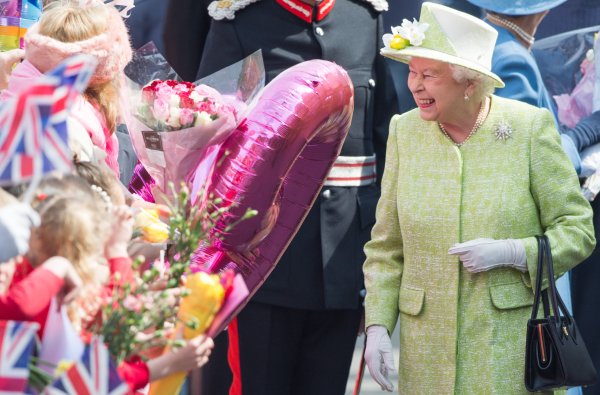 Watch Queen Elizabeth's Most Iconic Moments
Next Up: Editor's Pick