A former presidential candidate and lawyer Khaled Ali shouts slogans against President Abdel Fattah al-Sisi and the government during a demonstration in Cairo on April 15, 2016.
Amr Dalsh—Reuters
By Jared Malsin

Protesters in Egypt defied police on Friday staging some of the largest demonstrations in the country in more than a year in order to denounce the government’s decision to hand control of two Red Sea islands to Saudi Arabia. The protests follow a long period in which major demonstrations had vanished from the central districts of Cairo and Alexandria, ever since a military takeover in 2013 set in motion a lethal crackdown on political opposition and a law that outlawed almost all such gatherings. The scale of today’s demonstrations underscore signs of growing public discontent with the regime of the current president, Abdel Fattah el-Sisi.

An estimated 2,000 people joined separate demonstrations in Alexandria and downtown Cairo, where security forces fired tear gas to disperse some demonstrators. Video footage from Cairo showed demonstrators chanting “The people demand the fall of the regime,” the same iconic slogan used during the 2011 uprising that forced out President Hosni Mubarak.

Such demonstrations have been rare since August 2013, when security forces killed nearly a thousand protesters denouncing the military’s removal of the elected President Mohamed Morsi. The immediate trigger of Friday’s demonstrations came last weekend when Egypt’s cabinet announced the transfer of the two islands in the Red Sea, Tiran and Sanafir, to Saudi Arabia. The move came during a five-day visit to Cairo by Saudi Arabia’s King Salman. The Kingdom is one of the Egyptian government’s most important allies, donating billions in aid in recent years, and it supported the 2013 military coup that overthrew Morsi.

The Egyptian government claims the islands are in fact Saudi territory that Egypt has administered since the 1950s by agreement with the Saudi government. But the handover of the islands struck a raw nerve with the public, hitting at one of the core concerns of Egyptian nationalism: sovereignty over land.

Read More: What the Murder of an Italian Student Says About Egypt’s Security State

Tiran and Sanafir lie along the coast of Egypt’s most contested piece of territory: the Sinai Peninsula, where Egypt fought three wars during the 2oth century. The islands played a key role in those conflicts—in 1967, Egyptian President Gamal Abdel Nasser declared the Straits of Tiran closed to Israeli vessels. Israel treated the blockade as an act of war and launched a series of airstrikes that devastated the Egyptian armed forces and led to the capture of the entire Sinai Peninsula.

Egypt regained control over Sinai following the 1979 Egypt-Israel peace treaty. But anxieties about control over the land have cropped up in the political arena. Morsi, an Islamist leader and member of the Muslim Brotherhood who was elected president in 2012, had to battle outlandish rumors that he intended to give a portion of Sinai to the Palestinians. Morsi was overthrown in the 2013 military coup.

The announcement also came as Sisi’s government faced a growing list of public grievances. Egypt’s economy is struggling, and the central bank allowed a major devaluation of the Egyptian pound in March. Amid charges of high-level graft, authorities placed the country’s top corruption auditor under house arrest at the end of March. Separately, human rights activists are accusing the security forces of a cover-up after an Italian graduate student was found dead in January, his body showing signs of torture. The student’s case has also stoked anger within Egypt over longstanding state practices of torture and police killings.

Read More: Reflecting on the Legacy of Egypt’s Revolution

The protests on Friday ended without any of the major street fighting and furor that characterized the period following the 2011 uprising, but activists did set a date for another protest: April 25. That date matters—the 25th is an Egyptian national holiday that marks the Israeli withdrawal from Sinai in 1982. It’s known as Sinai Liberation Day. 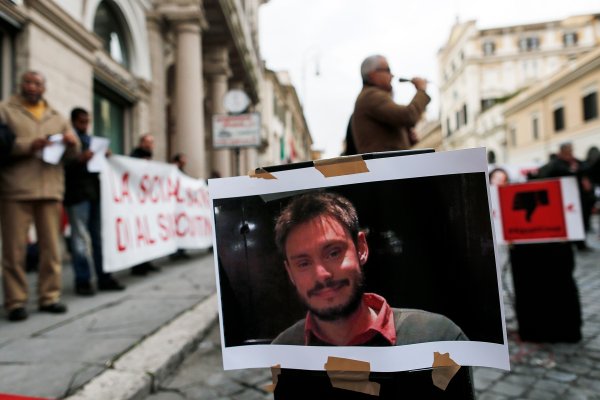 What the Murder of an Italian Student Says About Egypt
Next Up: Editor's Pick