Why The Night Manager Is Even Better Than Bond

Before he was the pill-popping Dr. House, Hugh Laurie dreamt of playing a spy. Specifically, the noble hotel-manager-turned-secret-agent Jonathan Pine from John Le Carré‘s 1993 novel, The Night Manager.

“I tried to option the book. I was far too late, and the great Sydney Pollack had it,” he says. “The world turns, and 20-odd years later it comes back to life, by which point of course I’m far too old and creaky and bald to play Jonathan Pine, but we have to resign ourselves to these processes.”

Now, in a bit of role reversal, Tom Hiddleston—best known for portraying Avengers villain Loki in the U.S.—is starring as the hero in the BBC and AMC adaptation of the novel. And Laurie, a lifelong comedian from British shows like Jeeves and Wooster, is playing an arms dealer Richard Roper described succinctly by Le Carré as “the worst man in the world.”

The Night Manager, which premieres in the U.S. on Tuesday, is slick, even for the network that produced Mad Men. With a reported budget of $5 million per episode, director Susanne Bier led her crew from the England to the Middle East to the Mediterranean islands to shoot the limited series, which plays like a six-hour James Bond film. It’s already a hit in England, and after a steamy sex scene involving Hiddleston, the actor’s rear end earned its own hashtag: #Hiddlesbum.

The set-up: Pine, the night manager of an Egyptian hotel, is recruited by British Intelligence to infiltrate the evil Roper’s inner circle. “It’s a burgeoning bromance,” says Hiddleston of Roper and Pine. “They’re drawn to each other. But at the same time there’s a very sophisticated game of cat and mouse, and you’re constantly guessing who is the cat and who is the mouse.”

Villains in spy movies are usually rotated out with each new installment. But as the sole antagonist of The Night Manager, Roper has a depth unusual for a baddie in an espionage thriller. Laurie took graduating from young upstart spy to older conniving villain in stride. “It’s the responsibility of every actor to love the characters they play, and Roper has charm,” says Laurie. “The devil always does because if he had devil tattooed on his head, we’d give him a wide berth.”

In the era of prestige television, it’s commonplace for networks to snag a star-studded cast and big budget: a limited-run series like FX’s Fargo can court movie stars like Kirsten Dunst and Billy Bob Thornton, while HBO is now dropping $10 million per episode on Game of Thrones. But from Mission Impossible to the Bourne films, sprawling spy stories have long been the dominion of the big screen, if only because TV shows can rarely afford to leave their country of origin to film.

BBC has begun to buck this trend, first with Sherlock, which aired its latest episode starring Benedict Cumberbatch in cinemas across the world, and then with The Honourable Woman, the Maggie Gyllenhaal show that ambitiously took on Middle Eastern politics. The Night Manager is its most cinematic show to date.

The comparison between The Night Manager and Bond is inevitable: Beyond the globetrotting tale, the opening credits mimic the imagery that made the Bond films so iconic. Hiddleston (very minor spoiler alert) even orders a vodka martini while sporting a smart suit at the end of the final episode. Fans have been wondering who will inherit 007’s gun holster since Daniel Craig rather dramatically (and possibly jokingly) suggested he would rather “slit his wrists” than make another Bond film. The Night Manager could easily be Hiddleston’s Bond audition tape, though the actor is quick to shut down rumors that he will inherit the role.

“Those conversations will continue to happen,” he says. “But they are rather different. Bond is a trained killer with a 00 license. Pine is someone who’s beginning his experience as a field agent. And I think John Le Carré’s characters more than those of [Bond writer] Ian Fleming are haunted by moral ambivalence.”

At least one critic has suggested that Laurie should play 007, a rumor that the actor says he’s flattered by but summarily dismissed: “I am not familiar with the mental health of this person, but that’s the craziest thing I’ve ever heard. I can’t climb stairs without my knees popping. I’m not the guy to be hurling myself out of helicopters, if indeed I ever was.”

And like Ian Fleming’s Bond, Le Carré’s characters are those of a bygone era—when surveillance meant boots on the ground, not just tracking someone’s phone. Parts of the 1993 story had to be updated for modern times: Most notably the character of Officer Leonard Burr transformed into Officer Angela Burr (Broadchurch’s Olivia Colman). Le Carré, who has a reputation for dismissing the cinematic adaptations of his work, even endorsed this change and others in a Guardian column.

But other aspects of the story were left untouched. “After the Cold War, I—and I’m sure many others—worried that not only would spies be out of work but so would spy writers,” says Laurie. “Le Carré, being the genius he is, found something even more compelling: the world of arms dealing and the skulduggery that is even now being revealed by the Panama Papers.”

Though the show will fulfill its audience’s bloodlust, it remains a psychological thriller more than a physical one. “It’s much more complex than the division of good and evil because Pine and Roper like each other, but Roper is a cynic and a nihilist, while Pine has a moral sensor. And that tension is played out under this umbrella of British manners and hypocrisy,” say Hiddleston.

Laurie agrees that Le Carré’s skills lie in breaking down the psychology of his characters.

“There’s a temptation to paint characters a single color, but humans don’t work that way. Hitler couldn’t bear cruelty to animals, as bizarre as that is,” he says. “I must confess to your readers that I’m smoking a cigarette at the moment, and yet later in the day I might go for a run. I mean, what on earth is going on? Those things are inherently contradictory. But that’s how people are.“ 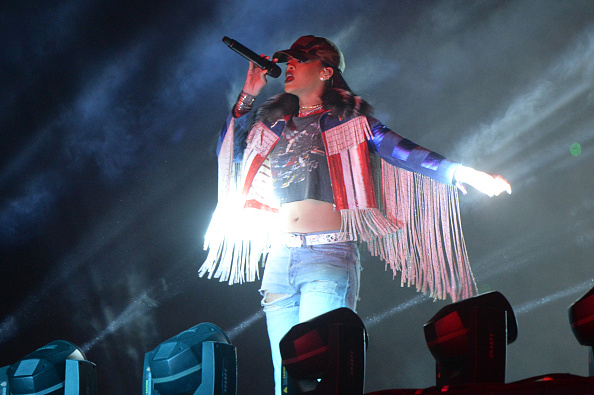 Taylor Swift Couldn't Handle It When Rihanna Performed With Calvin Harris at Coachella
Next Up: Editor's Pick